davevandewalle (50)in #cryptocurrency • 3 years ago

At the beginning of 2018, I was contacted by a couple of the executives behind Empowr, which is a social network that looks like Facebook, but acts like Steemit. We had a few discussions - about the platform, their plans for it, and, specifically, the launch of the coin that powers the system.

I liked the discussions, liked the team, and agreed to join up as a member of their Advisory Board. Full disclosure: this is an unpaid position, so I am compensated in coins.

Will It Take Off?

So this post might, at first glance, seem a little biased: since it's in my best interest, as a member of the Advisory Board, to see this coin succeed.

Rather than try to tell you that this post won't be biased, I'll just acknowledge that fact: I want to see it succeed, so I'm pulling for it. I like the people behind it.

However, I wouldn't be doing the platform any justice if I didn't point out some of the weaknesses I see.

Where the coin gets "powered," as far as I understand it, is less about sharing and voting like here on Steemit, and more about "closing the loop." 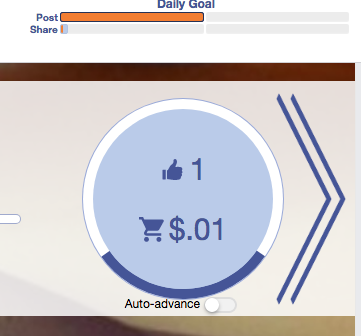 So you visit someone's page and either "like" a post or comment on a post. Doing this enough times - usually once or twice - closes the loop (photo above) and then you score points - empowr coins.

It isn't any more or less confusing, I guess, than other platforms - except once you involve selling stuff, it gets a little interesting.

People can sell merchandise in exchange for the coins - the prices, though, seemed to be really random; it's likely going to take some time for the network and the price to stabilize. For instance, I had the chance to buy a one-ounce silver coin for $500. Changing from the dollar sign to the empowr lower-case "e" will likely help me realize that there's a spread of 25-30 to 1.

In order to get your share of coins at the launch, you need two things by Sunday, April 15:

Well, that's what I'm waiting on, too. It will be interesting to see where the coin/token gets traded, and whether or not there's a price spike once it is traded somewhere.

As For The Platform...

My biggest issue is, frankly, the lack of engagement. I don't have real discussions with people - half of the time, folks are liking my posts just to close the loop, the other half, it seems, they're commenting on my post with something akin to "closing the loop."

BUT...I see the potential and the promise for this coin, especially with the Facebook data noise. Will be watching closely. Today 1 year ago you joined SteemIt
Thank you, for making SteemIt great and Steem on for more years to come!
(You are being celebrated here)
$0.00
Reply
[-]
steemitboard (66) 3 years ago

Congratulations @davevandewalle! You have received a personal award!