csreport (25)in #cryptocurrency • 4 years ago

The original article with high quality charts can be found at CryptoStone Report. 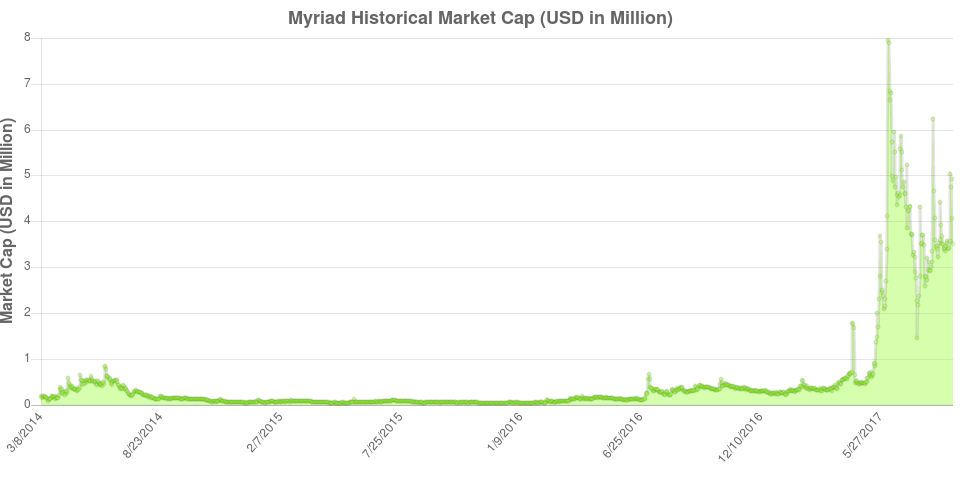 Myriad (XMY) has been launched by 8bitcoder since February 2014. Unlike most of the coins at that time, XMY was one of the first coins to implement 5 different hashing algorithms. Multi-algo was proposed as a way to increase the security as well as uphold the egalitarian idea - a coin for everyone. The multi-algo feature in Myriad has sparked several spin-offs, one of which is DigiByte (DGB) on Sept. 1st, 2014. The others include Saffroncoin (SFR), Digitalcoin (DGC), Unitus (UIS), Verge (XVG) and Auroracoin (AUR).

Huntercoin, launched in late 2013, was actually the first coin to use multiple Proof-of-Work (PoW) algorithms (SHA256d and Scrypt), but its focus was not on mining, rather on a blockchain-based game that produced the large majority of new coins.

At the time of writing, Myriad white paper is not available. XMY was a spin-off of ZetaCoin (ZET), an open source crypto-currency based on the Bitcoin protocol. Myriad has a 1/10 block processing time of Bitcoin - 1-minute payment transaction time. Back in 2014, Myriad was one of the pioneers advocating multiple Proof-of-Work (PoW) algorithms, including SHA256d and Scrypt for ASIC miners, Skein and Myr-Groestl for GPU miners, and Qubit for GPU and CPU miners. Each algorithm has 20% of the network total hashrate, providing exceptional resistance to 51% attacks. In other words, the attacker(s) will have to compromise almost 3 different algorithms to get to 60%. Taking over the entire hashing power of 3 algorithms is nearly impossible in reality. The technical novelty Myriad stands behind was also featured in “Mastering Bitcoin: Unlocking Digital Cryptocurrencies" and mentioned by Andreas Antonopoulos. 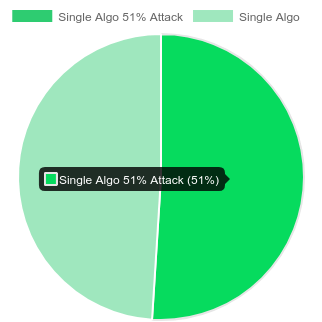 In August 2015 Myriad hard-forked to allow merge-mining on its SHA256d and Scrypt algorithms in an effort to improve security and achieve a more stable hashrate on those two algorithms. At this time the target block time for each algorithm was also changed to five minutes (previously 2.5 minutes), to achieve an overall block target time of 1 minute (previously 30 seconds); this change will stretch the emission curve out by a factor of 2x, to approximately 20 years.

In August 2016, Myriad has replaced Qubit with Yescrypt at block 1764000 through mining consensus to preserve mining decentralization - the first of its kind replacing a mining algorithm via mining consensus.

SHA256d: Double SHA-256 hash algorithm, a cryptographic hash achieved by applying the regular SHA-256 hash twice, by first applying SHA-256 hash to the data and then once again to the resulting hash.
Scrypt: A password-based key derivation function created by Colin Percival. The algorithm was specifically designed to make it costly to perform large-scale custom hardware attacks by requiring large amounts of memory. Its simplified version is adapted as a proof-of-work scheme by a number of cryptocurrencies.
Skein: A cryptographic hash function based on the Threefish tweakable block cipher compressed using Unique Block Iteration (UBI) chaining mode, a variant of the Matyas-Meyer-Oseas hash mode, while leveraging an optional low-overhead argument-system for flexibility. Its design combines speed, security, simplicity, and a great deal of flexibility in a modular package that is easy to analyze.
Myr-Groestl: A modified cryptographic hash function based Groestl by “combining” 512 bits into 256 bits via SHA256.
Qubit: Originally a CPU-only algorithm, Qubit combines 5 competitors in the NIST SHA-3 hash competition - Luffa, Cubehash, SHAvite, SIMD and ECHO.
Yescrypt: A Scrypt based cryptographic hash function designed by Alexander Peslyak. More information can be found here.

Creating and maintaining fair mining opportunities and rewards is embedded in Myriad by design. Myriad was not pre-mined. Despite each algorithm has its own independent difficulty, the same difficulty adjustment mechanism is applied in all of them. Each algorithm finds the next block and creates coins at the same rate, on the premises of which, miners can be assured that they can compete equally for the block rewards. In other words, block rewards are given for contributing resources to the processing network no matter what kind of hardware used (Even some random android devices! Yes I am talking about your smart phone!)

Initially, the target blocktime was 30 seconds, or 150 seconds per algorithm. On the 12th of July, 2015, the community decided to increase the target block time to 60 seconds, or 300 seconds per algorithm, effective at block 1,401,001. At the time, Myriad suffered from low hash rate and extensive difficulty hopping on Scrypt and SHA256d, causing the actual average block time to be over 50 seconds. In addition to enabling aux-PoW on Scrypt and SHA256d, the increase in target block time lead to greater consistency on the network, without affecting fairness of distribution. To put Myriad’s Rich List Top 385 into perspective in text, there are currently: 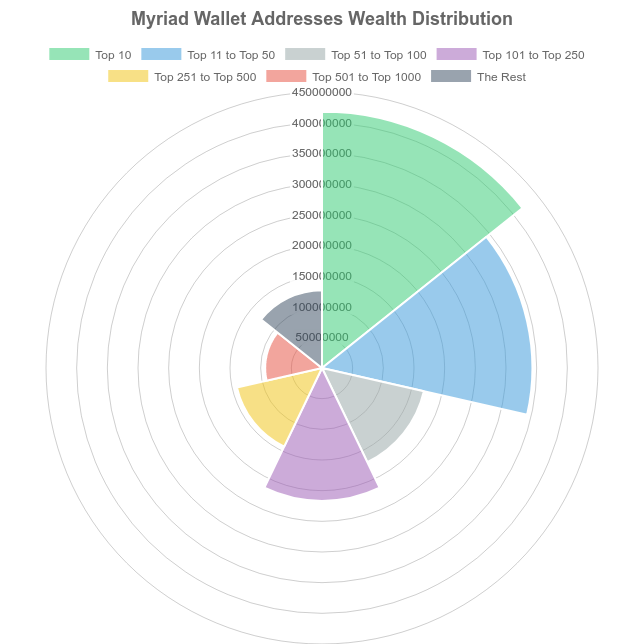 Since Myriad’s wallet supports multiple addresses, it is difficult to estimate how the wealth is distributed by wallet. We have found an estimate of 20 largest wallets and their individual holdings through Cryptoid.info. Several of them with a few hundred to over a thousand addresses possibly belong to the exchanges.

The road map of Myriad is hosted in Trello. The dev team has been working on a new core release (0.14.2) backed by a 3-million bounty program, as well as a JSWallet for iOS. The volunteer-based PR team has been vigorously creating marketing materials such as promo videos, new official websites, BitcoinTalk Post, Facebook Page, Slack/Telegram/Discord chat rooms, inforgraph, and so on. Some of the aforementioned metrics are formulated solely by CryptoStone Report, the detailed analysis work could not presented due to precautionary measures for the protection of intellectual property. 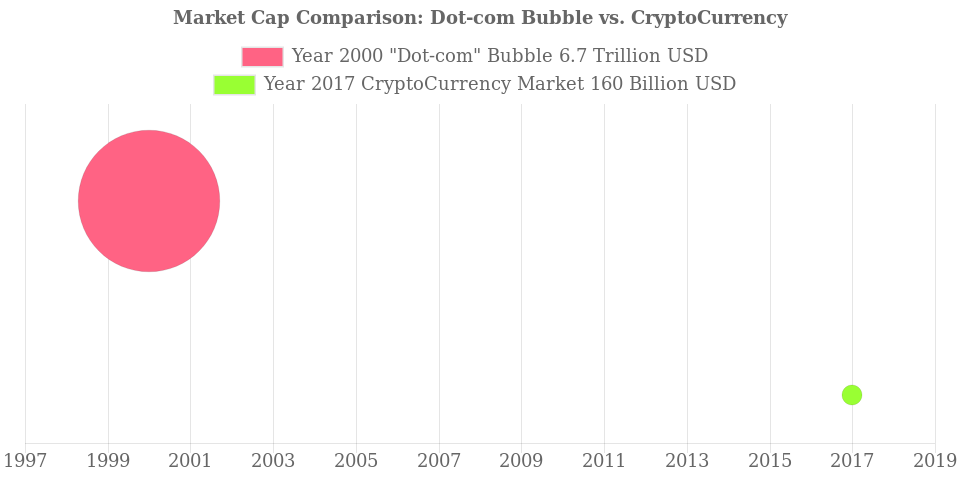 Since the beginning of 2017, the cryptocurrency market has entered a general bull trend. The astronomical growth (almost 1000%) in market cap keep people wondering if we are having another “dot-com” bubble soon. The truth: we are far from a bubble yet! One day before the burst (Mar. 10, 2000), the combined values of stocks on the NASDAQ was at $6.71 trillion, whereas current cryptocurrency market cap is only 2% of that. More information about log charts can be found at Investopedia.

Compared to the market cap YTD growth of other multi-algo cryptocurrencies, Myriad is still largely undervalued in our opinion. Given the bullish sentiment of cryptocurrency market this year, the large influx of new retail and institutional investors would soon discover undervalued coins, such as Myriad.

Disclaimer: The information contained on this website is of a general nature and intended as a guide only. It is neither to be construed as financial advice nor to be regarded as a definitive analysis of any financial, legal or other issue. Nothing presented represents the viewpoints of any corporation or organization and all material is for illustration and discussion purposes only.

Congratulations @csreport! You have completed some achievement on Steemit and have been rewarded with new badge(s) :

Congratulations @csreport! You have completed some achievement on Steemit and have been rewarded with new badge(s) :

I totally agree! Check out the Myriad post on my blog to see why :) #upvoted