cryptotaofficial (56)in #cryptocurrency • 3 years ago (edited)

As I mentioned in the previous posts there exists a huge chasm between the popularity of user-generated content and its authors' ability to convert the number of views into revenues. The difficulty of making money off YouTube channels is ubiquitous. There is a remarkable story of a guy who had a channel dedicated to his fishing activities. His channel had a decent number of followers, but in three years of posting videos, the guy managed to make only about $100 through AdSense advertisements.

I think, maybe, the whole concept of monetizing content through ads is not the brightest idea. Ads don't really fit in the context of watching videos. Let me explain. For example, when I search something on Google some of the positions among my search results are marked as [Ad] and while, as you might've guessed, those are ads, in this case, they are relevant to my activity. Because if I search for something, it's likely that I might also want to buy something related to my search. This is why those ads are sometimes perceived not like ads, but as legit search results. It's different with YouTube though. When I watch videos the farthest thing from my mind is the thought about buying something. Therefore I perceive any ads on YouTube as some meaningless background noise, and mostly I just ignore it. The point is, the popularity of content doesn't automatically translate into the potential to monetize it through ads. 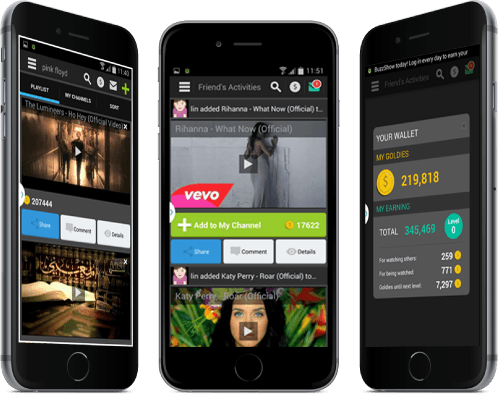 Realizing this fact, many platforms experiment with the different monetization approaches. Among them the system of patronage that was tested by Patreon and proved to be a working model, where content creators receive money from their followers to whom they provide exclusive and premium content. Another model of content monetization is turning the whole content platform into a miniature economy. This approach was first successfully employed by Steemit. According to this model, all the activities of platform users have some monetary aspect to it. For example, if I like somebody's post, it automatically leads to the transfer of some of my tokens to the post author.

BuzzShow is a startup aiming to apply this concept of token micro-economy to its video hosting platform. In short, it's like YouTube, but with intrinsic monetary aspect to it. The project is based on blockchain and uses special Goldie tokens as a means of exchange in its ecosystem. According to the plan, most of the user activities on the platform will be accompanied by a monetary exchange. Platform participants will receive tokens for uploading videos. When somebody watches the video, both he(she) and the creator of the video will receive tokens. A special group of users - so-called Curators will receive tokens for monitoring uploaded content and flagging inappropriate or extremist videos, or videos violating copyrights. Also, sharing and promoting videos will also bring token rewards. As I see it, (and observing how this model works on Steemit) this concept of monetization of user activities makes the whole process of participating on the platform more interesting and stimulates platform users to be more active. For example, there is a chance of getting immediate monetary returns from a single uploaded video, if it suddenly becomes popular.

Another interesting aspect of the BuzzShow project is that it uses a decentralized file system to host its content. Interplanetary File System (IPFS) is a relatively new technology, and it's based on the idea of utilizing the resources of multiple computers scattered throughout the Internet by creating a peer-to-peer distributed network for storing data. It's similar to the BitTorrent protocol, and in many ways, it's more reliable and robust model than, say, storing data at the centralized data centers. Without getting into technical details, I'd give just one example: The data center can be easily shut down with all its data becoming unavailable. The BitTorrent network is impossible to shut down (which is emphasized by the fact that so far there weren't many successful attempts to ban Torrents. It's really almost impossible technically)

One of the things that make the BuzzShow project look promising is that it already has a working prototype with more than 15,000 registered users and about 2,000 video channels.

This post has received a 0.04 % upvote from @drotto thanks to: @cryptotaofficial.