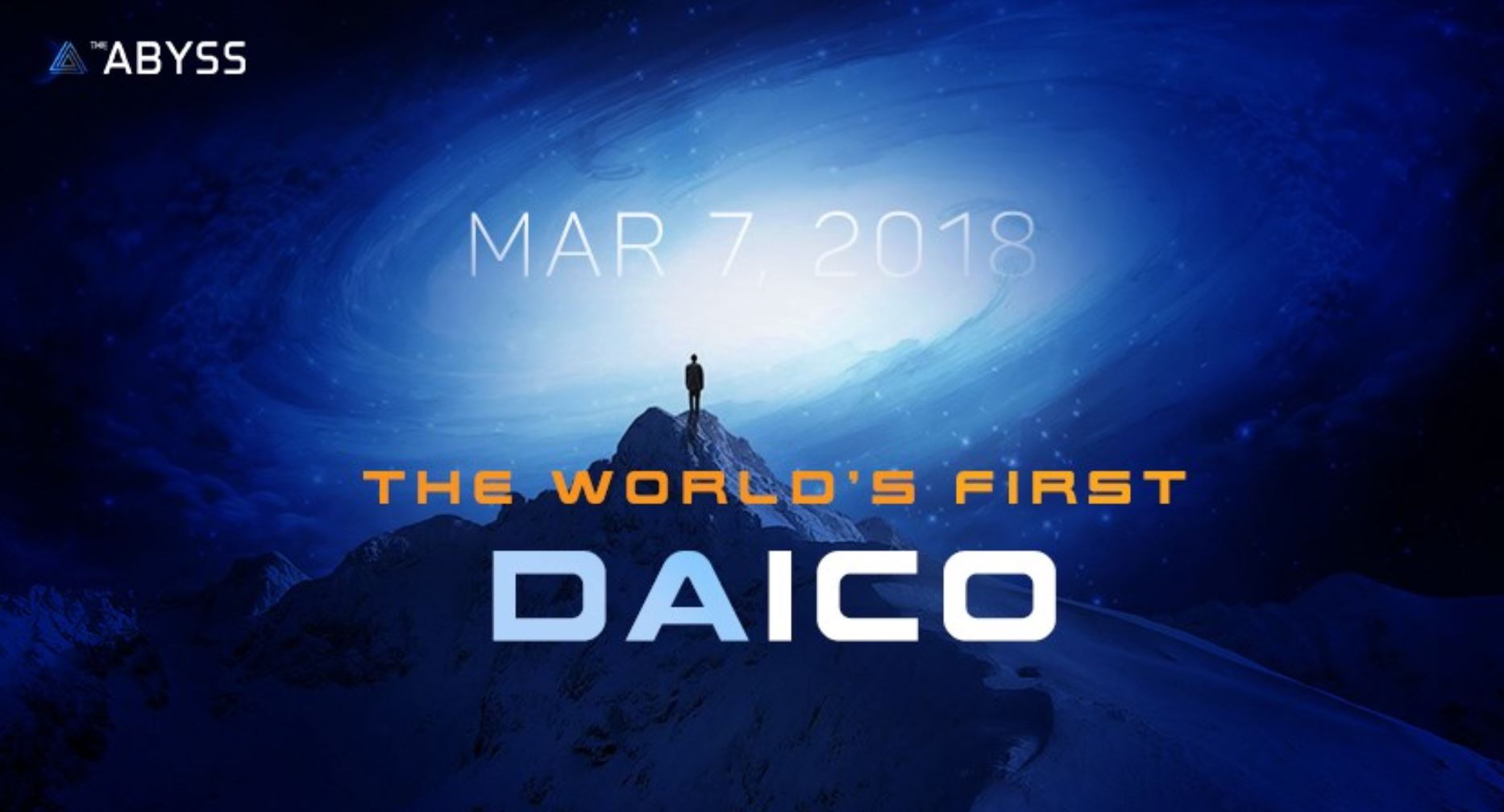 The gaming industry is on the rise in this age of digitalization but for any industry to grow it needs various new strategies and plans. The old redundant and obsoletes methods will be overshadowed by some new ideas. One such new platform is ABYSS which is targeting to revolutionaries the gaming industry. Their product is not only useful to the developers but also to the gamers who gain absolutely nothing for playing games in the current scenario.

Developers today face a major issue in advertising their product and make it stand out in the plethora of games getting launched every day. All the developers compete with each other for audience and the audience is always divided.

The Abyss platform is aiming to ‘unify’ the gaming industry by creating a collaborative ecosystem rather than a competitive one. They will implement the principals of ‘multilevel referrals’ on their platform which will benefit not only the developers and also the gamers. The integrated gaming industry will become much more productive.

The developers will get benefited from not only from their own games but also from referral payments from other games within the platform. The gamers will be benefited from the referrals too at a rate of 4% for the first referral followed by 2% for the next two in the chain and 1% for the subsequent two. The gamers will also earn from in game achievements. (https://www.theabyss.com/)

Gaming industry is growing rapidly and its income level is approximately +100 billion USD which is expected to increase to 160 billion USD approx by 2020. ABYSS is aiming to build an ecosystem where the users are motivated to indulge in playing games not just for the sake of leisure. This is made possible by the advent of rewards for the gamers.

They also plan to attract the developers by decreasing their ‘advertising cost’ by giving them the required traffic and also by providing them with an alternative income source in doing referrals for other games on the platform.

It will be the ‘new’ digital distribution platform built on ethereum blockchain. ‘ABYSS’ tokens are ERC20 standard and can be used for the transactions on the ABYSS platform both by the developers and the gamers. These tokens are interchangeable in the fiat currency instantly.

The ‘dual payment strategy’ of ABYSS helps the users to pay in fiat or in ‘ABYSS’ token with special discounts for the ABYSS transactions. The ABYSS platform allows ‘unified authentication’ avoid users from all the hassle and make the platform easily accessible yet is a very safe one.

Benefits for the developers

There are various financial benefits too like developers can receive their payment in fiat currency regardless of their initial payment. They also get access to very vital player statistics which will help them grow.

Another feature of peculiar interest for the developers is the feedback mechanism. The ABYSS platform will enable developers to launch alpha and beta versions of their platforms and get honest opinion from the target audience. This will help the developers to make modifications according to the user’s needs.

The developers thus will be aided not only in content advertising but also in content creation. The advertising system is very expensive and non-productive thus ABYSS is solving major issues for the game developers.

Being an ecosystem of games ‘The ABYSS’ will be an unlimited resource for the players. From spending their leisure time on the platform they can not only play the coolest of the games available but also earn simultaneously. The referral earning system for players is analogous to that of the developers. Below is the referral income table for the players as well as the developers. (https://www.theabyss.com/) source: (https://theabyss.docsend.com/view/nff9r2c)
Users can also monetize their own created content like commentary, fan art etc through which they can earn while having fun with their favorite games. Players can hold internal auctions and can earn on the platform in the form of ABYSS tokens which can later be converted into fiat money.

Players can gather and form a syndicate which gives them numerous opportunities to earn. This will attract millions of users to the platform who can earn while they play. The aftermath will be a ‘revolution’ in the gaming industry. 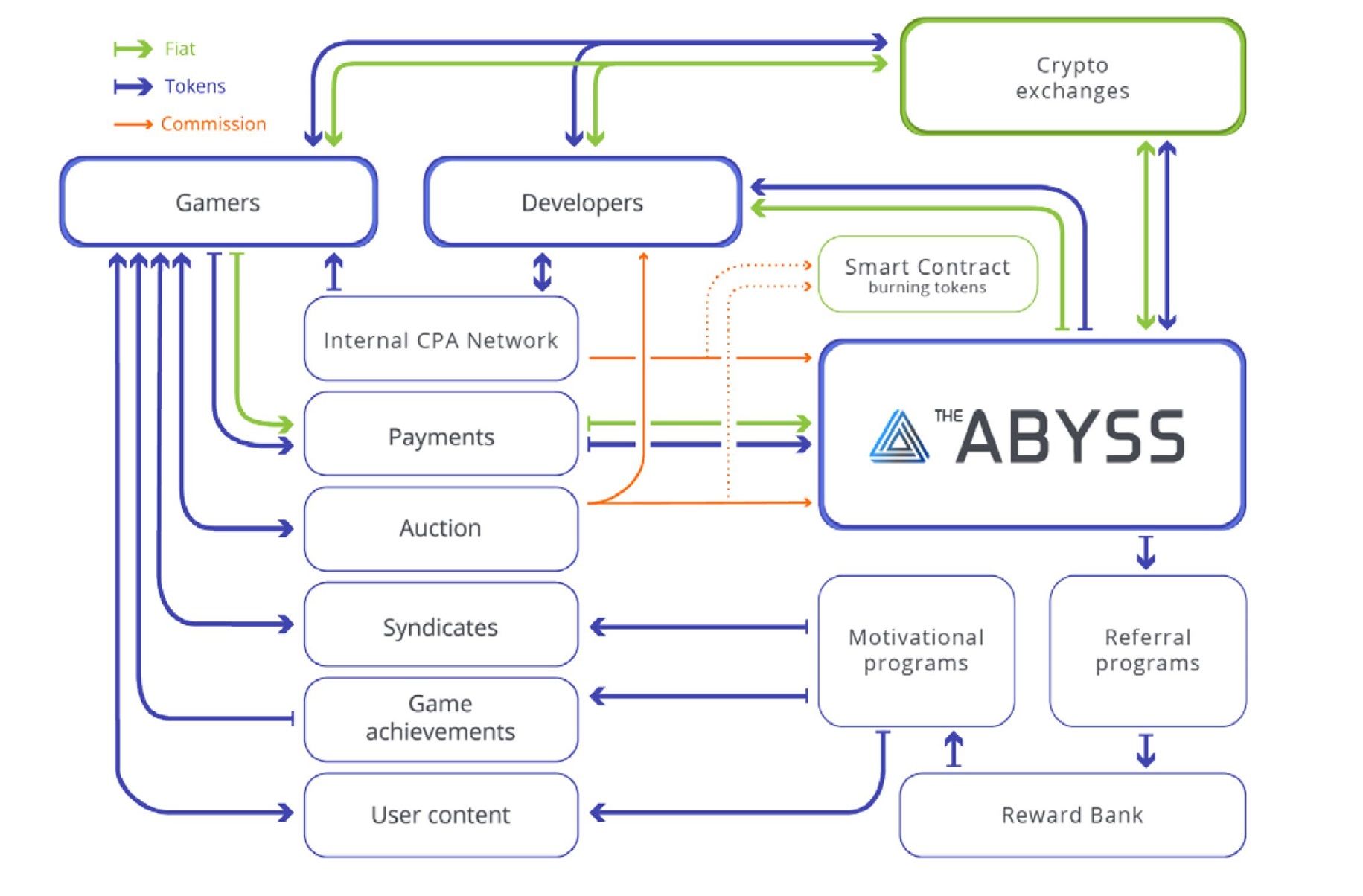 The above schematic diagram shows how the platform will function for developers as well as players. The motivational programs will award 60% for the game achievements, 25% for the syndicates and 15% for content creating. This program will be funded on the platform by the reward bank (shown in the diagram above). The reward bank will be funded through the budget from broken referral chain or from reserve (kept in the preliminary stages of the platform).

This motivational program will attract user to the platform and will keep them engaged. These users will bring in more users to avail the benefits of ‘multi referral system’ and all this make sure that the platform will become very successful.

Investment opportunity at the ABYSS:-
(https://www.theabyss.com/)
The ABYSS token sale works on the principles of DAICO model. This fundraising model ensures transparent and secure ICO. It enables the investors to control the fund withdrawal limit and thus protects investors from fraudulent ICO’s. The ABYSS is much more advance and secure version of the contemporary DAICO model.

So is this suppose to do good? ...is it a good platform?

yup. What I like about it is that It is more of a collaborative gaming platform rather than a competitive one. it stands out

Thanks Robus. I will be posting many of my picks of up coming start ups so stay tuned !