basiccrypto (42)in #cryptocurrency • 4 years ago (edited)

Part 2 of our analysis on the NEO Smart Economy, follow the link to catch up on Part 1. Today’s focus shifts to the Economics of the NEO Blockchain and is targeted for those interested in how rewards are generated and the schedule it will follow.

Every blockchain has a different ecosystem and NEO is no different. As discussed in part 1, NEO grants shares (what you would buy on an exchange) that give you voting rights and the right to dividends in the form of GAS. Which in turn allows the holder to pay for their use of a NEO share. Here is a brief list of what holding each asset is good for.

To help understand the interaction between NEO and GAS Reddit user /r/Encephalomagna has put together the following infographic. 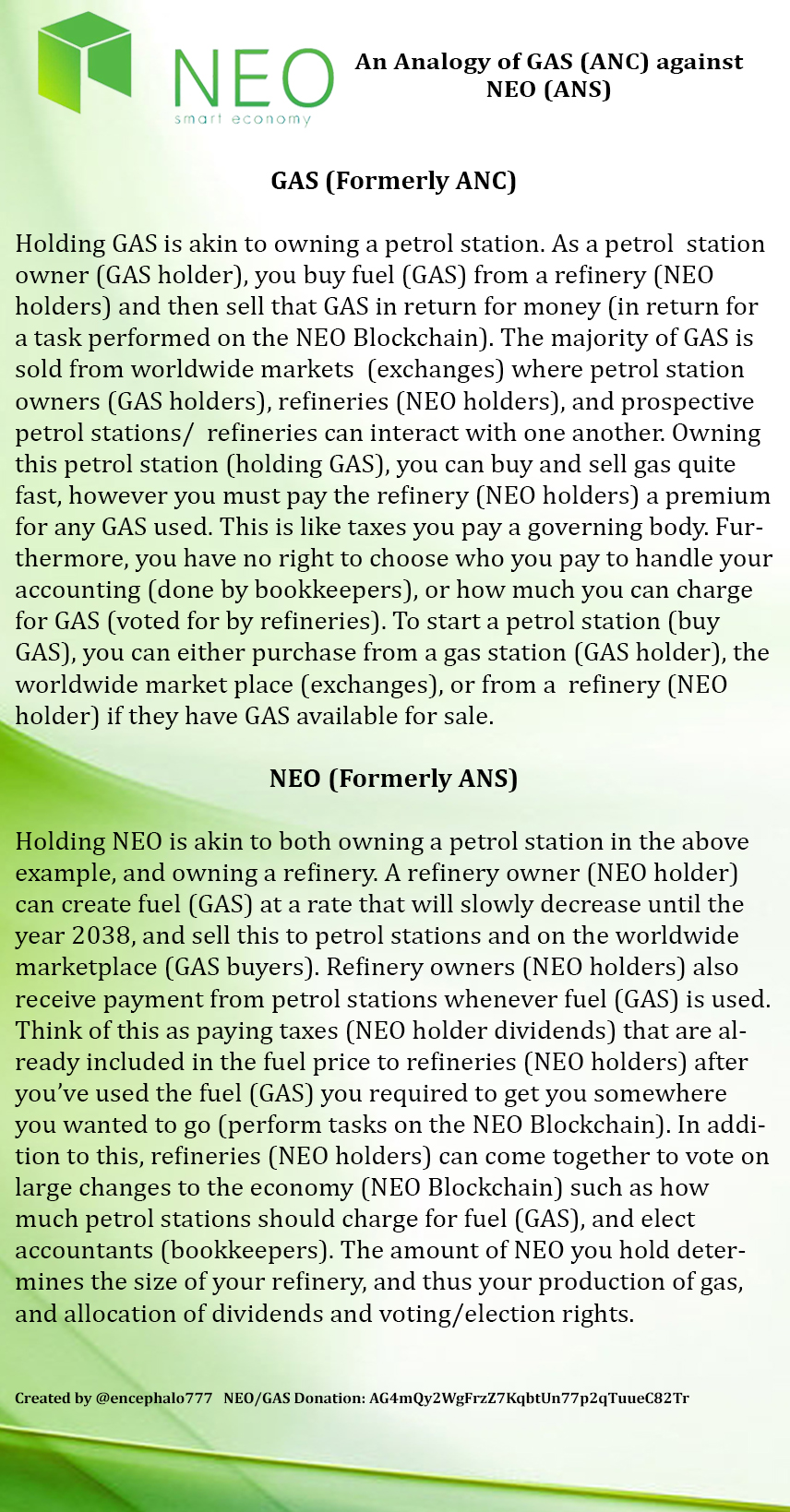 At the Genesis block 100,000,000 shares were pre-mined and split up amongst the defined parties in the whitepaper.

What does this mean? It means that while BTC, ETH, LTC, and pretty much every other cryptocurrency ever created has the notion of splitting a coin into many small chunks with the beauty of decimal places. NEO uses the idea of shares, much like the fact that you cannot own fractions of shares in Amazon, Google, etc. you cannot own fractions of shares of NEO. To complicate matters, exchanges allow you to trade in fractions of NEO shares and most charge a fee to withdraw your shares in FRACTIONAL amounts! Long story short, be sure to plan for your exchanges fees and don't get caught sending fractional shares to your wallet as they will be lost forever!

Here is an example to illustrate how you would lose your decimal shares from exchange to wallet:

To continue the analogy of NEO shares to Stock shares, there are still a handful of stocks that pay a dividend that are typically proportional to profits. For a stock, the dividend distribution can be in cash, a reinvestment plan, or even be paid out in more stock of the underlying. In the NEO realm, a dividend is paid in GAS, which can ONLY be generated by holding coins in a wallet address, not an exchange. If you are not generating GAS then you will not be able to pay for services on the NEO blockchain. It is possible to buy and sell GAS on exchanges if you are short on the asset, but be sure to ALWAYS control your crypto keys.

This section is intended to break down the mechanics of the NEO blockchain. One interesting section in the whitepaper, that is not expanded upon, is that the block time is 15 seconds but can be altered if sufficient network effects are met to handle shorter block times and increase network throughput. They anticipate in the future that most blocks will be generated every 1 second (completely altering/speeding up the time frame presented below). Here is the quote for reference:

At the moment, the block generating rate is manually set at 15 seconds. With low enough latency in inter-nodes connection in the future, most blocks will be generated by every 1 second. With the bandwidth at 100Mbit/t and external cryptographic computing hardware, the Antshares Blockchain is capable of handling thousands, if not tens of thousands, of transactions per second.

We have also put together this handy spreadsheet that you can copy and use for your personal use when analyzing the amount of GAS your wallet should be generating by entering your NEO balance. NOTE: As discussed above, it is required to have your main shares in a wallet outside of an exchange for this to take affect.

The third tab of the spreadsheet provided above is covered below to give you an idea of what kind of dividends can be generated. We are not going to speculate on the price of GAS or the underlying and will leave that to your own analysis.

One way that NEO establishes itself from Ethereum is the fact that it doesn't require engineers/coders to learn a new language (Ethereum requires knowledge in Solidity). Neo achieves this by being compatible with all of the major coding languages. From our perspective this will drive adoption by lowering the barrier to entry (learning curve) for developers. The current supported languages are:

While this is important, it is also worth noting that as long as the code has an interpreter/converter it would appear the above list is expandable. The following picture is a great introduction to the NEO Virtual Machine. The NEO team is certainly not without a sense of humor as their whitepaper on the topic of VM's and which is the best design, I found this gem!

Naturally enough, we are faced with a question: Is it possible to have a new design that has the all the pros of the aformentioned VMs?

Of course, an absolute perfection absolutely exists in nowhere, otherwise why would we have such differentiation. But we can start with a design that has all the aforementioned pros under certain scenarios.

Another aspect of running the NEO Virtual Machine are the platforms they are designed to run on. While the majority of enterprise grade deployments are running more and more on the Linux OS, it is important to note how many options the NEO team offers and has plans to offer in the future.

NEO provides a framework for the digitalization of real world assets and is set on the goal of making it accessible to everyone.
Combining this with the fact that it is the first blockchain technology coming out of China clearly has the cryptosphere excited and baffled at the same time, figuring NEO does the same thing as already established technology. Hopefully this has helped introduce key concepts to the architecture and ecosystem that NEO is offering to the digital world.

Thanks for sharing! Keeps me up to date :-)

Interesting blog. I was about to post a similair thread. It's surprising how much uneducated investors the crypto space has. You still see people invest in this shady and scammy coins. I was researching a way to do better investment analysis on the current cryptos. I really advice people to take a look at: https://www.coincheckup.com I'm using this site that gives in depth reports on every tradable cryto in the market. On: https://www.coincheckup.com/coins/Neo#analysis To see the: Neo Investment research report.

The column for annual earnings for a 1 million NEO holding are wrong.

Another great post thanks so much for sharing I look forward to reading more of you thoughts. Cheers J