A Bitcoin Enthousiast Trolled the Federal Reserve on Live TV 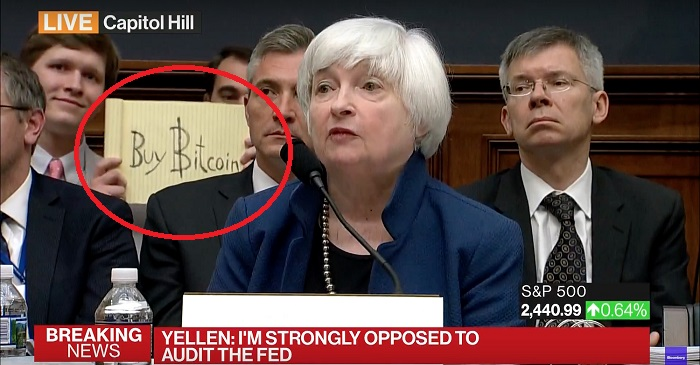 Last week, former JPMorgan Chase chief equity strategist and co-founder of Fundstrat Global Advisors, Tom Lee, laid out his predictions for where the price of Bitcoin is headed. And in Lee’s view, it’s headed way, way up:

“We believe one of the drivers of bitcoin is crypto-currencies are cannibalizing demand for gold. Based on this premise, we take a stab at establishing valuation framework for bitcoin. Based on our model, we estimate that bitcoin’s value per unit could be $20,000 to $55,000 by 2022.”

The incident was caught on camera, and the Bitcoin supporter was escorted from the hearing room on the grounds that the sign violated House Committee rules. Yellen herself didn’t comment on the subject of cryptocurrencies during her testimony.

This young sign guy is a true HERO. I'm going to send him my hard earned $10 as a tip to this awesome man. I admire at his passion, and braveness to do what he did. He made this day noted well in the history of humans. Die FED die !

The people have spoken! I hear he made about 4k from donations haha.

Actually, last time I looked it was $15k.

hahahaha I love he! xD

HAha j'adore la tête du gars, il est TROP heureux avec son petit panneau :-)
Just in case you have not see it, we are planning a meet up in Brussels on 21 of July -> Join us ! It would be so cool to meet all the belgian steemians !

This was just priceless. LMAO Thanks.

What an awesome way to photo bomb Janet Yellen.