Is Substratum a scam?

anonramblings (32)in #cryptocurrency • 5 years ago (edited)

My interest in Substratum began when I first heard about its ability to be used as a VPN. I use a VPN on a daily basis and would love to have another alternative when the one I am using goes down. I was also intrigue by the idea that one could earn tokens by acting as a node for other users. Being paid to help others sounded super cool. I was so hyped about the technology that I almost bought some tokens without doing my due diligence. Luckily, my resolve to invest intelligently won out.

I first became concerned that Substratum was a scam when I began scrutinizing the behavior of the CEO/Founder, Justin Tabb. I expected the founder to have his head buried in code to only pop it out when some coding milestone had been reached. However, what I had found was a founder that was spending a lot of energy promoting his token. Now for some coins this makes some sense . However, my thoughts are that if the technology works it will sell itself. Certainly, being the first one out of the gate is more important than pumping the short-term token price. That is of course unless it is a scam. A true pump and dump.

Another issue I had was with Mr. Tabb's ignorance when it came to his self stated target market, China. He seems to know very little about how such a technology would be received by the general populace or the government. I wrote a separate post on that issue alone. You can read it here: https://steemit.com/cryptocurrency/@anonramblings/substratum-and-wabi-will-likely-fail-to-have-long-term-success-in-china

These concerns I put to the periphery while I still considered buying some tokens if the price was right. However, now I am leaning towards staying away from Substratum altogether due to the reasonable probability that something shady is going on. I have come to this conclusion after viewing the most recent Youtube posting by Mr. Tabb. You can watch that on his channel here:

I do not know anymore than the average internet user about the technology behind Substratum. However, I do have my gut instincts. There are three shady aspects to the video. The first is that in the beginning of the video Mr. Tabb states that he is going to try to film the video uncut. This jumped out me as super strange. Most of the videos I watch on Youtube are edited and I prefer it that way. The editing allows for concise and entertaining content. So here Mr Tabb was signalling that this video would require more trust than an average Youtube video.

Now, many would rightly say that I am nitpicking which I would normally agree which leads me to the second problem I had with the video. Unbelievably, there were in fact undeclared edits to the video. Theses edits become obvious once you know to look for them. These cuts take place at 8:42 and 9:49. What has changed in these cuts is the screen in which Tabb is showing off his technology. In other words, the focal point of the video has been edited after Mr. Tabb proclaimed it would be an unedited video.

Why was the video edited after stating that it would not be edited? Who knows? Mr. Tabb responded in the comments that his daughter had somehow messed up the first take. But that explanation just begs more questions and loses more trust. Why not reshoot the whole video again? It was a short video and not technically difficult at that. Or another option would be just to edit out the initial remarks that the video would be unedited. Why leave that in the video? Why was the screen the focus of the edits?

The third problem I had with the video is when Mr. Tabb is demonstrating his technology it doesn't appear to work. Now again, I am just an average Joe. So the explanation may be easily known by people that are slightly more technically proficient. Mr. Tabb tries to show the loading of a webpage by the regular internet and by using the Substratum network. The regular internet does as expected. It attempts and succeeds refreshing the page. However, when the Substratum network is tried the page doesn't seem to refresh. I come to this conclusion because the circular arrow at the top of the Chrome browser stays in motion. Now when that happens to me, the page is attempting to refresh without success. The other curious aspect to this demonstration is that Mr. Tabb did not try to open a new page. Why is he just refreshing the page that he is on? That is very strange to me.

I hope that some of these observations can continue a conversation about the legitimacy of the project. Let me know what you think in the comments below. I try to upvote all comments.

Important Update!
The uncut video appears to have been uploaded to Youtube. You can watch it here:

My take on it is that It does seem to backup the reasoning given for the edit.

Nice topic,
I thought to myself something was fishy when DataDash admitted he took payment for promoting SUB recently ...
And that made me wonder...how many other YouTubers are in on this scam...
then this 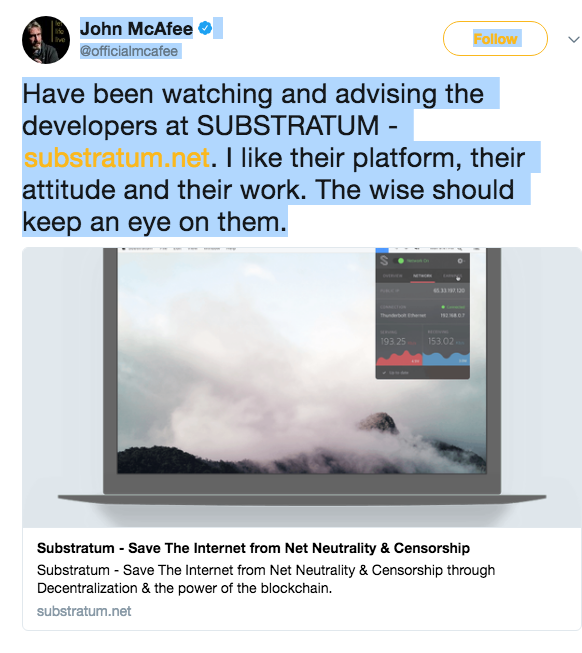 He's known for taking money to shill coins...that in itself made me wary of it totally.
No reputable company would be using him as a PR guy .

Good points. I didn't know McAfee was shilling for it. I have no clue how it will turn out. I am still hoping for the best but obviously I feel it is sketchy. I was very disappointed to see DataDash took that money to do an undisclosed promotion. He is young so I don't want to judge too harshly. I did unsubscribe though.