The Moral Case for Investing in Cryptocurrencies

The return on investment alone is enough. But there is also a moral, philosophical and political case for owning cryptocurrencies.

I was originally drawn to precious metals for their limited supply, unique utility and ability to instill fiscal responsibility in a monetary system. The investment returns haven't been too shabby either, particularly with well-timed investments in junior mining stocks.

But nothing has compared to the opportunities presented by cryptocurrencies. I now advocate for owning both precious metals and cryptocurrencies, believing they are complementary assets.

Bitcoin caught my attention in the early days, at ridiculously low prices. I read an article about bitcoin randomly, liked the concept and bought a small amount. I forgot about it for well over a year, as the price didn't move much. One day I came across another article about the meteoric price rise of bitcoin and was astonished at the value of a small account meant to test the waters of this cool concept called a cryptocurrency. As prices continued higher, I started to understand the true potential of bitcoin as a currency and blockchain as a disruptive technology.

The book titled "The Creature from Jekyll Island" by G Edward Griffin instilled a healthy distrust of the government and banks. Those beliefs were later strengthened by a number of online documentaries discussing the origination of the Federal Reserve and the money creation process. In the simplest of words, a collusion between some of the wealthiest and most prominent bankers of the era to gain control of the monetary system of the United States.

If this sounds far fetched or you haven't come across these concepts yet, see the following:

No matter your political persuasion or view on the power struggles of the early 1900's, there is no denying the impact to the value of the U.S. dollar: 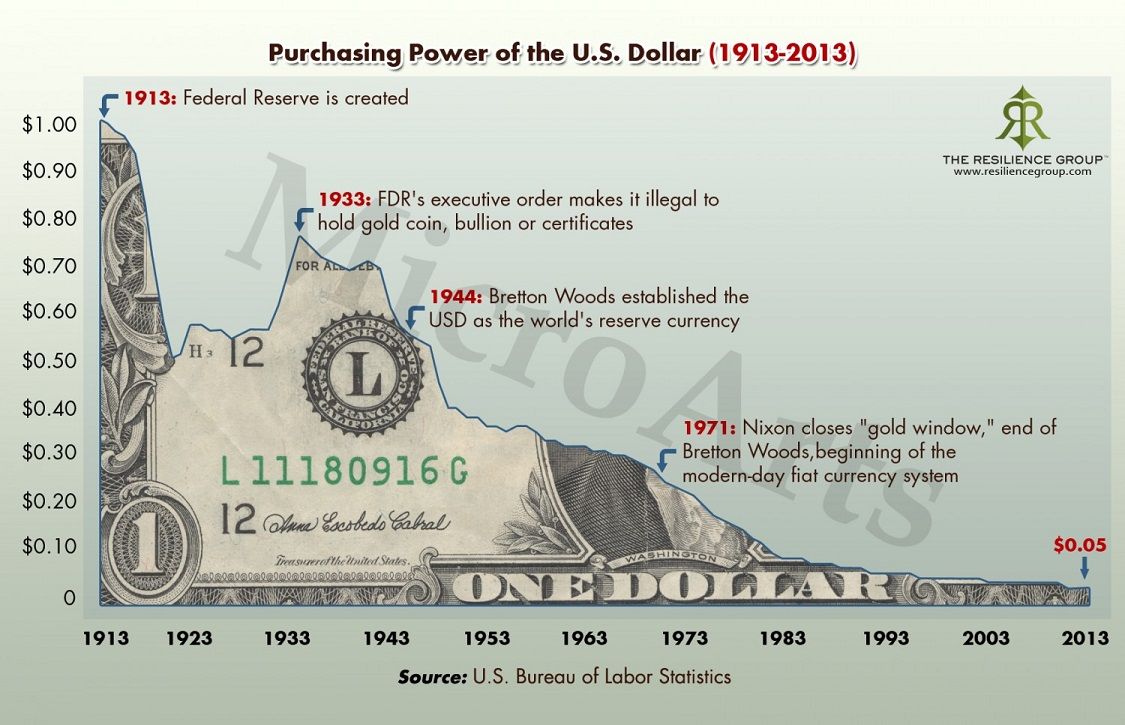 Governments hate the fiscal restraint of a gold-backed currency. It prevents them from entering countless foreign wars of conquest and impedes their ability to reward their supporters with handouts. Thus, Nixon finally severed any and all connections of the dollar to gold in 1971 and the U.S. debt has exploded since this key move: The financial crisis led to the largest taxpayer bailout in history, with the banks essentially being rewarded for the reckless behavior that caused a global financial crisis and decimated the financial futures of millions of working people. But they own and control the FED, so simply printed the money to cover the losses and keep their businesses afloat.

The result has been a near quadrupling of the U.S. national debt from around $500 million to almost $2 trillion today! It took nearly a century to rack up the first $500 million in debt and then just a few years for the next $500 million. This is a slippery slope and financial death spiral for the United States economic system. 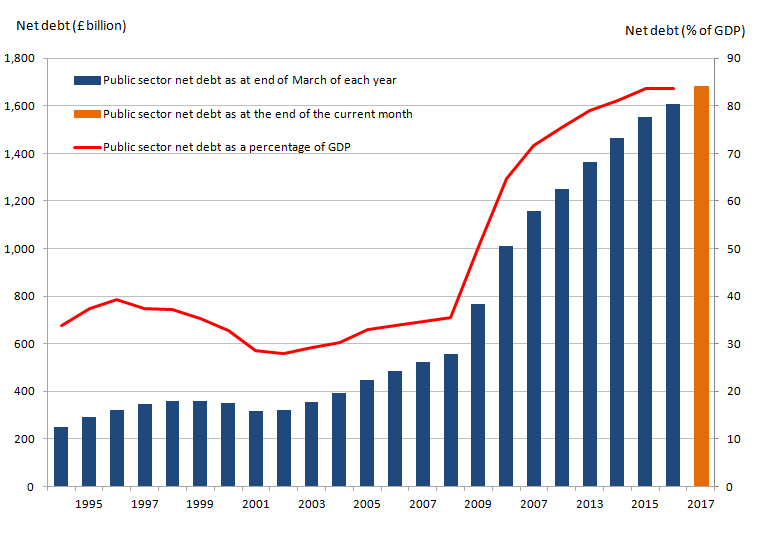 These same banks that fleeced the American public out of trillions of dollars and left the bill to future generations, have benefited immensely from the privilege of printing the world reserve currency / petro dollar. They give the money to their banking businesses at near zero percent interest and those banks then lend the funds to the public at anywhere from 4% to well over 20%. Its a good gig if you can get it and look yourself in the mirror each morning.

Anyone that has studied the origins of the banking system and understands the social cost, will surely desire an alternative. But the idea of replacing government money with a voluntary monetary system outside of their control had previously seemed impossible.

Until bitcoin was born.

Not only does bitcoin allow you to transact in a currency not controlled by the banking elite, but it offers something no fiat bankster money has every been able to provide, an appreciating asset. Families in Venezuela that have moved their money into bitcoin and other cryptocurrencies have not only secured their financial future, but literally saved the lives of their loved ones. Inflation in Venezuela rocketed to above 1,000% this year, with food shortages and riots. It is all too reminiscent of Zimbabwe in 2008, though not yet as severe. But some families have been able to thrive:

"Bitcoin is literally saving my family from hunger and giving them the financial freedom to emigrate in the near future — Thanks to the rising price of Bitcoin and its relative stability (compared to the Venezuelan economy) my family is part of a very small fortunate minority that can afford to help feed their community and also potentially emigrate to another country."

So, not only is owning bitcoin (and other cryptocurrencies) a way to remove participation in the corrupt banking system, but it is an important form of financial freedom and an ultimate form of life insurance. And if fills a gap left from owing precious metals alone... the ability to transfer wealth digitally around the globe, almost instantly and free of charge. While you may not be able to hold bitcoin in your hands like gold, it shares the quality of limited supply and requirement of significant work in order to obtain it.

Thus, I believe that holding both gold and bitcoin together is not only the moral path forward, but likely to generate the best investment returns for you going forward and empower you with the ability to participate in a technological revolution.

But let's get back to the cause of societal ills for a moment. I believe that our political system has failed us and that systemic change is required to address these issues. Governments are just the public arm of the banking cartel, providing the illusion of choice via voting to the debt slaves they created. Government officials are primarily good actors, believable liars, charming, good looking and affable puppets. Their pockets are continually greased to keep the bankers and corporate elite in power, with a growing piece of the financial and global resource pie. This concentration of wealth in the hands of a few is very bad for the economic system, the planet and humanity at large.

Bitcoin and gold are a big middle finger to the world's bloated, corrupt, fraudulent governments.

Using these forms of money together, the government can no longer track your savings, track your spending, monitor your assets or prevent you from transferring your wealth wherever you wish. Using any one of the multiple anonymous, privacy-focused cryptocurrencies, you can become a financial ninja and escape the prying eyes of big brother. 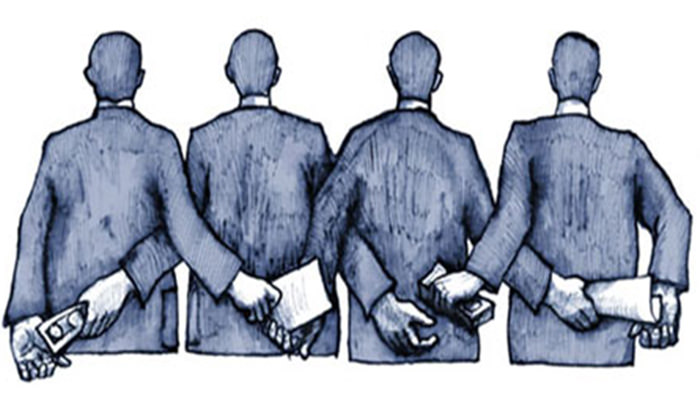 I submit that investing in bitcoin and transacting in cryptocurrencies makes the world a better place. It de-centralizes power and wealth, narrowing the gap between the rich and the poor, the powerful and those without a voice. It increases freedom in your life, including financial freedom and the ability to vote with your pocketbook.

Voluntarily adopted, competing currencies, has always been a pipe dream of those that advocate for increased personal freedoms and less government regulation. Suddenly, from the spark of an anonymous inventor named Satoshi Nakamoto, the dream is being realized.

But we aren't just talking about a new form of money. The greatest potential may come from the blockchain technology itself and the ability of the technology to significantly disrupt multi-billion dollar industries. In many cases, the blockchain enables businesses to operate more efficiently, at lower costs, with a better trust system and less potential for fraudulent activity.

As it moves into the entertainment industry, the actors, producers and everyone involved the actual content creation, will capture a greater share of the rewards. Consumers also benefit from lower prices, coupled with faster and higher quality services. Long and laborious processes can be automated and we usher in the obsolescence of the middle man.

Blockchain technology is bound to improve health care systems, reduce premiums, slash the time and cost of a real estate transaction, facilitate peer-to-peer lending, verify your identity or increase privacy, spur creative output and innovation, while shrinking the power and reach of governments and their banking masters. As a minimum, it is likely to increase your financial independence; at most it might save your life.

Cryptocurrencies offer a bloodless revolution that only requires that you remove your participation in corrupt systems. It is still a very small percentage of people that understand use cryptocurrencies, but as this number grows, so will the impact on the corrupt legacy systems of government and banking. Your choice to use cryptocurrencies is a decision to opt out of those systems and live in alignment with your moral code and world view.

Those that view cryptocurrencies as 'nerd money' or some get-rich-quick scheme are missing the point. It is undoubtedly creating massive wealth, but it holds the potential to do so much more. You can finally be the change that you wish to see and possibly leave the world a little better through the simple choice of using cryptocurrency. I hope you join the rEVOLution.

I just came across your fine article today. I couldn't agree more with you that there is a definite moral component to the kind of money that we use. I'm sorry I didn't find your article in time to up-vote it during the "payout window."

In any case, I hope that you will write some more articles along these lines. If I spot them in time, I'll support your work as well as I can...

Nice article, but I believe the moral obligation would to put the world currencies back on the gold and silver standard. Cryptocurrencies are no safer to price fluctuations than any other fiat currency. These last two months prove that point.

Gold and silver as backing to currency is the only way, because they are tangible. There is value in them, beyond just holding wealth.

For now, ride the cryptowave and see where it goes. Yes, it will help many, but I'm not sure if it will be the savior to societal ills.

Well the problem with the gold standard as of today would be that there simply isn't enough gold. You'd have a very deflationary environment. This is fine for cryptos as an isolated ecosystem. But it would likely be very bad for the world economy in it's current state. In a deflationary environment, incentives to spend are dampened (up to the point of being removed). Thus, spending decreases? Not bad you might say, but keep in mind this also means that corporations will not invest, or hire new workers, because sales plummet. Also, see here: https://en.wikipedia.org/wiki/Gold_standard#Disadvantages
In short: In a gold standard the rich become richer, while the poor (debtors) become poorer faster.

So, it encourages savings, like it did when putting away savings actually earned you money.

Plenty of gold in the asteroid belt.

I believe there is an untried system that is superior to a gold standard or to Bitcoin. Its a Rsource-Based Economy as proposed by Jacque Fresco of The Venus Project:
https://www.thevenusproject.com/tvphistoryevent/what-is-the-venus-project/

Solid post. I was about to start a similair discussion. Investing in cryptos is still a risky thing. I was researching a way to do better investment analysis on the current cryptos. Does anyone know about: https://www.coincheckup.com The best crypto analysis site by far. Complete in depth investment analysis.