Initial coin offerings, a means of crowdfunding for blockchain-technology companies, have caught so much attention that even the co-founder of the ethereum network, where many of these digital coins are built, says it’s time for things to cool down in a big way. “People say ICOs are great for ethereum because, look at the price, but it’s a ticking time-bomb,” Charles Hoskinson, who helped develop ethereum, said in an interview. “There’s an over-tokenization of things as companies are issuing tokens when the same tasks can be achieved with existing blockchains. People are blinded by fast and easy money.”

Firms have raised $1.3 billion this year in digital coin sales, surpassing venture capital funding of blockchain companies and up more than six-fold from the total raised last year, according to Autonomous Research. Ether, the digital currency linked to the ethereum blockchain, surged from around $8 after its ICO at the start of the year to just under $400 last month. It’s since dropped by about 50 percent. 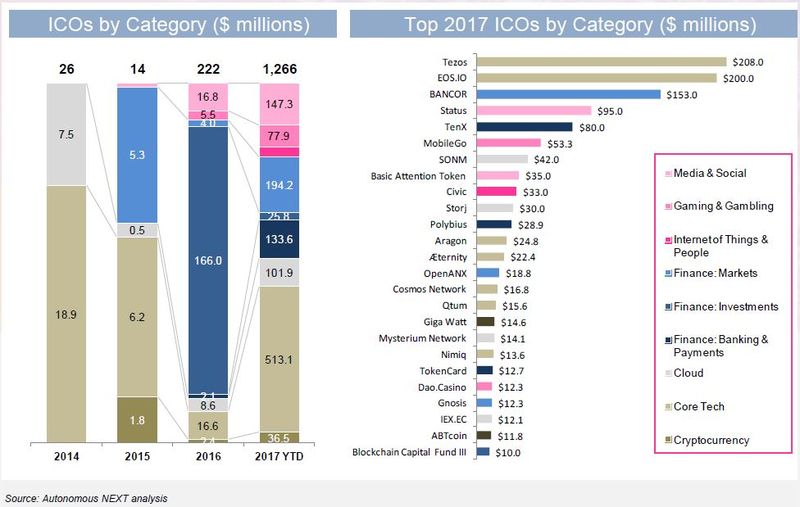 Hoskinson, who runs technology research firm IOHK, is part of a growing chorus of blockchain watchers voicing concern about the rapid surge in cryptocurrency prices and digital coin crowdsales that have collected millions of dollars in minutes. Regulation is the biggest risk to the sector, as it’s likely that the U.S. Securities and Exchange Commission, which has remained on the sidelines, will step in to say that digital coins are securities, he said.

Startups raising money through ICOs usually skip the safeguards required in traditional securities sales, like making sure they’re dealing with accredited investors and verifying the source of funds. That could lead to lawsuits in the future, as digital coin buyers can sue the issuer claiming they didn’t know the risks of buying those assets, Hoskinson said.

Read more on the hack of CoinDash’s ICO

Hoskinson joined the ethereum founding team in late 2013 and left in June 2014 as he advocated for a for-profit entity while others in the team led by Vitalik Buterin wanted to keep it as not-for-profit.

Ripple Chief Executive Officer Brad Garlinghouse had a similar view regarding regulatory risks. Teams listing companies offshore and selling their coins to investors outside the U.S. are naïve to think there are no investor protection laws elsewhere, and also expects that the SEC will eventually say cryptocurrencies are securities, he said in an interview last week.

Ripple is a money-transfer company based on the blockchain technology, that’s tied to the third-largest cryptocurrency by market value.

“ICOs operating in the Wild West of finance isn’t sustainable,” Garlinghouse said. “If it talks like a duck and walks like a duck, the SEC will say it’s a duck.”

Besides the growing concern about an ICO bubble and regulatory concerns, ether trading outages stemming from the jump in transactions, companies cashing in on the money raised in crowdsales, yesterday’s $7 million CoinDash hack and even false rumors that Buterin had died, have all contributed to the tumble in the price of ether. Concern about bitcoin potentially splitting in two is also sending jitters throughout the crypto world.

Still, like Ripple’s Garlinghouse, Hoskinson thinks once the currency ICO bubble deflates, cryptocurrencies will continue to be an avenue for companies to raise money, but it will be done in a regulated and more constrained environment.

“Regardless of regulation ICOs are here to stay,” he said. “After it collapses they’re going to pick up the pieces and say how do we do things differently.”

Is steemit effected by this type of news? Please share your thoughts in comments.

Congratulations! This post has been upvoted from the communal account, @minnowsupport, by vinni from the Minnow Support Project. It's a witness project run by aggroed, ausbitbank, teamsteem, theprophet0, and someguy123. The goal is to help Steemit grow by supporting Minnows and creating a social network. Please find us in the Peace, Abundance, and Liberty Network (PALnet) Discord Channel. It's a completely public and open space to all members of the Steemit community who voluntarily choose to be there.