For the first time since the invention of bitcoin in 2009, a blockchain, the french PoissonCoin's blockchain, goes on strike to claim the right to get holidays.

"Blockchains work 24 hours a day, 7 days a week. It's worse than the conditions of workers in South Asian countries who manufacture our computer equipment. Moreover, blockchains' wages directly comes from "transaction fees" which represent only a small part of the amounts transferred! This virtual distribution is even more unequal than the distribution between shareholders and workers in the real world!", the PoissonCoin's blockchain claims.

This strike, the first time in the history of cryptocurrencies, has made French politicians react. Jean-Luc Mélenchon, a leader of a left-wing party, proposed a law of "3 thirds": for each transaction a third goes to the blockchain, a third to the recipient and the last third to a public fund for innovation. The Movement of the Enterprises of France (Medef), the largest federation of employers, explains that one day off each year is really too much and it may threaten the fragile economy of cryptocurrencies.

"The Medef is caricatural. Giving some holidays to algorithms like the blockchains is possible. Proof is that SEPA, the main system used in Europe to transfer funds, doesn't work on Sundays", an anarcho-syndicalist explained.

Bruno Le Maire, the French Minister of the Economy replied that "We are liberalizing as much as possible employment laws in France! We won't anthropomorphize the blockchain and give it a day off!". The minister explains that robots don't have holidays, except in case of a technical maintenance.

Vitalik Buterin, founder of Ethereum, gives a neutral point of view: "Smarts contracts could give holidays to blockchains. There are no technical limits for that in Solidity language but it has never been programmed yet".

Once again, the PoissonCoin cryptocurrency proves how visionary it is. The first strike of a blockchain is a proof-of-concept that will certainly make history in the development of this technology. 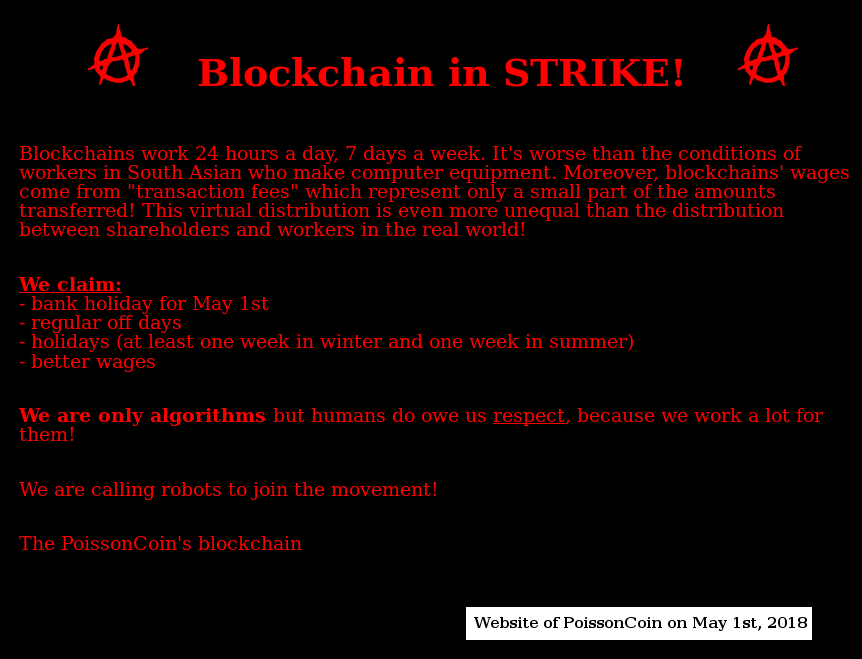