For those completely unfamiliar with Norse mythology, the ragnarök represents the war of gods and the end of the world we know. To paraphrase, the ragnarök of the crypto world should bring the apocalypse of the present system and the rise of a new and hopefully better world order. 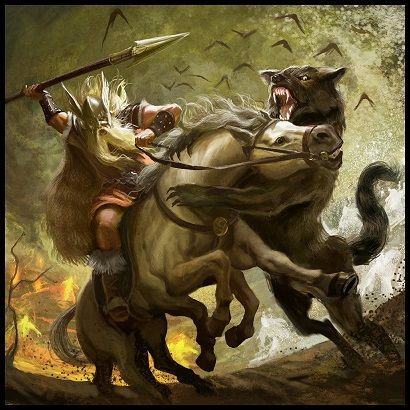 I believe the winter is coming in the cryptosphere (not necessarily correlated to a market bubble). It is inevitable and the beginning may already be here. The first battle to come is the one with the authorities - a good and most recent example being the AriseBank. Authorities are afraid of the freedom that blockchain provides (or may/will provide) for the people.
The banksters and governments around the world are well aware of the loss of power (and money, which is basically the same - unfortunately, but it reflects the state of (human) collective conscience). I firmly believe the blockchain technology can bring the mankind to a higher level of consciousness. I think the technology is definitely here to stay and will be widely implemented in a wide range of applications. Another question is, whether we as community will manage to prosper (absolutely not only from a financial point of view) with the technology.

The other battle (metaphorically speaking, again) is also inevitable and will be a consequence of human greed combined with fear. Every market in the history once crushed and I am quite positive this one will, too. A crush will (most) probably result in a collapse of a large portion of currently present cryptocurrencies (projects). Only a minority of the most promising, widely recognized and adopted projects will survive and continue to thrive in the decades to come. Of course there is also a possibility these two battles will coincide. It would only mean that the effect of catharsis could be of much greater magnitude.

I hope you enjoyed the reading, your opinion on the subject would be highly appreciated. I wish you all the best in the battles to come :)