The World of Cryptocurrency - Crypto Market on Red

Recently, some altcoins showing profitable trades while bitcoin still struggling for a month now. As I opened the coinmarketcap, it's a total bloodbath in the cryptoworld - it's almost 98% that were in red, it's like a hailstorm that was dropping from the sky. Cryptonians was used to this roller coaster ride and still hopeful for the coin's recovery. We see it in a positive way - Its high time to buy coins now while they are crashing and wait for it to rise again for us to sell it. 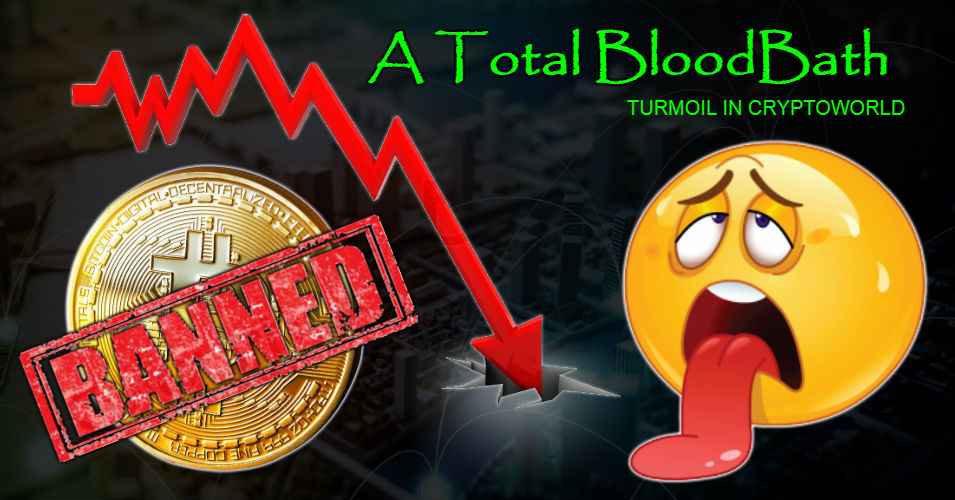 Some news that was circulating on the web that happened in South Korea that the government were doing what China did last year - they're trying to ban cryptocurrency trading and things like that and basically coinmarketcap removed all the south Korean exchanges from the market which dropped Ripple's market cap alone by 20 billion and a lot of other coins market caps as well. That caused a lot of FUD in the market and a lot of people were panicked selling and these resulted in a total bloodbath in the coinmarketcap. But as of now nothing is finalized upon this news, so I'll be looking to see South Korea to put in some regulations of this virtual coins and things will go on as usual - the same thing happened with China last year that they banned also the exchanges. South Korean crypto investors were in great turmoil but I am certain that these will not hinder our fellow cryptonians to stop engaging in cryptocurrency. Let's just hope that everything will be fine in the next few days.

Guys, go invest in EOS asap!
I can see a real bright future for this coin.💰

i think i will consider this EOS, ill will bet just a few cents on this too :)

I bought some back in the $1 range, not as much as I should have, but that's what I've said about every coin I've ever bought :) Anyway, EOS is (in my opinion) a great coin. Their team is amazing, and they just recently started marketing, which is crazy to think about, considering the price went up so quickly without them doing much marketing at all. But, I definitely agree. This is a great coin to invest in.

Top Cryptocurrencies Pending Price Target and their due dates People need to start sharing these posts rather than daily snap shots.. Market Correction is normal

were on track now, everything is green, lol

The loss of confidence in Bitcoin by its current investors makes the crypto space seem even more scarier to those who have wanted to invest. We should not be selling but buying people. We must have faith in this new technology of currency. Don't panic. The market will climb again. Patience is now key. Let's remove ourselves from the crypto space for a while. Spend sometime with love ones or read a book that you've been putting off reading. Stay Calm guys. We will win in the end.

Patience is necessary for any investment. When you first invest in something you have to do all the math. But once you are confident and invested, you should stay invested even if the market fluctuates. For long term investors it is the right time to buy more and accumulate. If you have money invest on some of the emerging cryptocurrencies.

agree with yah. we really need patience in this kind of business but also we need to learn to prevent losses along the way

The government is making many confusions about cryptocurrency in the world market.

they simply dont like crypto since they were not earning from it.

I agree! The ups and the downs are what make this market healthy. If the market only ever went up, that would certainly be great. But, the market can't ever establish loyalty if it only ever went up. Without loyalty, the market just needs a bit of FUD, or a small dip, and everyone would exit. With these "crashes", we can allow those who don't want to be in the market to exit, and we can allow those who believe in this market to enter, thus strengthening the market. (Note: this is one benefit seen during ups and downs, not all.)

This kind of business is like riding on a rollercoaster, we should know how to play the game otherwise you will go bankrupt, lol

I completely agree. I get bummed seeing and hearing about so many individuals losing money in this "game." If nothing else, I just want people to invest a little bit of money they can afford losing, and then not look at it again for the next year. lol.

thank you @elizahfhaye for the post. With regards to what is happening in South Korea is either total lack of govt. policy or coordination, or they are sending out trial balloons to gauge reactions. I think they have just been caught off guard on how quickly it has developed and spread.

but there are news that were surfacing now that it is not true south korean govt banned crypto, its just a propaganda. There were confusions in the web, lol

I really love the way this community owns this system and they care for steem.I haven't seen this kind of enthusiasm anywhere else where everyone relies on the devs.
Good work, yeah this year belongs to steem.

steem may be one of the top 10 in the coinmarket cap someday since their platform is very unique and a social-media type entity ;)

indeed it's a bad time of cryptocurrency. But i am damn sure it will rise again with more strength. nice sharing @elizahfhaye

yup, that certain that it will rise again :)

Nice post.
The only thing that matters most if you are a cryptocurrency holder, and that is patience. Prices will shoot in coming days. It's the right time to get cryptos.

yup, its hightime to invest in altcoin to earn huge later on

Thank you very much for giving new and analytical information about cryptocurrency.

thanks for the reply.

Everybody were panicked recently, lol

Indeed, as Warren Buffet said "The stock market is a device for transferring money from the impatient to the patient". Same for the crypto market, buy after a crash and HODL what you already have through future crashes!

Wow! Great way to put it!

Buy & HODL.. We been seeing the red seas at times every month, just an excellent opportunity to buy and has not lasted more than 24-72 hrs. If you are selling anything in the red you really need to stop and think. Don't be scared guys!

Much thanks for giving new and explanatory data about digital currency.
Upvoted and resteemed

Was a hard battle today, but it's going to go up soon!

It is important to pay attention to the Far East! And the central banks - mimick there investments to optimize profit . . .

Bought some coins last night, I should have waited for this morning. Those who are new buy now! Those who have invested already, you should way for a little more of a dip. The dip can also be caused to the January effect which is in stock markets. It might play into the crypto currency market. But that's just my opinion. What do you guys think?

cryptocurrencies are here to stay. and they will serve as instruments to transport money affordably and easily across national boarders.

charges of banks are ridiculous and anything that topples them makes my day.

I'm holding on to mine, I'm new to crypto but its basic economics to know how demand and supply affect these things. Prices will go up again

very nice post and good information for us, but patience.

Am really out of suggestions because the way crypto currencies is going we dont really know a decision to make because as for me am dealing on bitcoin and the crypto hammer has really been hitting hard on bitcoin so far with recent drops in value but every crypto currencies investors are always optimistic and sure am in the same category with you, there will be a bounce back.. thanks for this great info shared.

It's understandable to be a little concerned. But I think the whole idea of these attacks and government shut downs is to put us all that believe in crypto, in fear and lose faith and confidence. Don't panic things will get better. We should all stick together in the crypto community. Otherwise the would have conquered us yet again.

Cryptocurrency is a huge one for Bangladesh. Most of the government is not approved. @elizahfhaye

I can see a genuine brilliant future for this coin.

The primary concern that issues most in case you are a computerized cash holder, and that is resilience. Expenses will shoot in coming days. It's the helpful time to get cryptos.

They say that you should never try to catch a falling knife.

Some regulation may turn out to be a good thing.

It's time to buy! We all were fortunate enough to live in the era of the change of fiat for technology and a happy future.

These weekly mini heart attacks due to crpto fud is creepling, am gona be blind to it all.

This correction is really ugly !

i think ethereum will break the record of bitcoin <3 i love crypto <3 crypto will be future man <3 thanku for sharing this amazing :) keep in touch

i put my trust in ethos

essential and analysis information about crypto.
thanks for sharing.

Total marketcap below 500b now. Bleeding... In other words.... good time to shop now :D

I can see a genuine splendid future for this coin.
Resteemed & upvoted done.

Mega Banks and the media will try to shake you out of the market because they are scared. Im buying.

they are just ignorant about the future of money. fiat spreads germs.

I fell for it with China FUD last year. Not today Satan not today... Hold strong!