There's been some buzz about EOS this last week, for good reason. @dan's latest project may indeed be positioned to make quite the impact in the blockchain space. But that's not the topic for this post.

Rather, this is focused around a question that's been raised by some:

if EOS takes off and makes waves, what will the potential consequences be for Bitshares and Steemit?

Granted, one might expect that the exposure alone might bring more users to Bitshares and - especially - Steemit. Surely, people who've never heard of these blockchains of Dan before might suddenly be interested if EOS goes big.

And of course, it might be be expected that being EOS coming as an evolution of Bitshares and Steemit, there could indeed be a synergy that would leverage the ecosystems having been built so far.

Though, this post is really all about bringing awareness to one point... I discovered an interesting, important fact yesterday after reading @kevinwong's post and seeing this: 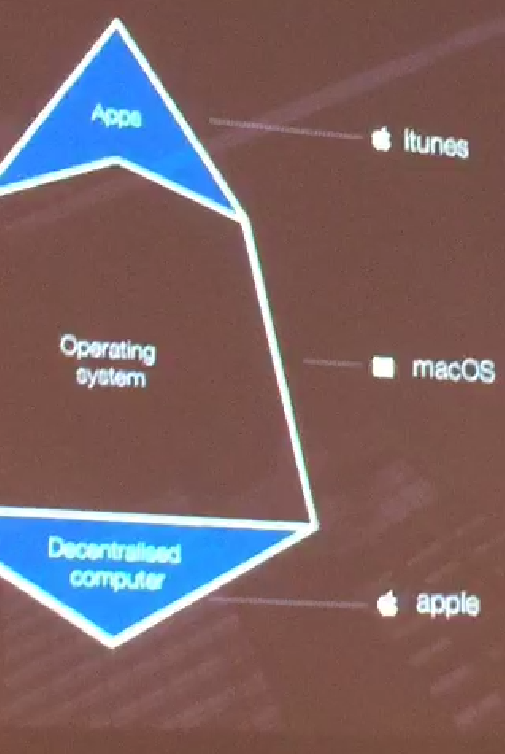 While there were some big "ah-ha's" that resulted from that one diagram alone - a single image speaking perhaps much more powerfully than elaborate descriptions - although @kevinwong also did a great job drawing out his understanding into words with his post, EOS: A Blockchain Operating System - my discovery came upon going back to watch Dan's presentation of EOS at Consensus 2017...

Shortly into it, he presented another diagram that spoke quite loudly for itself, accompanied by the words: Bitshares and Steem are handling about 2/3 of all transactions in the blockchain ecosystem.

(NOTE: I am not stating this as a concrete FACT, and have no fucking clue how to actually confirm this - but am relying what was shown/told in Dan's presentation. If anyone can refute or verify this, please feel free to do so in the comments below.)

Bitshares and Steem are significantly outperforming both Bitcoin and Ethereum in regards to number of transaction. I'm not totally sure if that has changed over this last week as BTC and ETH have been skyrocketing in value - though at least, this is the figure given in the EOS presentation three days ago.

Another piece of info to consider in context:

BitShares on Twitter: The Bitshares blockchain did 580k transactions yesterday. This is more than Bitcoin has ever managed in a single day Again... two weeks ago, Bitshares had more transactions in a single day than Bitcoin ever had.

Meanwhile, shit coins with no practical lasting value are getting pumped and dumped for way more, while Bitshares and Steem have been taking their time to grow a strong set of fundamentals.

And, their performance speaks for itself.

While the debate rages on about Bitcoin's ability to keep up with its growing popularity, transaction fees have skyrocketed this last week through its price hike, and transactions have been backed up - Bitshares has already outperformed it, and hasn't even yet come close to its full capacity.

Well, apparently, there are some big things in development for it. And, the userbase is steadily growing. It's nearly through its first year of operation, carrying on strong and steady, having made it through several learning cycles, improving consistently. More and more people are coming into the cryptosphere. There really are no competitors for Steem - Akasha, Synereo, and Yours working on prototypes that can't even come close to what Steem has already proven. You do the math. Of course, we're still in the wild wild west of the blockchain revolution, and anything can happen from here - including everything blowing up in our faces and going to zero.

But spare the apocalyptic scenarios, crypto is only in its relative beginnings.

And Bitshares and Steem have some fairly significant fundamentals in place, with performance results that speak for themselves.

Note: THIS IS NOT INVESTMENT ADVICE.

Do your own homework.

Though, if you're looking at the same data as I have, it's safe to say that anyone holding Bitshares and Steem may be in for a sweet, sweet ride... :-) Go steem. And go bitshares. And come already EOS! I agree. Steem and bitshares do a big part of actually adding value to the block chain. Without just perception. They add value you can see! Like your post! Thanks for sharing! Great news!

The transaction speed of bitshares and steem is impressive, but they exist in a much more centralized manner than most other crytpo in order to achieve those kind of stats. Pros and Cons, they both have their place.

steem and bitshares are NOT centralized...rather the reverse. The blockchain (which they both run on) is a widely distributed (global) MASSIVELY redundant, HIGHLY parallel system.

think of it this way...most of the other crypto's operate in series.
Steem is MASSIVELY parallel..

in comparison to ethereum or bitcoin, steem has a more centralized server and governance network. It's democratic, and it is distributed, but it's definitely more centralized.

most of the actual services and businesses built within the Bitcoin ecosystem are centralized. They are run by specific people, in specific locations, with specific computer systems, and they are susceptible to specific legal entanglements.

This situation creates tension and certainly a little irony—we have a decentralized technology, yet most things existing upon it are centralized

Ethereum
Mining: less centralized then Bitcoin because the Ethereum Proof-of-Work does not incentivize special purpose hardware other than GPU.
ethereum/wiki
Anouncement to move to Casper Proof of Stake system in a year, it has been argued that the PoS algo is rather decentralized.
Introducing Casper "the Friendly Ghost" - Ethereum Blog

Organisation
The Ethereum Foundation has the mission to steer development of the Ethereum Protocol. This is a centralized organisation with no consensus driven decision mechanism.
Announcing the New Foundation Board and Executive Director - Ethereum Blog
The central figure is of course Vitalik Buterin. His decisions will informally have great influence on the direction of Eth.

TL;DR: on organisational level not (yet) very decentralized, on technical level it is.

Take a look at this article

A hard fork happens when 67% of the top witnesses are all running a certain version of STEEM, which means the top 19 witnesses can pick and choose whether to agree with a fork or not. (e.g. Hard Fork 13 and 14 were both postponed for a week, and re-designed because witnesses refused to update)

A hard fork can happen with just 13 witnesses voting. Just 13 machines. The type of consensus needed to make changes on the networks is on a scale that doesn't even compare to bitcoin or ethereum.

That is mainly what i mean when I say "more centralized". As a network it is much easier to attack as far as protocol changes, or reversals in the block chain.

Not saying that it isn't a secure enough system, but their goals as networks are much different as well.

consider Steemit and BitShares to be apps.
EOS will be the operating system.

Just two apps... to my understanding, it'll also allow interoperability between blockchains - Steem and Bitshares probably being the first two obvious choices - though if EOS provides a strong enough value proposition for its adoption with Ethereum developers... game over / game on.

is Busy and app? how about CChain?