"Gods give me strength" - Poydras Paruk shouted violently.
This giant of a man was a sight to behold. On his face, warpaint gave way to the combination of mud and blood, and his pale blue eyes were more transparent than ice. With his obsidian black battleaxe tightly held in his enormous hand, he stood tall above all others. This soldier of queen Reyna inspired terror in the hearts of anyone foolish enough or just unlucky to get in his path.

This battle was no different than any other. His 4th legion was sent to pacify some conquered nation's rebellion. Heritage of these people, their agenda even their numbers didn't matter much to Poydras. They were just an obstacle to his final goal. When he was first enlisted, he felt some form of empathy for the conquered tribes and nations but soon he discovered that empathy was an inconvenience that dulled his resolve. And nothing, absolutely nothing can get in his way. 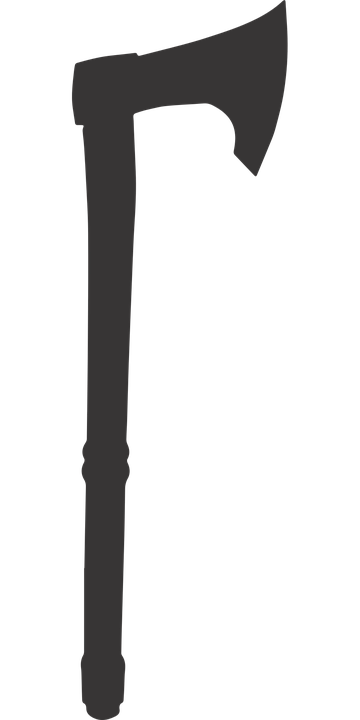 With the rest of the legion behind his back, Poydras charged at the loose ranks of these rebellious peasants. Poor fellows. It resembled more of a fight between kittens and a full-grown lion than a battle to a death between grown men. As Poydras charged at them their hands trembled, his did not. With his long arms, Poydras's reach was far greater than that of his opponents and he used this advantage quite well. The first rebel that was right in front of the giant got beheaded from a single swing. Rebel's body was still standing, loosely holding a short sword while his head was rolling down a gentle slope back among the rebel ranks. Poydras continued charging until there was no more space to run. At that moment he was surrounded by enemies from all sides. With his legion few dozen meters behind he was all alone. Just how he preferred.

Everyone was still impressed by his size and razor sharp black axe to make the first move. Always the same story. Noone wants to make a strike against him, fearing for their lives. Unfortunately for them, Poydras didn't have a habit of stopping. He continued slashing and turning, stepping and sliding. Rebels were privileged to see the famous "black dance of death" from the first row no matter how brief they could have enjoyed the show.

The battle didn't last long. The famous 4th legion with their champion taking the lead was relentless. In the aftermath of the battle, victors were plundering and feasting. Poydras didn't join in with the rest. His prize cannot be stripped from a corpse or found at the bottom of the bottle. What he seeks, can only be given to him by the warrior queen herself. Poydras was impatient. He didn't even stop to wash his face or hands. He walked straight towards the commander's tent. Two guards stationed at the entrance felt very uncomfortable as he approached. They should have probably stopped him, but Poydras seemed like he was still in a blood frenzy. So they squirmed a bit in their posts cursing their unlucky shifts. As he entered the tent Poydras changed instantly. His killer disguise fell down as soon as he laid his eyes on the Legion commander. From the Lord of death, he was transformed into a worried 45-year-old whose fate depended solely on a whim of a man in front of him. In this tent, Poydras was the kitten

"Sir, I didn't want to disturb you but I presume you know why am I here." - Poydras tried to void it, but in the end, it sounded as he was grovelling at the commander Nedor's feet.

"Of course I know, soldier. After all, you are my most prized soldier. What kind of a commander am I, if I don't know my favourite soldier's needs?"

Trap lied somewhere in those sentences, Poydras was sure of it. As he was trying to figure out what line held the trap commander continued on -
"You could have answered that a bit quicker, soldier. Never mind. This piece of paper in front me is the Liberation form signed by Her Majesty herself. As you know, for it to be valid I need to sign it also. Before I do. I want to have a chat with you."

Poydras was in no mood for chatting. He just wanted his damn papers so he could leave this awful life
behind him, forever. But he didn't want to anger the man in the control so he tried to be as calm as possible - "Yes sir. What do you want to chat about?"

"I know Poydras that you are here with us today, not because you are a loyal subject like myself, but because you have been enslaved 20 years ago. To be honest, I never had a problem with that. I value performance, not the reasons behind it. So before I sign the Liberation form, I have a proposition for you. Stay here with us, with the 4th legion and I will make you into my deputy. You could train an entire legion of killers like yourself. In return, I offer you an abundance of gold and women. More than enough to forget that wife of yours. Besides, you haven't seen her in 20 years, who knows how she looks now, or what even happened to her."

Poydras lowered his gaze and remained silent for a minute.

"It is not polite to keep me waiting, soldier." - Nedor commented nervously.

Commander smiled and signed the papers. As he was about to give the Liberation form to his new deputy he saw a black flash. And that was the last thing he ever saw. It was quick and quiet. Poydras picked up the paper and cleaned his obsidian axe with the commander's purple cape.

He thought wrong. Every night for the last 20 years Poydras has dreamt exactly the same dream in which he is running from an angry mob. Faces in the mob were the faces of men and women he killed serving the empire he hated. And he was running towards her. His beloved Lile. She stood as beautiful as ever near the creek that was flowing next to their house. Her hands are on her belly, instinctively protecting the unborn.
And with each day that passed, Poydras managed to make one step more towards her before he eventually woke up.

Poydras again pulled on his killer's disguise and left the legion's camp with a piece of papir firmly held in his left hand.

Poydras was looking at creek from his dreams, from his past. Beautiful young girl was weaving a basket right next to the creek. As she spotted the giant, she got scared and loudly called out for her mother. Her mother rushed out and then he saw her. The love of his life. His Lile.
In Poydras' mind doubts arose. Can a killer with 20 years of experience transform back into a man worthy of her?

"Gods give me strength"

This is my entry for #constrainedwriting contest hosted by @svashta

you certainly can spin a story what a great read

It might be a bit colder than usual in my room, but your story definitely gave me the chills.

Very well done! This was an amazing read! :D