Ran from June 1-2, 2001 this military wargame exercise included involvement from such agencies as FEMA, the FAA, and the FBI and had a strong Osama Bin Laden theme (and he is even depicted on the cover of the exercise document). In the drill Raytheon MQM-107 Streaker (unmanned) drone aircraft are used as weapons after terrorists acquire weapons such as cruise missiles and/or drones aircraft and strike a variety of targets (including skyscrapers) over a period of several hours using multiple coordinated and varied attacks on different targets along the East Coast of the United States. 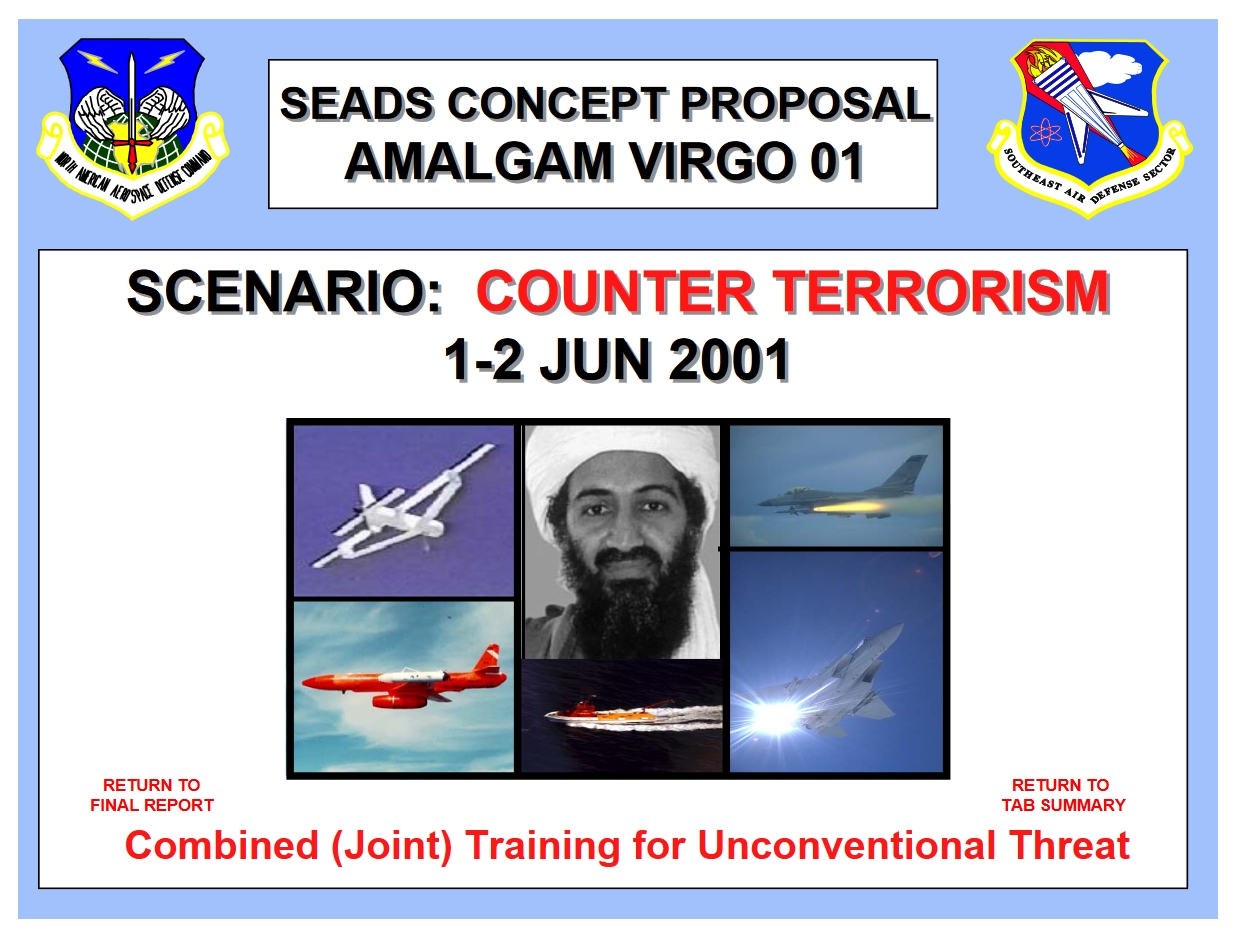 As part of the AV01 exercise, drone aircraft are used as weapons against a skyscraper on the East Coast (Panama City, Florida). In the drill a C-130 electronic communication aircraft was used for controlling the drone remotely and the drone signals were relayed through ground channels. This exercise also drilled a simulated terrorist hijacking of a commercial airliner and suicide attacks using planes, but this was a background script as the hijacking element was mainly to be tested using part 2 of the drill (Amalgam Virgo 02) which was scheduled to take place later in 2001. For the simulated hijacking aspect however they specifically drilled a flight path & target using a transcontinental flight across the United States to target Washington D.C. from the East (like on 9/11). To truly test defensive capabilities the simulation was acted out using confusing flight patterns (like on 9/11). The AV01 drill simulations also were ran multiple times with different defensive options activated and deactivated to test for strengths and weaknesses in defenses (and the ones that were strong were altered in the aftermath of the exercise to allow the 9/11 attacks to happen with much more certainty). 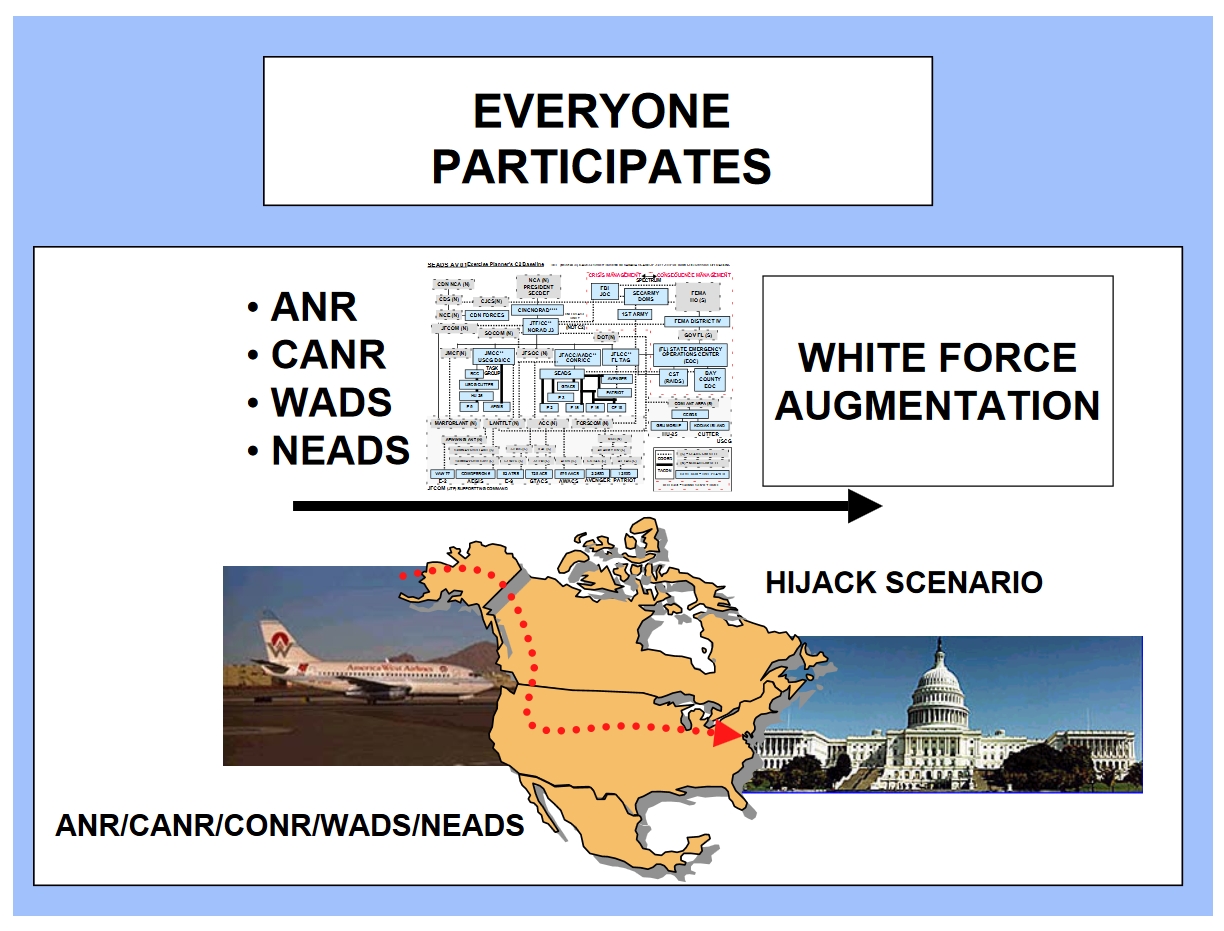 Sidenote: Amalgam Virgo 01 appears to be the dry-run for the operation which was ran just prior to the 9/11 attack. Shortly after this AV-01 drill was ran, the shootdown orders were taken away from dozens of high ranking military officers and instead were left in the hands of only a small group of only 4 people (including Bush, Chaney and Rumsfeld which were basically the 3 stooges on 9/11 avoiding any possibility of an "official shootdown order" prior to the end of the black operation).

Amalgam Virgo 02 was to be part 2 of the Amalgam Virgo exercise series, and was scheduled to take place starting in late 2001. Similar to the Amalgam Virgo 01 exercise, this drill (AV-02) was to exercise multiple drone/missile/hijacking terrorist threat scenarios, but was to be more focused on the hijacking element this time (as AV01 was primarily drone/missile focused, while AV02 was primarily commercial hijacking focused). The primary element to be exercised in the first scenario of AV02 was a scenario involving a near simultaneous hijacking of multiple live-fly commercial aircraft which were to be used in terrorist suicide attack scenarios against multiple major monuments, infrastructure, and government buildings inside the United States. The first Amalgam Virgo 02 scenario (of over 40) of the exercise series was titled Red Spins (referring to a simulated dynamic aerial terrorist attack scenario (spins) which was to be done by the red team of NORAD (red team/attackers/US NORAD) which was to be used to test regional aerial defense capabilities which were to be defended by the blue team of NORAD (blue team/defenders/CAD NORAD). To this day the Amalgam Virgo 02-1 Red Spins document is coincidentally enough deemed classified for national security and "oddly" enough even directly states "9/11 Classified Information" over almost the entire official AV02-1 Red Spins document. 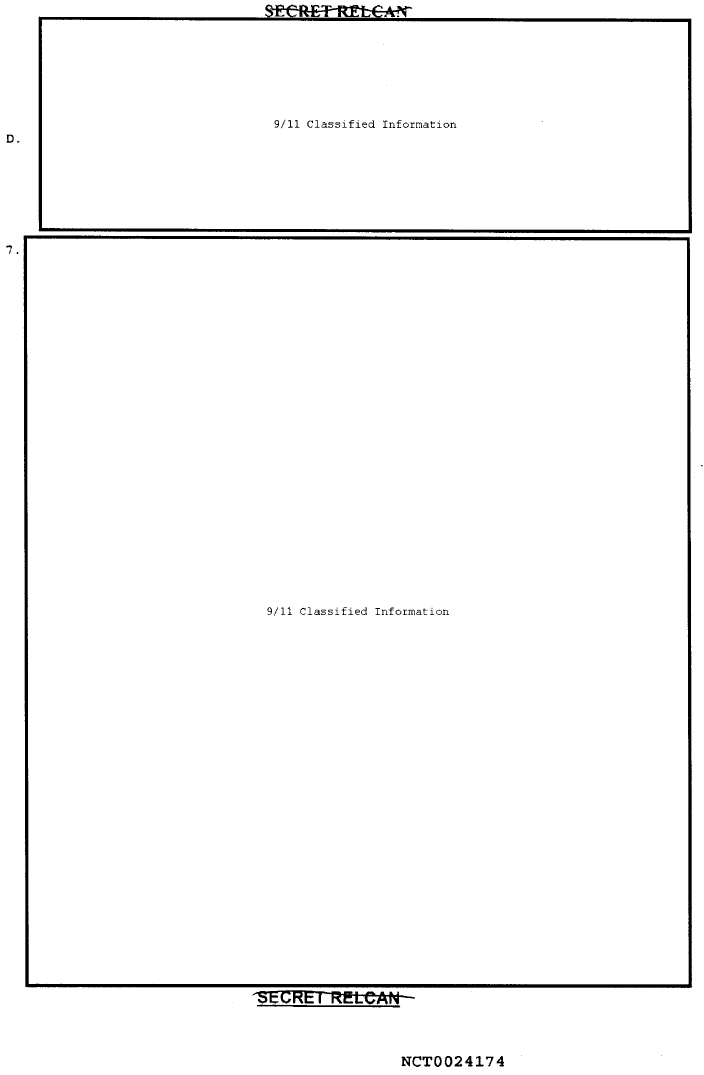 Sidenote: 227 Amalgam Virgo 02 documents were released via a FOIA request a few years ago, and of the 227 Av02 documents, scenario #1 titled Red Spins is the only one that remained classified upon release (go figure...). As I stated previously in other posts, I will be trying to do at least 1 post a day on this important topic (9/11) as we lead up to its anniversary to help spread awareness about the countless oddities, inconsistencies, coincidences, and outright lies that are associated with the events of that tragic day.