[COMIC BOOK REVIEW] The Joker: Death Of The Family 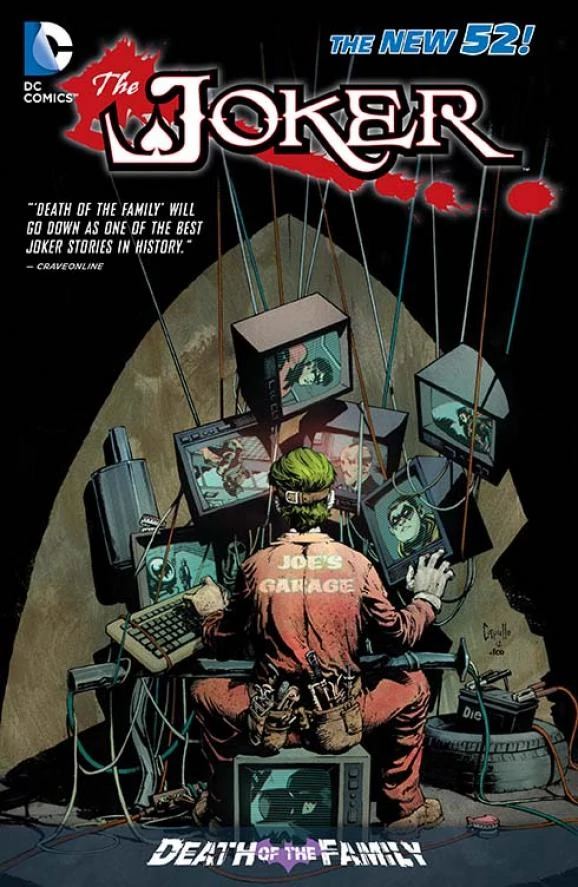 In this story, Gotham's heroes all exist in a world where they thought that the Joker was gone. Disappeared or dead, they weren't sure where the hell he was. And just when they least expect it, he visits them all, one by one. While he was away, The Joker had come up with a theory on why Batman had become a little soft over the years and wasn't much of an opponent, insinuated by Joker from his theory alone. And he believes the reason for this is because of all of Batman's associates who assist him damn near everything he does these days. Maybe he's right. Maybe Batman does have the opportunity to hold back a bit because of the help he receives from his side-kicks. It's not like he's single handedly taking care of every villain in the entire city now-a-days. Right? It's not that hard to believe that the Joker may be right. Especially with his odd obsession to have this back and forth game with Batman.

When the Joker returns he comes back with some sort of gas that turns whoever inhales it into crazed clown zombie like monsters. They grow a forced sinister smile, they're skin whitens up like the Joker's and they try to destroy anyone around them. He not only sets this gas on most of the homeless and Joker inspired gangs throughout Gotham, he eventually uses it on some of the heroes as well. Batman doesn't exactly come out to play a while lot in this story. It's not until the Joker can defeat and kidnap everyone that the Batman shows his face. Heads up, there is definitely a lot that you need to know before you give this issue a read. I myself have been trying to read everything from the beginning, and there were some things and some characters that I'm not quite familiar with myself yet. But that doesn't make it hard to understand, or any less enjoyable. Out of all of the villians in Gotham City, The Joker is hands down, my favorite. As I imagine he is for most people. This issues version of him, might be the most psychotic version I've seen yet. Undoubtedly. In the events before this issue, Joker's skin was taken from off of his face and left behind before he disappeared. Which is one reason some thought he has died. But, he returns, with the skin from his face, tied back to his head with a belt and some strings, which is a terrifying image, for anyone going head to head with this psycho. The Joker has an incredible tolerance for pain. And in this issue, that shows. 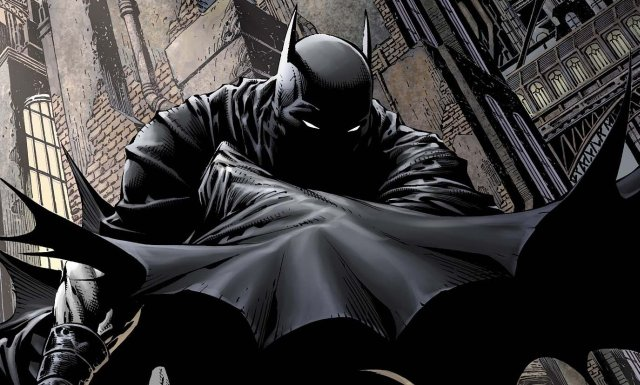 At the beginning of this issue, we see Batman going around Gotham throwing down with Joker inspired gangs full of psychopathic murderous men dressed in clown attire. While the Joker may be away, a town full of inspired psychopaths still roam the streets, murdering people and causing chaos throughout the city. When he finds out who is setting these psychopaths on the city and send him straight to Arkham Asylum, which takes his attention away from Joker's return. The Joker seems to play on confusion with Catwoman. Tricking her into saving a child with a bomb attached to it. Threatening to blow the bomb if she doesn't come with him, she's forced to follow him to the Elliot Beach Amusement Park. While there, he nearly paralyzes her for moments with a "rigor mortis paint" on the inside of her suit. Which renders her useless to lay there and listen to everything the Joker has to say to her. 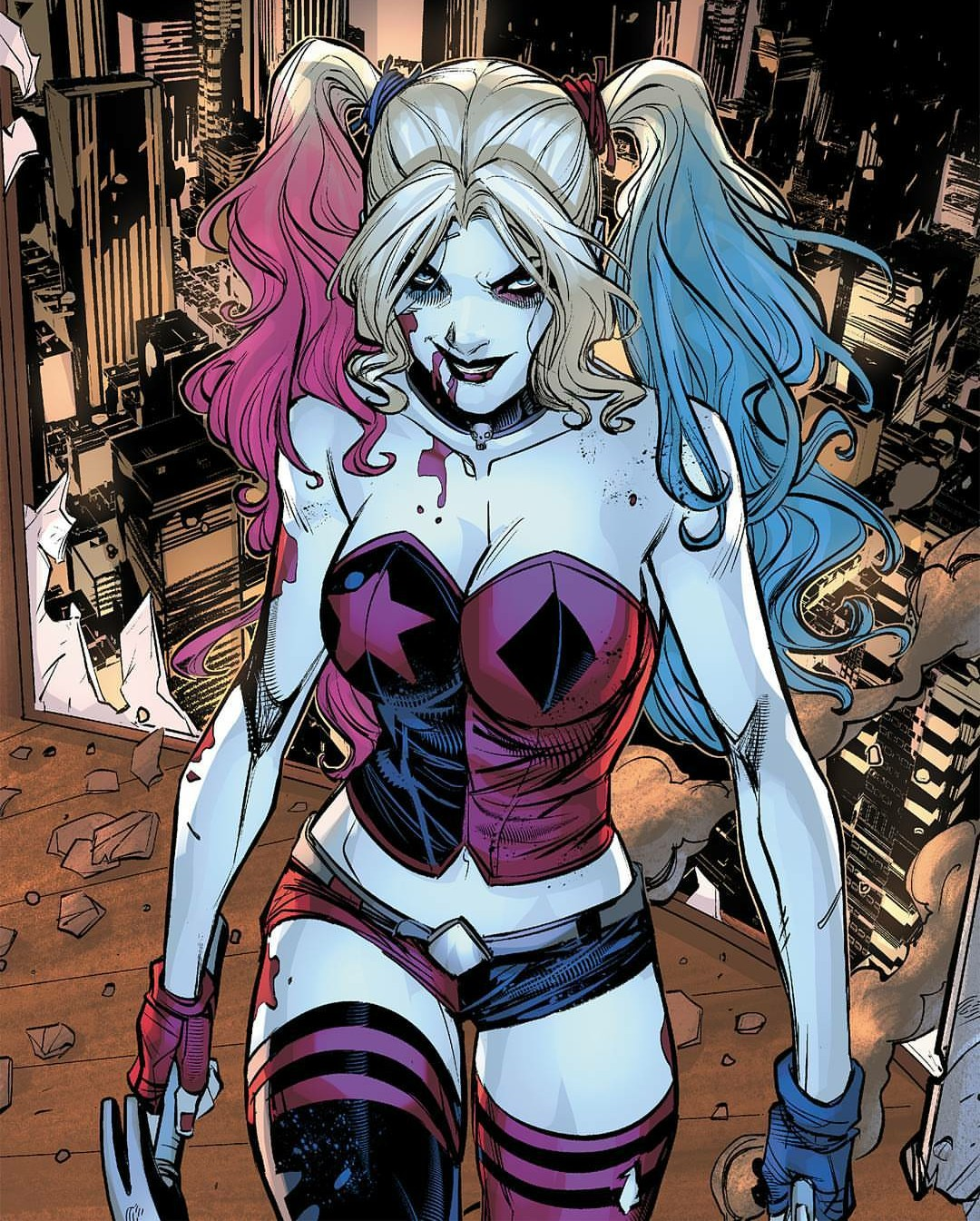 When the Joker catches back up with Harely Quinn, it's awhile after her Suicide Squad days. It starts off with her at a funeral that is apparently being held for assassin Deadshot, who Harely apparently had fallen for while Joker was away. He didn't take too kindly to this. Not at all. In fact he attended the funeral, rendering everyone in attendance unconscious so that he could have a word with and kidnap Harely for his own use. He beats her and tosses her around, talking shit about her before using her as bait, for Batman. The Joker gets his hands on Batgirl by getting his hands on her mother. When he gets her right where he wants her, he makes a very odd request. He tells Batgirl to marry her, or he'll murder her mother right there. At first she's confused by why, but she agrees to help her mother. During the whole reception, a fight breaks out, and Batgirl ends up knocked out, but not by The Joker, but from the hands of her own brother. He knocks her out for The Joker in order to free his mother, and gives her right up to the Joker. 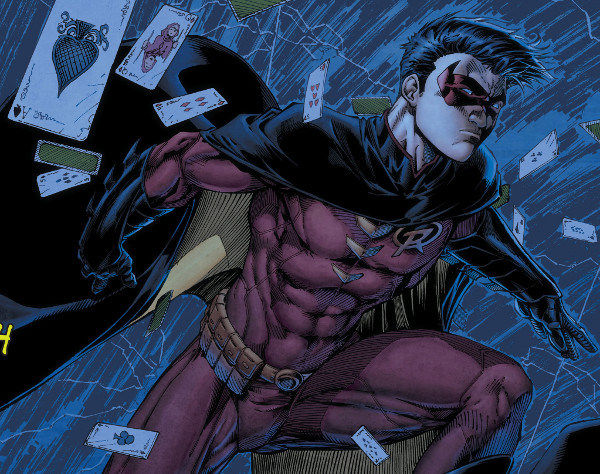 When Joker gets his hands on Red Robin he doesn't exactly deal with him all by himself. No. He puts him face to face with Red Hood. He presents to both Red Robin and Red Hood, each of their fathers tied up with bags around their heads. Joker proposed that they fight each other to the death, and the losers father gets murdered. Red Robin screamed back at Joker, telling him it was a joke to think they'd fight against each other. But, it seems Red Hood didn't exactly feel the same way. Nightwing gets sucked into all this mess when Joker contaminates one of his friends, Raya, with the crazy substance that's been turning people into crazed Joker like clowns. Forcing him to fight here. He doesn't want to, but she's taken over by whatever the Joker has given her and she does not hold back trying to kill him. Defeating her, he goes after Joker, ending up at the Amusement Park, where Joker has everyone else. After a brawl with Joker, Nightwing is sure he's got him beat, until more crazed homeless people taken over by Joker's substance, beat the living shit out of him. 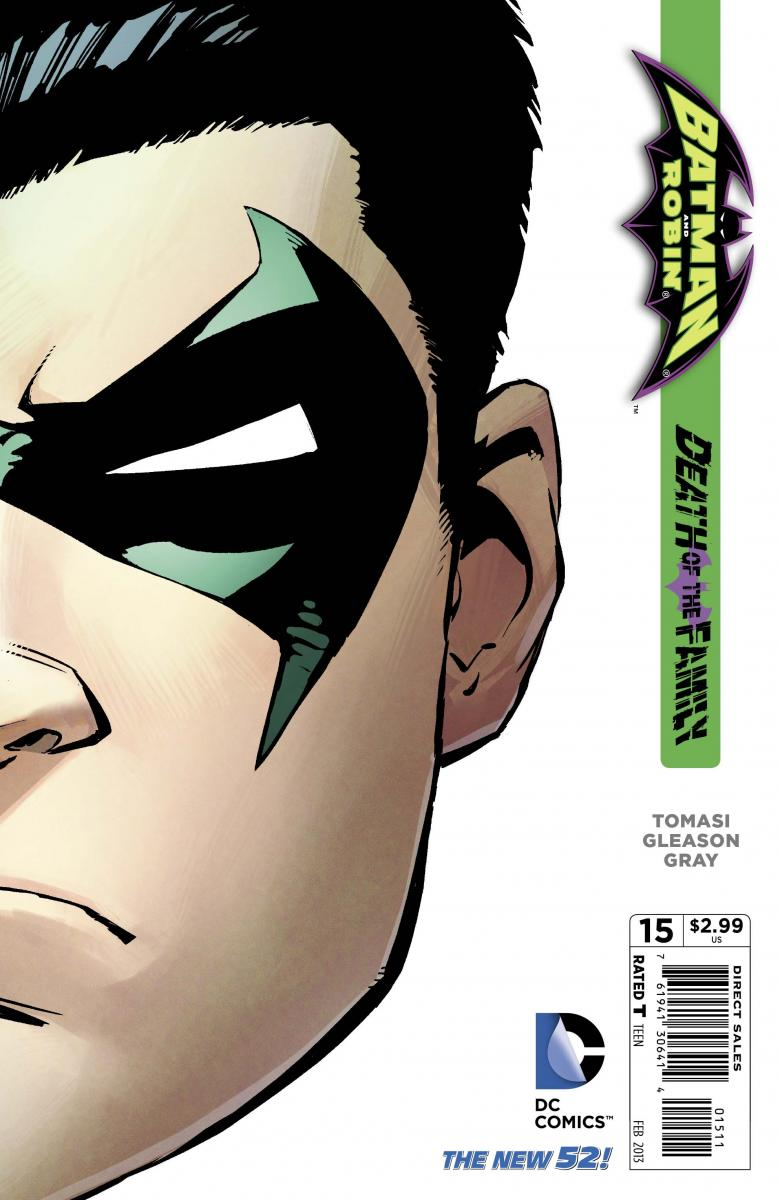 Robin is one of the heroes that was lured to get close to the Joker. Pursuing trouble, Robin slips into a hole, which ends him up in the grasp of Joker. Kidnapped and pitted against a clown crazed Batman, Robin enrages himself, wondering how Batman could allow himself to be taken over by the joker like this, fighting back the best he can. But, he finds himself no match, quickly. Just as Robin meets his defeat, he passes out just before Joker reveals that the Batman fighting him, wasn't even Batman at all, but a random man in a costume.

ILLUSTRATIONS:
4 out of 5
I really enjoyed the imagery in this issue. It had a very dark and sinister feel to it. The women were drawn beautifully, which is honestly something I enjoy in these comics and mangas, definitely part of the rating process. I believe the imagery was perfect for the story, especially the Joker's look. Every time the Joker appears on the page, you can't help but observe everything about his physical features from the janitor's uniform to the peeled off skin from his face being attached by a belt and strings.

STORY:
5 out of 5
Whenever I think of the Joker, I automatically think of a psychopath. It's just something that I picture. A psychotic criminal minded genius. This issue gives you just that. From the cadence of his speech to his incredible tolerance for
pain, taking beatings from Gotham's strongest heroes. You always wonder, what will Joker be up to next, this is one of those things he was "up to", and it might be one of the top 3 best Joker stories I've ever read myself.

OVERALL RATING:
5 out of 5
Overall I have to give this comic a 5 out of 5. There's no way that I couldn't. I could barely put this one down. It kept me interested all the way through. All I wanted to know was how is he going to capture the next person, will they all fall for his tricks? What will Batman do when he finds out what Joker's been up to? I believe that if a book can keep you guessing and not give away the ending to easily, then you've got a good story on your hands. I highly recommend giving this one a read! You won't be disappointed.