The Value Of Anonymity In A Collective Intelligence

cmw (33)in #collective-intelligence • 3 years ago (edited) 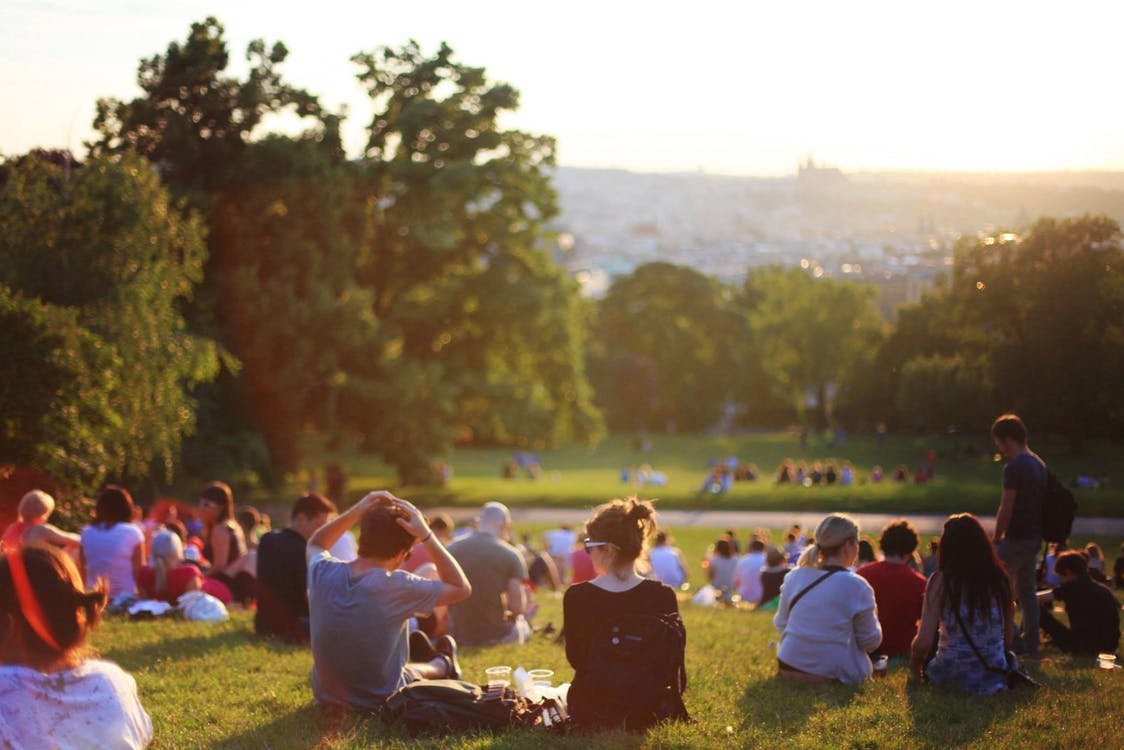 Anonymous in the dictionary is defined as; lacking individuality, unique character, or distinction. If I were to poll a random group of passerby’s as to what words in the above sentence elicited a favorable response, I don’t imagine anonymous would reign as the favorite word choice. Individuality, character, distinction; those are all words that resonate strongly within the world we know today. Our world is a world of individuals and the distinctions between those individuals. We have our heroes, idols our role models. We have leaders.

So what is it about the definition of anonymous that is supposed to inspire us when it excludes seemingly traits we hold of value in society? Individuality is what makes us who we are and gives us the freedom to express ourselves, right? If is our unique character that makes us stand out and gives voice to our point of view. How can living a life of distinction be a bad thing if it is a positive distinction?

Really this story is about power, the production, application and substantiation of power. How power is expressed in today’s societies is a product of individual intelligence and the force brought forth by the individuality, character and distinction of the individual.

Within society this can be formulated as a cohesion of individuals within a grouping small or large. It is still though a system where the inner workings are based upon the power that resides with the individual. It is the power of individual intelligence that forms and gives life to the power structures as we know them in the world today.

First you must understand that a true collective intelligence is an artifact of our technological age. Without modern technology it would not be plausible or possible.

In the world we know today there are two power centers structuring and outlining the existence of our humanity, those being individual intelligence and society. Today the individual, or an association of individuals, benefits society and society in kind returns various rewards to the individual. Society is a reflection of our dependence on the individuality, unique character and distinction of the individual.

Why anonymity? The power of humanity I believe is our ability to capture logic and convey reason. A technologically advanced Collective Intelligence simply places human logic as the moderator and facilitator of human cognition. Anonymity frees the platform from any association between the individuals participating and the power generated on the platform being expressed as it is often today in society; status, prestige, authority

Today’s world can be compared possibly to a large game of monopoly. Yes, there is such a thing as superior or above normal intelligence, talent, etc. There are also elements of luck involved. The whole of human potential is not captured by a small group of individuals. Individuals are simply that, an individual piece of the whole.

An anonymous platform of Collective Intelligence would in actuality support the individual. First consider individuality and why it is valued. Individuals are those who stand apart from the norm of society. This can be viewed by society as a positive or a negative. Many worthy contributions have been made by those society viewed as deficient or outcast. Many admirable individuals were defeated in their aspirations by society.

The issue with human contribution integrated into society through the banner of individuality is that at times it competes with and impedes the forward progression of human logic and understanding.

The Question becomes; how do we harness the potential of the whole, the sum total of each individual cognitive contribution? I believe it is through an anonymous collective intelligence.

In this scenario society now has a larger pool of contributors. Individuals are not rewarded and elevated by society thus allowing them individual discretion as to how the human pool of resources; i.e. the other individuals, are managed.

So in this circumstance anonymity simply means separating the individual from powers society now bestows upon the individual or group of individuals. Powers that within society complete directly and in a confrontational way at times with the human expression of logic, reason and the formation of sound conclusions.

Society embracing a Collective Intelligence is rewarded with a more comprehensive, energetic, robust presentation of individual participation and a more encompassing understanding.

Unique character was an element dis-associated with the definition of anonymous. Character defined in the dictionary often refers to “the aggregate of features and traits” or “moral or ethical quality”.

Why is character so very important? Because as power is relegated in today’s societies to individual or groups of individuals to in a sense manage the human resources that form the base, there must be trust in the actions and motives of the individuals. Within a Collective Intelligence with a foundation attribute of anonymity this is no longer an issue. Anonymity means transparency of process is developed within the platform enabling the power and value once attributed to the individual to instead be fostered by the whole. There is the incentive collectively to build trust in the platform.

By championing a Collective Intelligence I do not intend to imply that our leaders have failed us or that serving with distinction is a thing of the past. Yes, there are those in leadership positions who have no right by any standard of being there; yet looking at the larger picture those of unique individuality, character or distinction have left a truly positive impact upon our world.

Collective Intelligence executed through anonymous collaboration moderated by human logic and facilitated by modern technology is not an affront to the individual.

A society empowered by an anonymous Collective Intelligence does not require conformity. It is a foundation of process intended to accentuate the thoughts and ideas within humanity and is made stronger by the life experiences of individuals.

A platform of Collective Intelligence should empower the individual and create a more productive and distinctive life experience.

Collective Intelligence in one aspect is simply a means to isolate from societal perceptions the value and power of human logic and reasoning. An anonymous collective intelligence creates a stable foundation to realize and effectuate human intellectual potential without creating gates so to speak or social impediments formed of individual positions of power and all the attachments of self to these positions of power.

Anonymous contribution is simply a way to ensure each perspective is integrated regardless of societal perceptions and the value systems formed around individuals within societies.

A society that values a Collective Intelligence, values the whole of the human perspective and experience. This society places the whole of human logic and reason in service to the anonymous base.

do you also need to follow the same people over and over again?

steemit seems to forget the people that make the best comments yet ever more shit posters kreep into my list that i never would follow even if they would pay me for it.

Just as a note, CWM i follow you ... again. Just to make sure that i have more then one proof

I had someone follow me before I ever typed a word. That's pretty good!

Anonymity is not ideal. Wish I had 2 separated versions of me.
And this is where PRIVACY comes in the picture.
If we had real privacy, then there would be no need for anonymity. And that would give us a far more humane life alltogether.

From there with the Collective Intelligence you describe an added anonymity to share knowledge in a de-personalised manner would then give even more value to that intelligence since the actual knowledge shared in the collective intelligence is then no longer, affected by the twisted/double anonymity. And gains more value due to peace of mind provided by real privacy.

A mind that is not at ease is far less productive when it comes to intelligence. Take away the external distractions and the mind can go deeper into processing the actual knowledge.

Thus logic and reason then have more value, or real value, without the 'poison' the distractions.

Does that make sense?

That makes 100% sense. Exactly the way I was thinking. If you could participate and not feel the anxiety of social and political pressures you anticipate due to your "thinking" Then you would "think" more. I started to watch a TED talk this morning on blockchain. I stopped about a minute in, the woman said, "as humans we find ways to lower uncertainty about one another so we can exchange value" This is what it is all about. As you say, "deeper into processing the actual knowledge", that is what we do; our brain is a computer, we process. The issue is we are also emotional creatures in a survival environment, in many ways on our own. Privacy to me is something altogether different and has more to do with power struggles and defensive actions. Anonymity on the other hand is an element that allows us to create together. If we were actually creating and working together as humanity, the environment would be altered and privacy may not be the issue it is now. As you said "Thus logic and reason then have more value, or real value, without the 'poison' the distractions". What are the distractions? That is the question. To me, logic is the human language, the code, the blockchain we use to "exchange value" as she said in The TED talk, and it is totally corrupted.

Could we do without anonymity IF we would have real privacy? (As in 100% verifiable privacy) Is that even possible? hehe

Watching the TED thing now, this lady has a very cryptic way of talking at some points in the talk. :-)

Interesting talk yet it sounds like she has a 'hidden agenda' on certain topics where shy cryptically circles around something.

Really I see anonymity and privacy as both existing and serving a purpose, but in two different worlds. The only place I see anonymity as valuable would be within the ecosystem of some sort of Collective intelligence. The only reason I see it as valuable, or the primary reason; is that is severs the attachments to “self”. Anything you propose online now is valued through the lens of how you are perceived. Your race, age, gender, geographic location, past history, political affiliation, etc, etc. You can be discounted from the start just for being “you”. Regardless of whether what you have to say is “logical” or “reasonable”. It really is not about putting forth our “opinions”, it is about building and creating together and we don’t need the attachments to accomplish that. About the video, to be honest once I got to about the one minute mark and heard the quote I posted, I turned it off. I didn’t mean to make you listen to it all. To me all those TED talk people are a little creepy. I think they are attempting to impress us with their non-anonymity, all their attachments and their individual intelligence.

yes, that's why i need some kind of clone, to be able to keep the anonymous me somewhat anonim

I get you. Open you mouth to speak your mind in today's world and there are people lining up to hate you.

However, the more people that hate you make you stronger. You are one person who spends a little time. And all who oppose you spend WAY more time then you. So you could actually enjoy the attention. You don't need it, but as they want to spend their time and energy to hate you. That shows more about them and their BS then about you.

Hate wastes more power then truth. A fact can not be changed by all the hate of the world. And that makes them hate even more.

All they need to do is realise the fact.

Not sure what i'm saying here...

Great comments! When you can take a negative and gain perspective then you have won an important battle.