$80,000 for a surgery to remove the inflamed appendix?//阑尾炎手术需八万美金？ 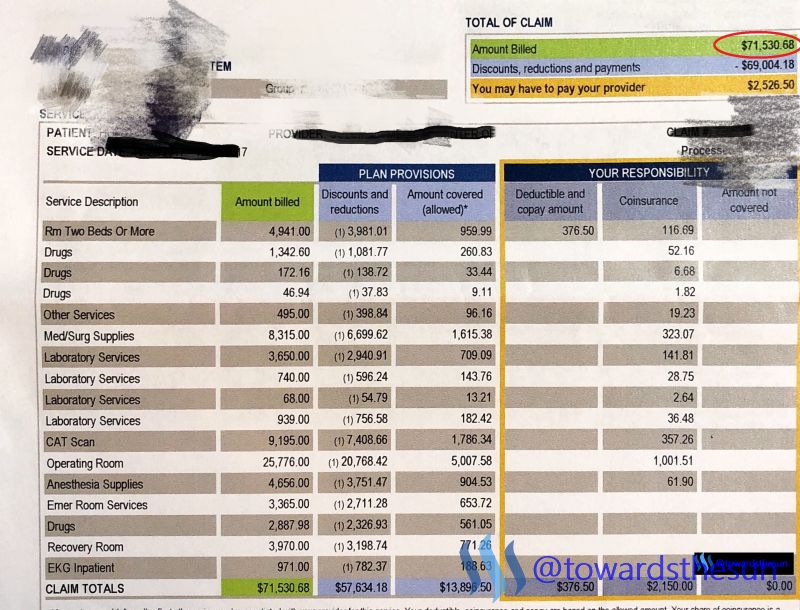 Last month, I rushed to the emergency room due to abnormal abdomen pain. And after the CT scan, the doctor concluded that my appendix was inflamed and needed surgery. So another doctor on duty operate the surgery and I was released the next day from the hospital.

I got the explanation of benefits from the insurance and was shocked by a few numbers.

First of all, the hospital is in-network of my insurance. Initially, it cost around $71,000.

After working with my insurance company, the bill reduced to around $14,000 with applied discounts and deals.

I am ok with this number from the hospital since I have heard that emergency room service is really expensive.

The second big number came from the doctor. There are two separate charges from the doctor (one is for surgery and the other is the medical visit). They add up to around $9000.

And I might be responsible for almost $8000 because the doctor is out of network!!

So I stayed in an in-network hospital, while the hospital assigned an out-of-network doctor to save my life, which I had no choice on who is on duty and who can do the operation.

I started to call the insurance company, and they told me to bargain with the provider. I called the provider and they transferred my call several times, and finally reached a voicemail.

Friends are shocked when they heard about the charges. Since they all believed that schools often have the best insurance. One friend mentioned that a similar situation happened to her co-worker. Eventually, she managed to file an appeal through the insurance company and argued with the provider. The provider finally charged as an in-network provider. But the whole process took a few months.

I guess I need to constantly make phone calls until my voice can be heard. No matter what, I am not prepared to pay over $10,000 for an appendix removal surgery. I really could be broke for this.