I have been wearing glasses since I was 10 years old, at first I had a hard time accepting it but now they are part of me. I tried the lenses but my eyes dry and I do not support them very long so I keep my glasses and I feel naked without. 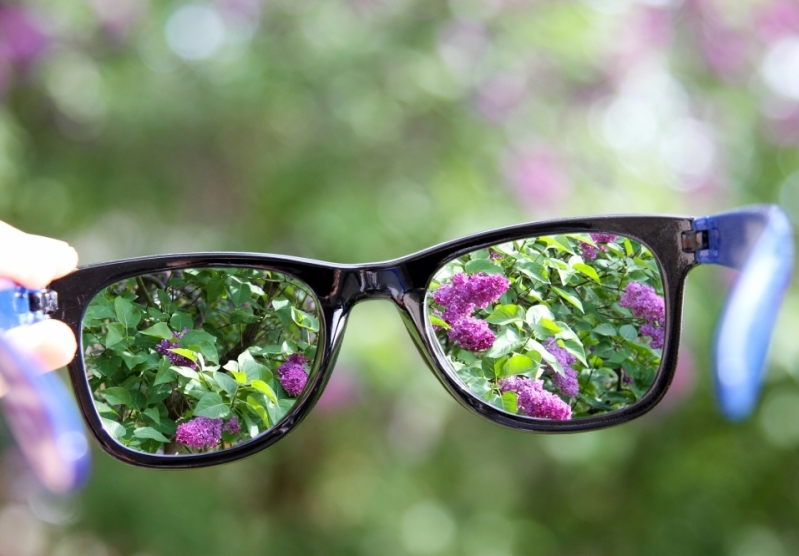 The glasses are an instrument for overcoming visual defects. A pair of glasses consists of a frame on which corrective lenses are fixed and resting on the nose by two nose supports and on the ears by two branches, 80% of the weight of the glasses rests on the nose.

The branches, placed on the ears, ensure the stability of the glasses: equipped with hinges to be folded, they are provided at their end with a tip or sleeve forming the hook for protecting the skin behind the ear.

The frame can be made of various materials: steel, nickel silver alloy or cupro-nickel, plastic or natural material horn or shell type. There are three types of lens mounting :

In the past, there were glasses without branches: • the monocle monocle;
• the binocular eyeglass, called a nose clip when it is held on the nose by a spring;
• the face-to-hand and the theater mirror which are provided with a handle.

From Antiquity to the Middle Ages

As early as the first century, the Seneca philosopher noted that an object observed through a glass balloon filled with water appeared larger. At the same time, Pliny the Elder describes the use of an emerald by Emperor Nero to follow the gladiator fights; it is possible that this is an optical lens to correct myopia, but the use of the emerald can also be explained by the belief in the virtue of color, or even of the stone itself.

The Middle Ages sees the development of monasteries in particular, the use of the reading stone, a magnifying glass placed on the written text, intended to combat the effects of presbyopia. Their invention is sometimes attributed to Abbas Ibn Firnas, 9th century Andalusian Berber, known to have developed the rock crystal cutting technique. The work of Alhazen, founder of physiological optics, around the year one thousand, give a scientific basis to this technology. Before being made of glass, the reading stones were made of semi-precious stone or rock crystal, the technique of glass making still producing too many bubbles and impurities.

Franciscan monk Roger Bacon relies on Alhazen's work to experiment with glass reading stones. In his Opus Majus of 1268, he brings the scientific proof that the particular surfacing of lenticular glasses makes it possible to enlarge small letters. His invention would have been popularized by the Dominican monks Allessandro della Spina and Giordano da Pisa met during his stay in Pisa.

It was in the thirteenth century in Florence that the physicist Salvino degli Armati developed a pair of glasses set in a wooden circle, the thickness and curvature of which can magnify objects and texts. Eyewear and ophthalmology are developing in Italy. The first glasses without branches and which are fixed on the nose, appear in Venice at the end of the 13th century.

They consist of two round convex lenses, Murano glass with superior optical qualities, encased in wooden circles, horn or leather, and individually attached to sleeves riveted by a nail. These heavy glasses, called besicles, used by the monks copyists, allow the binocular vision but only improve the presbyopia.

The invention of the printing press increases the demand for glasses. In the fifteenth century, besicles evolve with the replacement of the nail by a bridge that can be wood, metal, horn, leather, tortoiseshell or whalebone: these are the needles with rounded bridge. They will be provided in the following centuries, a ribbon tied behind the skull or string around the ear to ensure better support. After the Middle Ages

The concave lenses appear for the nearsighted in Florence in 1440.

In 1645, Jacques Bourgeois improves the spectacles by imagining concave glasses on one side of the eye and convex on the other. In 1728, the English optician Edward Scarlett created the first mounts with short branches ending with a metal ring, sometimes covered with velvet, which is placed on the temples.

These temple glasses are worn mainly by the noble, short branches allowing the removal of the glasses without disturbing the wig. When the wig ceases to be fashionable, Scarlett innovates again by lengthening the branches and bending them at the ends so that they are fixed behind the ears: the modern glasses are born.

The bourgeois used the binocle in the seventeenth century and the face in the eighteenth century, the latter being competed by the monocle and nose clip in the nineteenth century. In France, Sieur Thomin, a Parisian eyeglass manufacturer, made these temples in 1746 called temples to breathe easily because they replace nose clips. 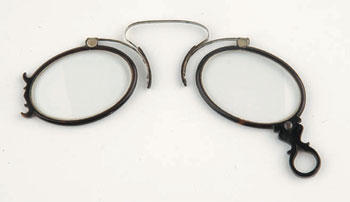 However, their pressure causes headaches. In 1752, English optician James Ayscough created the first tinted glasses. For him, they are corrective glasses and not sunglasses because he thought that blue or green hues corrected the vision. They are equipped with hinged branches, which reduces the discomfort of the pressure of the branches on the nose and temples.
These glasses whose branches go over the ears are called eyeglasses.

The glasses were round until the end of the eighteenth century, which then saw the development of fashionable oval glasses from England: smaller and better optical quality, these glasses significantly reduce the mount. The bifocals are created in England in the late eighteenth century.

In 1796, Pierre-Hyacinthe Caseaux master-cloutier in Morez was inspired by the English who already produce metal frames and adapted techniques specific to the art of metal to make a thin mount with wire.

These glasses have a great success and Morez has since become the capital of French eyewear, representing alone 55% of its turnover. Together, the cities of Morez and Oyonnax, the latter being specialized in plastic frames, account for 80% of French eyewear.

In the nineteenth century, the glasses are democratized but are still considered unsightly. Their mass production, thanks to mechanization, has supplanted the traditional production of silversmiths and blacksmiths who created bespoke or series glasses and were sold by peddlers. In 1825, the physicist George Airy invented corrective lenses correcting astigmatism. Five hundred years after the appearance of the spectacles set on the nose, lighter nose clips appeared around 1840. Worn by both women and men, these statutory objects, also known as Nuremberg's wire glasses, are popular and worn until around 1935. The ear-glasses are sold until 1857, the year in which the Paris optician Poulot invents the nasal support.

In the mid-1950s, the design appeared in the field of eyewear, which then uses plastics whose molding and properties lend themselves to the inventiveness of creators: the bezel is no longer simply a medical prosthesis . This movement is accentuated in the years 1980-1990, many designers launching their collection, and glasses become a fashion accessory, combining ergonomics and aesthetics. Each year, the new frames collections are presented at international optical shows.

With the development of screening, eyestrain and reimbursement of glasses by mutuals, their market has become important in developed countries. Thus, in 2012 in France for example, 13 million pairs of glasses are sold, representing a market of 4.7 billion euros with an average renewal frequency of 3.5 years.

Options drive up the price like hardened, thinned lenses, the treatment of anti-reflective, anti-fouling, anti-fogging lenses or the development of children's eyewear means that the optical market weighs ten times more than ophthalmic health expenses. 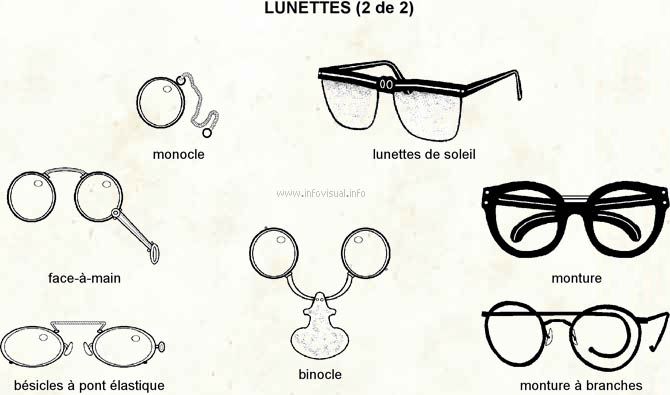 I totally get what you are saying! I started wearing glasses 2 years ago because I realised that my eyes weren't keeping up anymore and I couldn't see far objects . Even though I am still shocked that I wear them and everybody asks me when I started wearing :)) I now embrace their existance. Nice post :)

Hello @indesta120282 how are you today?
Interesting article about glasses. We almost daily encounter people who wear glasses, but this has become familiar to us and we do not pay attention to it. Glasses seem to us an ordinary thing, but in fact it is a real visual tool.
Throughout its history, glasses have been constantly changed. Some changes were designed to improve the structure and make it more comfortable for a person. Other changes that we see now are changes that make glasses more attractive. That is, glasses in our time are not only an accessory that helps people with poor eyesight, but also what adds a certain style to your image.
The most famous stereotype is that people wearing glasses are smart. But this is not always the correct statement.
Thanks for the interesting article

I feel good today thank you ;-) @lndesta120282
Why dont u try LASIC SURGERY?
To get rid of glasses?

I appreciate you history that you are wearing glass since 10 years old.
Your glass is so nice

some people are cute in glasses so you are now fine with it :)

We've come a long ways. Someday glasses as we know them will seem primitive. People will wonder how we put up with them. Already there are so many people that can get surgery and not have to wear glasses anymore.

@indesta120282 glasses have now been taken over by small lenses. Easy to wear and use. What had started long ago by the use of concave glasses we hv reached to that again with some fine magnifying lenses for the beautifull eyes.

some photo of glass are ripping!!
got many information about glass !!
thanks for sharing !!

Awesome article.Same here I feel awkward wen I am not wearing glasses

For more than 30 years use lenses for a high myopia, some time ago I operated with laser and I released the lenses, but sometimes I miss them a little.

Wow, thanks hey. I appreciate this history ... There is an assumption that people who were glasses are intelligent.
How true is this, and does it apply to you? No offence @lndesta120282

good and useful information. Thanks

Nice glass I like this glass
Can you give me this glass
Thank for your stylist Glass.....

Congratulations @lndesta120282, this post is the third most rewarded post (based on pending payouts) in the last 12 hours written by a Superuser account holder (accounts that hold between 1 and 10 Mega Vests). The total number of posts by Superuser account holders during this period was 1592 and the total pending payments to posts in this category was $12377.24. To see the full list of highest paid posts across all accounts categories, click here.

Congratulations, your post received one of the top 10 most powerful upvotes in the last 12 hours. You received an upvote from @glitterfart valued at 130.72 SBD, based on the pending payout at the time the data was extracted.

This post remembers me I had a glasses when I was 12 years old, but the glasses has broken and I dont wear any glasses then

Hey, like your post about glasses. Something refreshing and new to read about for a change. I wear glasses for almost one year since I noticed that somethimes my vision was blurish.. Very informative. Keep it up👍