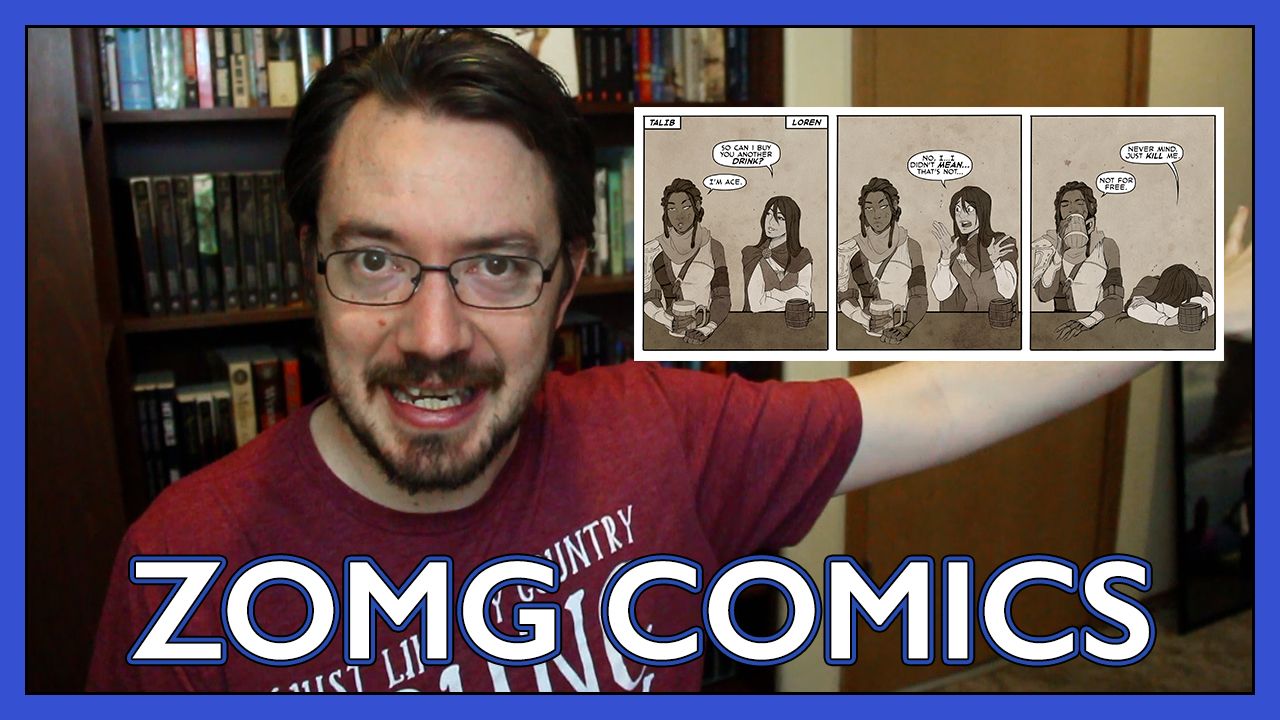 Hello, Rebel, and welcome back to my life.

Today I want to talk to you about comics.

Comics are something that I love kind of unconditionally, with my whole soul, and I've been thinking a lot about why that is.

If I happen to go to a comic store or a convention where comics are available, I'll pop them open and start reading and then look up three hours later and wonder what happened to the clock.

Comics as a form of media and entertainment are not as old as novels, but they came in earlier than cinema or video games, which are the other two big types of media that I consume a lot of.

And, of course, the reason they take hold with so many people—and why they still grab ME so much—is that they're this incredible amazing combination of written and visual storytelling.

The biggest difference between writing a book and making a movie is budget.

In a book, you can literally create whatever you want, for free. You just have to invest your time into it and describe it well enough.

In film, you can't represent absolutely anything for no cost whatsoever. There's special effects, there's makeup. You can do it on the cheap, but you can't do it for nothing.

Comics are a bridge across that gap. Comic artists can create literally anything they want to, as long as they have the time and the desire to do so. And that visual representation is what I think makes comics—and Comic Cons—such an amazing experience.

I never really got into any form of drawing, and I don't think at this point I could ever dedicate enough time to it to become any sort of professional artist. And man, sometimes I just really really wish I had.

The one thing I've always felt like I was missing in the books of Underrealm is a visual representation of what is so clear in my own mind.

But there are only so many of them, partially because they cost a lot of money.

Yes, I AM saying that I want to produce Underrealm comics and graphic novels. And, more than that, I recently did.

I've been talking a lot about The Chronicles of Underrealm, a series of short stories set in the world of Underrealm, that are releasing on our Patreon.

(If you haven't heard of it before, you should check it out and support our kickass diverse authors.)

Well, I've been doing a project where I've been reaching out to comic artists whose work I've followed for a while. I've been commissioning small scenes from The Chronicles and turning them into comics.

This is a scene that I came up with and wrote out and commissioned an artist to create.

And I am so happy with it.

In that brief interaction between Loren from the Nightblade Epic and Talib from the Academy Journals, I feel like Loren becomes more real and has more emotion and more personality than I have ever been able to get out of the words I have used to describe her.

That is the magic of comics. It is unbelievable how much you can communicate in just a couple of drawings of a character, even if you think you already know and love them.

There will absolutely, 100% be comics of Underrealm in the future. Actual comic books that you can hold in your hands and read, as well as graphic novels that will show you the characters and places who have only existed in my mind for literally years now.

In the meantime, I will keep creating as much visual representation as I can, when I can. If you want to support that, please do check out the link to the Chronicles. It is as close as I've come to creating the visual world that Underealm has always been to me.

That's all I've got for you today, Rebel. Do check out the Patreon and help support future Underrealm stuff and our awesome authors.

Thank you so much for watching, and I will see you next time. Byyye!