HE TOOK THE PUNISHMENT FOR OUR SINS 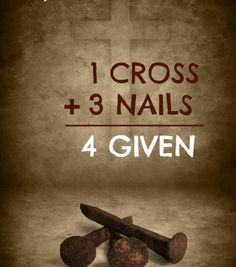 But he was wounded for our transgressions, he was bruised for our iniquities: the chastisement of our peace was upon him… (Isaiah 53:5).

The Lord Jesus suffered and endured the pain and shame of the cross, not because of His sins or for Himself, but for us. He took our place and bore the punishment for sin on our behalf.

While on the cross, bearing the burden of our sins, He cried out in anguish, “…Eloi, Eloi, lama sabachthani? which is, being interpreted, My God, my God, why hast thou forsaken me?” (Mark 15:34).

God turned His back on Jesus because our sins were laid on Him. Habakkuk 1:13 tells us that God is holy and doesn’t behold iniquity.

The separation from the Father on account of our sins, was what Jesus never wanted, for which He prayed in the Garden of Gethsemane,

“Father, if you be willing, take this cup away from me, nevertheless not my will, but your will be done.”

The Father’s will prevailed. Jesus died on the cross, and descended into hell. He was put to grief.

Upon taking all the punishment that was necessary, the Bible says He became justified in the Spirit (1 Timothy 3:16), and was raised back to life for our justification:

“Who was delivered for our offences, and was raised again for our justification” (Romans 4:25).

When He died, you died with Him; when He was buried, you were buried with Him. When God raised Him from the dead, you were also raised together with Him in newness of life!

Sin and its effects and consequences have no dominion over you.

You’re free to serve the Lord and live for Him, in righteousness, and true holiness.

You’ve been made, not just righteous but also, the righteousness of God in Christ Jesus.

PRAYER
Dear Father, I rejoice, knowing that the Lord Jesus paid the ultimate sacrifice for sin, and I now stand justified in your presence. Thank you for ushering me into this new life of righteousness, where I reign and rule with Christ forever, in Jesus’ Name. Amen.
#stach #wafrica #steemgigs #nigeria
3 years ago in #christianity by supreme7 (35)
$0.00
6 votes
Reply 1