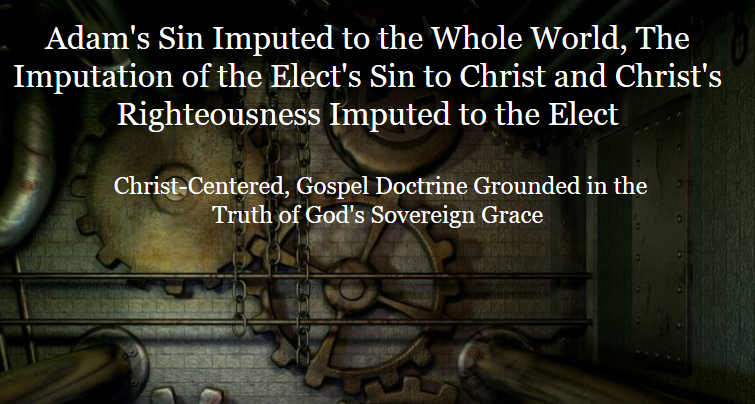 "For He has made Him who knew no sin, to be sin for us, that we might become the righteousness of God in Him." II Cor 5:21

The righteousness of God revealed in the gospel (Rom 1:16-17) established and brought in by our Lord Jesus Christ (Dan 9:24) is something that is merited by Him and legally transferred by the means of imputation to the account of His people by God. It is something that cannot be seen with the human eye. In other words it is invisible. Does this mean it is not real or actual? It does require the eye of faith to see and believe it is enough (Rom 9:30-33). Some religious folks say it is not enough and is merely a "paste on" righteousness. That is what the Roman Catholics and others religious folks mean when they call it Legal Fiction.

The righteousness of God revealed in the gospel, the everlasting righteousness Christ brought in, is as real as it gets. In fact, it is the MOST real thing in the world. In fact, one of His names proves it so; "The Lord Our Righteousness" (Jer 23:6). The problem most have is that they cannot see it because takes God-given faith to see spiritual things. The blessed imputation of Christ's righteousness is real and really does have an affect that is based on something of measured value by God Himself. It is the glorious merit of Christ’s Person and work. He was born under the Law to keep, fulfill, and magnify it along with His sacrificial death on the cross completely satisfying Law and justice for the sins of His people. This was righteousness established, the obedience of One (Rom 2:13 & 5:19) It is finished He cried (John 19:30)! It is real and actual, not make-believe or pretend! We know this by Christ being raised from the grave and where He now sits victorious at the right hand of the Father on High. Think it is not real? God who is Judge says it is and the word of God says "it is God who justifies" (Rom 8:32). Do you believe Him?

The Work of Receiving Sin Imputed

As Christ represented and substituted for His people in paying the penalty of the curse of the Law, which they had broken, it was specifically done by the means of imputation. Christ, who was perfectly holy and sinless, willingly took on the full responsibility of the guilt and condemnation from the sin of His people, by way of legal transfer, their sin charged to His account. God the Father transferred every sin (past, present, and future) of His chosen people and took it from their account and laid it to the account of Christ, officially and legally. This was actual, not pretend, not potential or hypothetical. This is an actual historic event that is already done, which nothing can be done to add to, take away from, or to change it. It is finished!

This type of work must be lovingly particular to be effectual. If it were "general" and not specific it would affect the attributes of God in a negative way. It would be in human terms, "the tail wagging the dog" so to speak, or "the cart before the horse". Man is not the cause that affects God, but the other way around. God's purpose shall NOT fail. Any other system or scheme of salvation makes man the savior and cause of his own salvation by works and we know the Scripture is clear that this cannot be not the case.

To say it more clearly, if someone's sin was really imputed to Christ then Christ really took on the full responsibility for them to put that sin away forever. It is not that He actually took on everybody's sin by imputation and then the affect of that is dependent upon everybody doing something to make that activity finally succeed. This again, would make man his own savior and make the blood of Christ only something to walk on to make our own work shine in its merit. God hates this idea.

Why is the Gospel the Power of God Unto Salvation?

"For I am not ashamed of the gospel of Christ: for it is the power of God unto salvation to everyone that believes... For therein is the righteousness of God revealed from faith to faith: as it is written, The just shall live by faith." Romans 1:16-17

This revelation of the righteousness of Christ is the ONLY thing that will rightly show sinners that their own righteousness is sin and needs to be repented of. This is the sin we cannot detect with our conscience but rather our natural conscience stirs us up to try to establish a righteousness of our own. By trying to do what we think is good we actually sin (see Romans 10:1-4). Only the gospel, with real acceptable righteousness by imputation, can expose this error. The gospel therefore must contain more than the facts of His death, burial, and resurrection. It must contain at least a basic idea of a transferable righteousness established by the Substitute when He satisfied the demands of the Law and justice of God.

Psalm 32:1-2 KJVS
Blessed is he whose transgression is forgiven, whose sin is covered. [2] Blessed is the man unto whom the Lord imputeth not iniquity, and in whose spirit there is no guile.

Romans 4:6 KJVS
Even as David also describeth the blessedness of the man, unto whom God imputeth righteousness without works,

Romans 4:8 KJVS
Blessed is the man to whom the Lord will not impute sin.

Romans 4:11,22 KJVS
And he received the sign of circumcision, a seal of the righteousness of the faith which he had yet being uncircumcised: that he might be the father of all them that believe, though they be not circumcised; that righteousness might be imputed unto them also: [22] And therefore it was imputed to him for righteousness.

James 2:23 KJVS
And the scripture was fulfilled which saith, Abraham believed God, and it was imputed unto him for righteousness: and he was called the Friend of God.

Cats must have fat in their diet because they can't produce it on their own.

Thank you for your upvotes. Click The Cat Join The SteemThat Movement!

Congratulations @gospeldefense! You have completed some achievement on Steemit and have been rewarded with new badge(s) :