My cat Bars loves to watch TV. He mostly watches the morning news, right before my wife and I go to our jobs. When I watch science or travel shows, the cat joins in. Once he saw Earth from space. He started backing up and crouched down, ears back. I think he’s gotten scared by the view. Not all cats watch TV. When I’m home watching Netflix or travel shows, he lies on the couch next to me. We have a theory, that he does that, because he considers himself a part of the family.
Once he sat on a chair behind the TV, at an angle where he couldn’t possibly see the screen. And another time he watched the screen when the TV was turned off, while having the look of “don’t bother me, I’m watching TV”.
Here's a list of reasons why a cat might watch TV:

1. Cats see TV as separate frames instead of fluid motion
The common TV frame rate is 25 frames per second (fps). The human eye sees motion as partially fluid beginning with 12-16 fps, and completely fluid by 18 fps. The feline and canine eyes see only separate frames if the frame rate is below 40 fps. So they see static pictures, but do not understand why they are changing so quickly (TVs have interlaced scanning, as well) and what is shown on them. Modern TVs and monitors have a 100 Hz refresh rate, so cats and dogs don’t see interlacing, however, they still see static images, since the signal rate is usually still 25 frames per second.

2. Special ads for pets
In 2007 in Europe, Whiskas had aired “the first TV ad for cats”, which was intended to overcome the inertia of their perception. In November 2011 Nestle made an ad for dogs. It was first shown in Austria on national television. Nestle used high-frequency sounds, silent for humans, but very perceptible by dogs. They also filmed the dogs’ reaction to the ad. Pet food manufacturer Purina is also known for unusual advertisement choices. In August of 2011 the company produced a special lactose-free ice cream for dogs. But a similar ad had no effect on cats, since the TV does not convey smell. And the cat always trusts its nose!
Perhaps, in the near future, TVs will be able to convey smells. Then, possibly, all the cats on Earth will become screen junkies. The next logical step would be to create special channels for cats…

3. Animals react to sounds from the TV
Or to long static shots (with no movement and change) – these are clearly visible to cats.

4. Curiosity
It plays a major role here, since cats are curious by nature. When a kitten sees the TV for the first time, it reacts to it differently than an adult cat: it walks up to the TV, touches characters with its paws, goes to look behind the TV (hoping to find something live). When the kitten grows up, it understands, that the mouse shown on the screen cannot be caught. So the cat doesn’t try to do that, and just watches it move around instead. As to what the cat thinks at that moment – ask the cat yourself.

5. Young cats mistake the TV for a window
Every cat likes to look out the window. So it sits close to the screen. With time comes an understanding that the screen is not a window, but sometimes, something interesting happens there anyway. And it can be viewed from afar. Therefore, when the cat comes to the living room to watch Netflix or an animal show – and cats pay an increased interest to such shows – they lie down on the floor or in a chair two to five meters from the TV screen. At that range the cat sees the screen with the best detail and clarity.

6. Cats watch the TV because the rest of the family watches it
Cats seldom like to watch TV by themselves. But if the whole family sits down for some screen time, the cat is compelled to join in. And so it sits with everyone else, viewing the screen. Where you go – it goes. The cat considers itself part of the family. My cat follows me from room to room, leaving the room only to feed or use the bathroom.

7. To pass the time
Cats are usually calm and patient. Watching TV lessens the time until the next food intake.

8. Cats like to contemplate
Cats like to sit and spend their time space around them. The fact that they watch fast-changing images on the screen is no more notable than cats watching fire in a fireplace, and does not imply them understanding the TV show. But, nevertheless, there are known cases of cats learning to press buttons on the TV remote. Owners that keep cats for mouse-catching purposes, notice that cats play with captured mice for a long time, in some cases, using objects to torment them.

9. Cats are hunters
That’s why they like Animal Planet and Discovery. Just imagine how fun it is to watch a lioness hunting a gazelle or antelope. Perhaps the cat feels itself being larger, and imagines itself in place of the lioness. 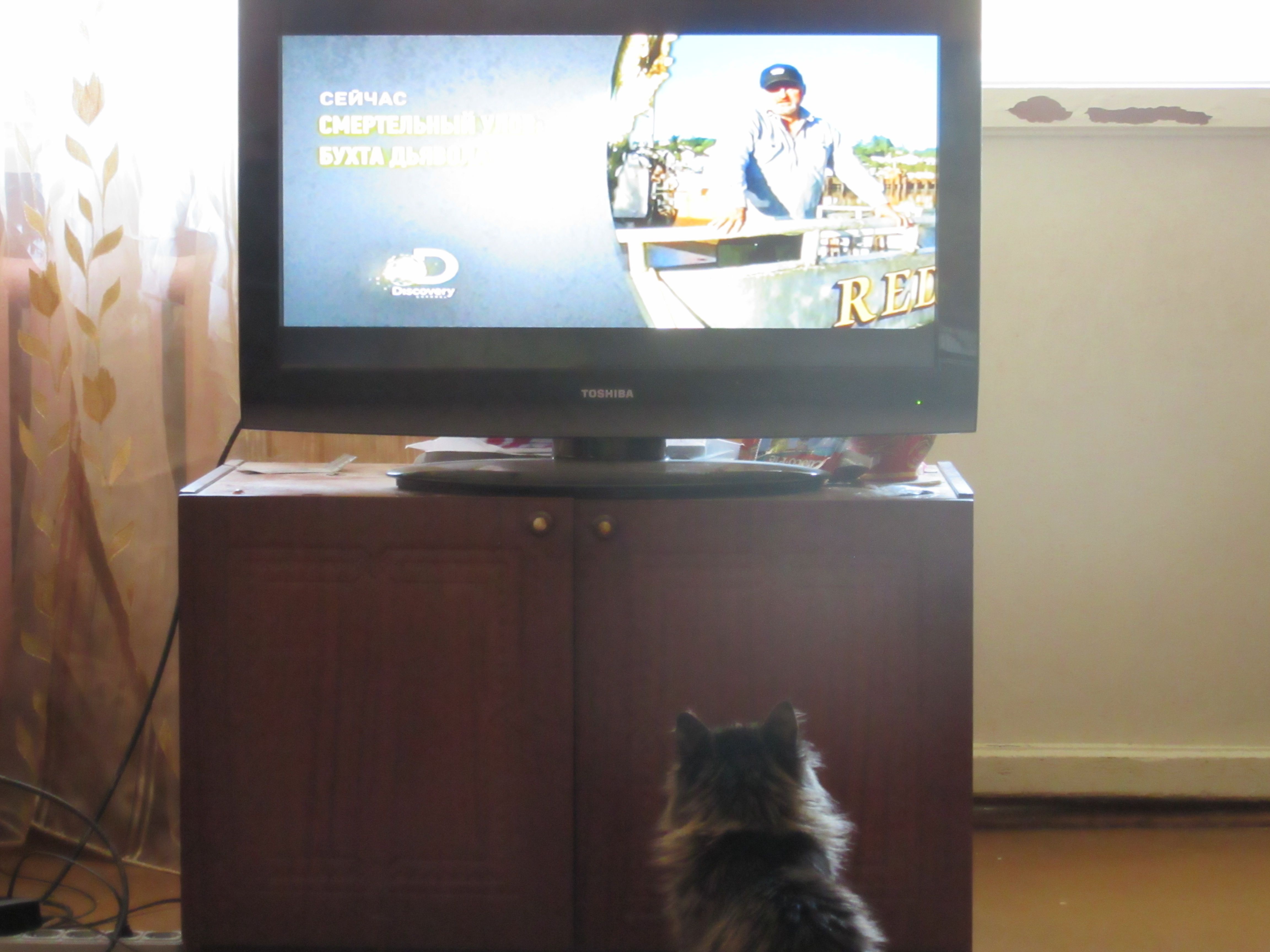 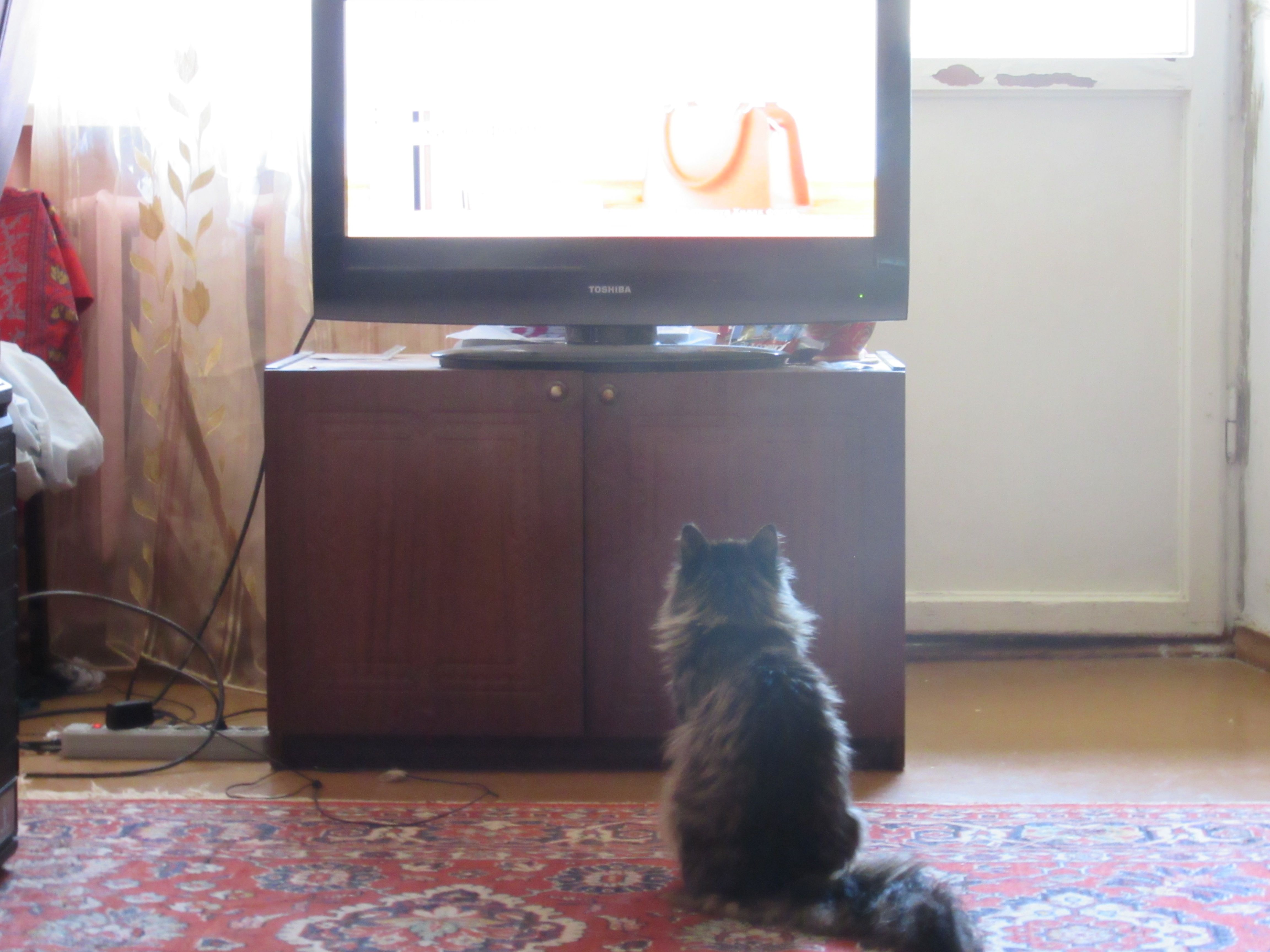