Giving incentives to shoppers are the trend nowadays to increase the chances of them coming back. By operating a rewards and incentives program, customers will b![cashbag ico review.jpg]e rewarded with either discounts or product prizes. But more often than not, the requirements for the redemption of these rewards are too demanding and time-consuming, and not really what the shoppers need. It would be nice for the shoppers to receive cash back of the amount they spent on their purchases. Cashback can be used for other future purchases or can be withdrawn to be used for other things. In this ICO review, we are going to talk about CashBag, a cash back program that will revolutionize the way rewards program should be done.

CashBag is an existing cash back or loyalty company for online e-commerce businesses. The CashBag Company has the same vision as the already successful and established company Groupon. Groupon is the most famous website for cash backs in any online purchases. In fact, Groupon has made more than $2.8 billion in annual revenue last year. CashBag, on the other hand, was established last 2016 and right now, it has more than < style="text-decoration: underline;">130,000 users and is connected with over 500+ merchants including some of the biggest names in e-commerce today such as AliExpress, Booking.com, Hotels.com, and eBay. You can visit their website at CashBag.co to see what CashBag is all about. 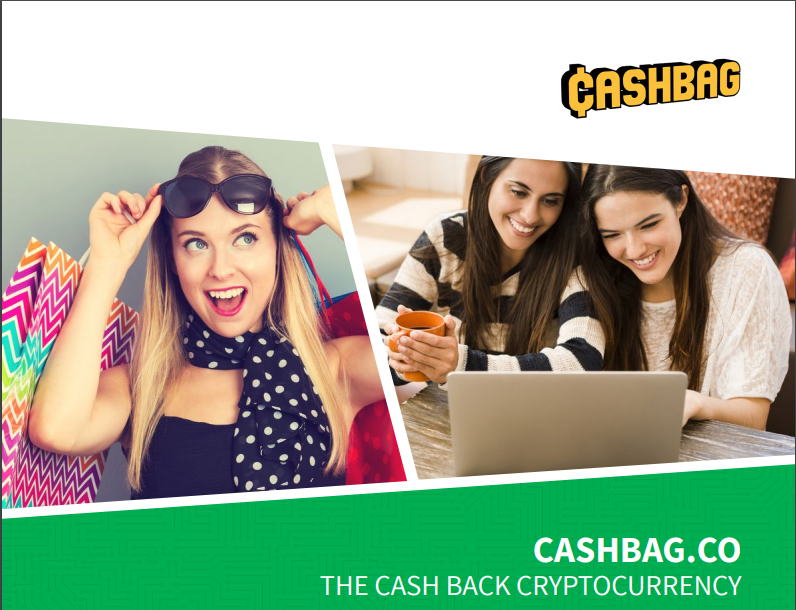 When it comes to product development as per their roadmap, they will release the new blockchain-based CashBag platform early this year. A member of their team stated that the new platform is almost finished and they are looking forward to releasing it soon. So this is good news for all interested investors of the CashBag ICO.

To comply with the law requirements, CashBag is planning to conduct KYC verification checks to avoid cases of money laundering or terrorist financing which is strictly illegal in all countries. This is another good thing for the investors because law-compliant ICOs are most of the time the same ICOs that will be successful in their goals and missions.

CashBag is using a standard Ethereum-based ERC20 utility token that will serve as the currency used inside the CashBag ecosystem. These tokens have a real-world supported value and the cash back received by the members will be in the form of the CashBag tokens or CBC tokens. They can use these tokens to purchase other items from any CashBag participating merchant, trade with other cryptocurrencies in exchange platforms or convert them to any fiat currency for use outside the blockchain.

For the token sale, a total allocated supply of 120 million tokens will be sold. Right now, the price of CashBag tokens or CBC is 6000 = 1 ETH or with the current value of ETH right now, each CBC is priced at around $0.05 cents each. So, if you are planning to invest in this promising ICO, now is the perfect time to do it. All the unsold tokens during the ICO will go to the token purchase platform for the advertisers until the initial allocation is diluted. And the team also has a plan to buy back from the circulating token supply which is a good thing to raise the value of the tokens in the future.

How good is the marketing strategy of the team and how many people are talking about this ICO? For the hype, they are on medium scale hype which I think is a good enough number of people to attract potential investors during the ICO.

The CashBag team may be small in number but their experience will definitely speak for them. The CEO and Co-founder Jonathan Miller have more than 18 Years of experience in the business industry. In fact, he owns a company named Forge Media Investments which he is operating for more than 15 years now. He is joined by Kirsty Henderson as Co-founder and Business Lead of the company. She has over 8 years of experience in the e-commerce industry and has worked as an e-commerce specialist, strategist, project coordinator and general manager before founding the CashBag Company together with Jonathan Miller.

They only have 2 ICO advisors which, for me is quite a small number compared to other successful ICOs before it. I think they need to acquire more advisors especially blockchain and marketing advisors because better advise can really help their new blockchain-based cashback marketplace project.

To conclude this review, I see great potential for this ICO to succeed because of a number of reasons. It is an already existing company and has a working product ready. They are also partnered with some of the biggest names in e-commerce right now so attracting a lot of people to register for their platform will not be a hard thing to do. Integrating a company into the blockchain is what sensible businessmen should do right now because blockchain will definitely disrupt the market and economy of every country, and it is already starting to do so. All in all, I give CashBag a positive rating because I believe it is a great company that will do even greater things with its integration into the blockchain technology.

Relevant Information in the Nutshell