@joshuamaslamoney was asking if I had any photos of my old Skyline R33 and my Nissan 200sx, well here is an old photo of my Nissan 200sx S13. I'm guessing this photo is from 2005'ish.

I bought this car as a runaround after selling my Skyline R33 and moving to Sweden. Later on I imported the car to Sweden and sold it to some Drift racer dudes from Norway! 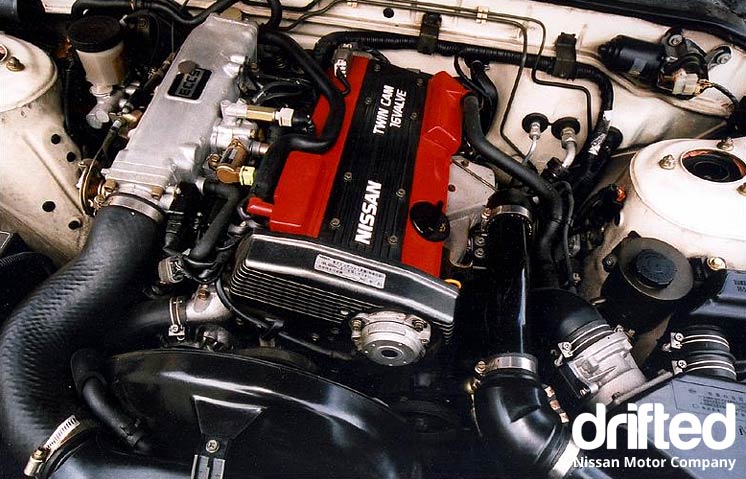 I fitted a Mongoose stainless steel exhaust with no catalyser, open air filter and removed the boost restrictor. This provided the car with a substantial improvement in BHP which could be felt every time you hit boost. The turbo was pretty noisy too making a very rewarding whine and flutter.

The car was substantially faster after the mods :D Nice article, good to see the some of the guys old projects and builds getting up here on steemit. cant help but notice the white engine bay and burgundy exterior paint. did you respray it and colour change ?

Also love the GT style spoiler/wing you got going on there and the factory CA rims, wow havent seen a set of them around for a while, lol. got any more pics ? would love to see more of the car.

Hi mate, no I didn't have my own pic to show the bay, had to find one. I linked the source. It was a very clean example, even the engine bay and interior were very good condition. I have some more exterior pics I'll dig em out.
The wing was made by my father, he's a bit inventive like that. It was made of aluminium. Fully functioning aero too, he used to build a lot of RC model plane wings ;)

Ah ok, must have missed it on the read through. oh nice so its fully custom and works properly, nice . dont see that too often when it comes to home made modifications, lol. im an ex fiberglasser and have seen some monstrosities and even created some myself, a lot of the time people want thelook and forgo the usability factor, carbon fiber is one of those which gets abused frequently, carbon hood weighing more than the original unit , lol.

Yeah, if you going to build a monster wing, it better work :)
Wow, carbon hood is heavier, I guess it needs to be thicker and have more supports right?
RX7 factory hood is really light, but doesn't help cooling much :(

ah its just because they want the "look" of carbon without paying for the performance of carbon. Legit units can be lifted with the pinky finger, lol.

Smokey's Curation Team loves your JDM content and wants to thank you by upvoting your post, Arigatogozaimashita - Smokey Upvoted

That is the neatest CA18DET I've ever seen! Could eat off of it

My father used it when I moved to Sweden, he decided eventually that maybe at almost 70 he was getting a bit old for a 200sx :D So we imported it over.

nice 240! I wanted to buy a 240 myself, but it got sold when i collected the money, so i picked up a Volvo 740 Turbo with almost same power. do you still have it? I would love to see it more, it looks clean af!

No I sold it, currently have an RX7. Might have some more pics somewhere, it was a long time ago!

you sir, have a great taste!

Haha thanks, gonna make a list of cars I have owned. Should be interesting 😈

When you say 'substantially faster' are we talking an extra +50bhp faster??? ;)

Yeah that’s what my butt dyno told me 😆

Ahh, it's an official figure then ;)

@originalworks seems to be having quite a difficult time these days dont it ?