Reasons To Post Via Busy.org (Steemit-like Mirror To Steem Blockchain) 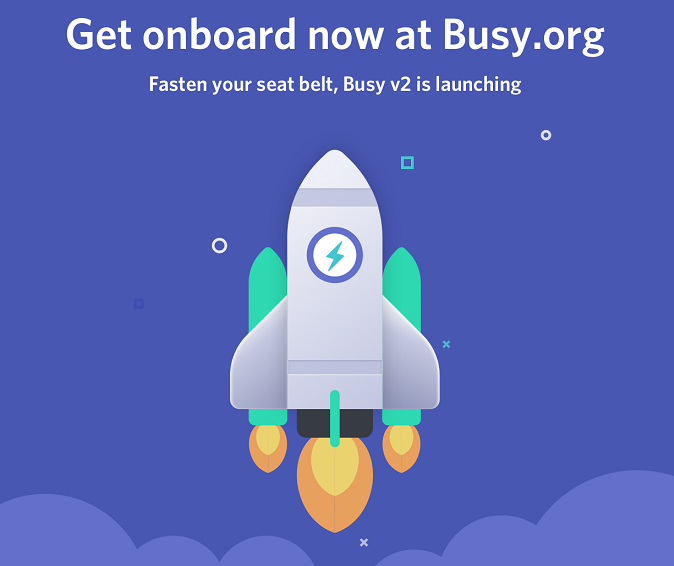 As great as Steemit can be (particularly for browsing, thanks night mode) I actually post the bulk of my posts via the Busy.org website. Busy has a number of nice features that are useful for regularly composing authors. I assumed many of them would be integrated into the Steemit website front-end, but it's clear that the focus on development for STINC is SMTs and not Steemit. As a result, Busy is quickly outpacing Steemit in terms of features and functionality.

Mirrors of Steemit are very handy to have as they serve as a form of "decentralization" for the blogging aspect of Steem(it). If Steemit goes down (the website), other mirrors can still be used to view and interact with the Steem blockchain. This, in turn, reduces the likelihood of DDoS and other attacks on Steemit as they are less effective in the face of viable alternatives.

Competition also good for the end user (us bloggers and readers.) New features implemented by either portal (or other competitors) raise the bar and increase the likelihood of those changes reaching the other platform.

Let's look at the drafts function. This would seem an obvious feature to have on any blogging platform, but it is conspicuously absent from Steemit (replaced only by an autosave that clears any time "Post" is clicked - much less useful.) We've had problems in the past with Steemit eating posts, and I have personally had to re-write a post or two. Things have been stable for awhile, but the drafts function is good insurance and also allows you to setup a blank-template to start each post with. This way, you can include your signature, links, and other data at the bottom of your post, as well as preserve some basic formatting like title headers or post image-centering.

Another clever feature Busy has is the built-in price ticker that (I think) adapts to different price quotes based on the viewed content. It can be seen right above the "recommended posts" widget, which is also periodically handy:

Busy also has a widget with suggested "Interesting People" to follow, and I'd have to say the algorithm is pretty accurate. I've followed a number of interesting people who I already read, but had slipped through my "follow" button cracks from the widget. Another great feature that will probably interest most users with an established blog is the "Busy boost." If you post via Busy.org, and tag your post with Busy (any tag, doesn't need to be first), you'll receive an upvote from Busy.org which can be very large. I'm not sure of the current formula to determine the size of the vote you receive, but it used to be related to how much Steem Power your followers had in total. 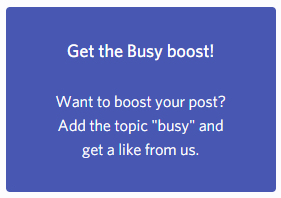 You can only take advantage of this once every 12 hours.

The final feature I'll mention is Busy's advanced filtering for events related to your Steem account. You've got pretty powerful filtering tools here, compared to Steemit, and it often means you don't need to consult outside tools to get the data you want.

Join us at the Minnow Support Project! (click me)
We also have a Radio Station! (click me)
...and a 10,000+ active user Discord Chat Server! (click me)
Almost 80% of Steemians do not vote for witnesses, who secure the Steem blockchain! If you wish to make me your witness voting proxy, I will attempt to vote in Steem's best interest based on the information in my witness reports. You may set me as your proxy by clicking here and scrolling to the bottom of the Witness Voting page. Proxies are instantly revokable at any time, and witness voting does not use your voting power.

The busy boost has been very helpful.

Agreed, it has certainly helped me out in some dry times.

I too like busy mainly because I can keep the new post in draft and come back later for editing and final touch. Also I can save post of others to read later without need to search again.
And another usuful for me feature is when you click on the avatar of the user the picture pop up zoomed and you can see it better.

The drafts function is really my bread and butter.

Time to fully move over to busy

It is certainly a better posting experience.

I just love the notification section

It's startling that nobody included something similar at Steemit.

Thanks for good info! Upvoted

Yes, busy.org has cool features. You will get notified of anything that happens on your blog and it has the filter activities.

I'm regularly surprised that Steemit still hasn't implemented some kind of notification feature. @ notifcations have been off and on forever...

Does busy take a cut of the rewards?

Not as far as I know. I'm not even sure if that is technically possible?

I was just wondering given dtube and I think some of the other ones do. I really don't know.

Ok, word on the MSP street is no, busy does not take a cut.

I have loved using busy since I discovered it a few months ago. Really handy platform for people used to WordPress and things like that

I've seen busy.org come up more and more and just hadn't tried it yet, but it looks quite useful. In your drafts picture it has blank template as an option, can you save templates and reuse them?

That's actually my own blank template I made. I use it each time I start a fresh post and just cut and paste it over to a new draft. I'm not sure if you can set a template without cut and pasting, I haven't tried.

Ahh I gotcha, still an easy way to keep it all together!

I post 90% of my post through busy.org and i love it. But as you mentioned that if we use the tag "busy" then it will give a upvote. In my case there is only 50-60% chances that we will receive a upvote from busy even after using the first tag.
But i still use it.

The reason you don't always get it is probably due to post timing (12 hour limit), and sometimes Busy has to sleep to adjust voting power weight.

May be the case of sleeping. Because I maintain 12 hour timing.

I know Busy can be more promising at writing articles than Steemit. For example they have markdown shortcuts that I can use when formatting, like Ctrl + I for italic, etc.

On the other side, I am not so sure about the busy upvote because recently I just wrote a post in which I have used the tag busy, posted from Busy and did not got any upvote...

You had me at drafts. I've always wondered at the logic of a writing-intensive platform such as Steemit not having that basic functionality.

And keeping a post template is a no-brainer. I had no idea this was available, so clearly, I'll be posting from busy.org from now on. ;-)

I've just started using Busy.org about 4 or 5 days ago and I have to say I'm enjoying it as I find my way around the platform. It is certainly more full featured than Steemit, and as you said, with STINC focused on SMTs I don't think we'll be getting any new UI features on Steemit anytime soon. So, Busy is likely to see increased adoption.

While it isn't a big deal for you, my main motivation for coming over to Busy was the inclusion of the slider, no matter how much SP you have. If you're commenting and voting a lot this becomes invaluable.

One thing I haven't been able to find is something similar to the "Replies" tab in Steemit. Did I just miss this somehow, or is it really not a part of Busy?

Wow thank you very much for this information, I always use the busy tag thought that it was just a label and already but I see that I was wrong, I will try to post from busy.org to see how it goes. ;)

OK, so I tried to sign UP for Busy.org, and it acted as if I were new to the whole STEEM blockchain, which is not the case; as you can see, I already have a Steemit.com account. So I tried signing IN instead, and it threw this dialog box at me: 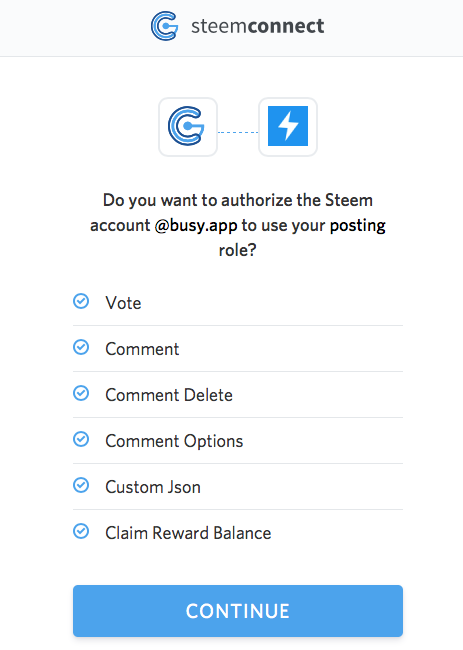 Please help me. What is steemconnect and what is it asking me to authorize? I don't want to sacrifice my "posting role," nor my abilities to vote, comment, and claim rewards! And what is Json?

I was really looking forward to using Busy.org based on what you wrote here, but having techno-legalese auth requests thrown at me right off the bat fills me with suspicion. The site should not be asking laypeople to authorize anything technical that the site's designers are unwilling to explain straight up!

This pushes the edge of user-unfriendly and borders on user-hostile. In my whole STEEM experience this is the first time I've been slammed up against an anti-layperson obstacle such as this. What does it mean, and why wasn't that already explained?

I totally get where that freaked you out. Did me too when I first encountered it.

SteemConnect is a utility that busy.org made in order to be able to perform your blockchain functions like voting etc. You are basically just giving steemconnect the key to allow you to do the normal steemit stuff (vote, comment, etc.)

So, you are not sacrificing your posting role - you are just authorizing yourself to use it on the busy.org site. You can read all about them here https://steemconnect.com/

You find your active key in your wallet - on the second line down you'll see "balance permissions password" click permissions then login to show active key copy paste that to log-in. This won't be the first time you run into steemconnect - other ancillary services use it as well.

Hope I wasn't too confusing and that helps explain. Fellow Steemian - new to the whole thing. FYI -I have no affiliation with busy.org or steemconnect - anyone with affiliation please feel free to correct me.

Thank you very, very much for clearing that up. I feel a lot better having read this!

I like busy a lot but I've never gotten the busy upvote from using the tag. I still use it though because it's a great interface. :) What do you think of the Sugar Steem UI being developed?