Omg!!! See Spirits In The Form Of Humans 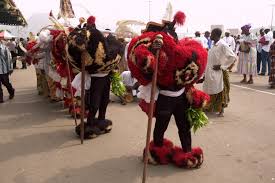 Ekpo Masquerades is a cultural society plays that was originates from the Efik, Ibibio and Annang People in the Cross River/Akwa Ibom land[1][2] the South South Nigeria.
Ekpo Masquerade is one of the oldest institutions in Africa which was known to maintain Law and order in The Society.

The cult was known to originate from spirits of dead ancestors and deities who came back from the spirit world to administer justice to the people in the living world. ,br/>The Ekpo same in meaning as Ekpe, Okpo-owo or Akpo-owo as pronounced by the Efik, Ibibio and Annang people simply describe it as a non-living humans or a death soul that comes the land of the living.[3]

In Akwa Ibom, Ekpo Masquerades is practice by almost all its towns especially during its Festivals at Ikot Ekpene,Etim Ekpo, Oruk Anam and Abak as well as the Annang land[4] and some other places in the Ibibio land.

Today, the 7th of October, 2016, as Nto Annañg Community, Abuja, Nigeria, celebrate Cultural Festival in Abuja, works on Annañg Culture have increased by one following, yet, another publication and presentation of the book “Ekpo Masquerade in Annang Culture”, by two illustrious sons of Annañg land, Ephraim Stephen Akan Essien, PhD and Abom Ephraim Okon, who were born, brought up, nourished and nurtured with the milk from Annañg traditional cultural and philosophical milieu. Granted that Culture as we are made to understand, is the totality of a people’s way of life, culture also needs philosophy in order for it to be truly an intellectual expression of the African spirit. This is what the duo have done. Hence, necessitated this piece. Annañg which occupies the North-West territory of Akwa Ibom State, Nigeria, is both an ethnic group and a language. It is one of the three ethnic groups that make up Akwa Ibom State; others being, Ibibio, the largest, in terms of size and population, and Oro, the third after Annañg, which is second.

Essien, who had earlier in 2011, published a work titled “Annañg Philosophy, History and Culture: An Inquiry into Afrology and Afrophilia”, where he discussed extensively on Annañg people, Geography, Colonial history/population, Annañg Cosmogony and myths of origin, History of the Eight LGAs that make up Annañg land, Annañg Economy, Politics and Culture, Annañg Metaphysics as the Itak (Base) of Annang philosophy, Annañg philosophical anthropology and philosophy of mind, Annañg Religion and Theology, Annañg Epistemology and Logical Reasoning, Annañg Jurisprudence, Philosophy of Law and Legal System, among others, has today, once again, but this time, with his good friend and brother, Abom Ephraim Okon, presented another work on Annañg. It is on Ekpo Masquerade in Annañg Culture. For those who do not know what (Ekpo) Masquerade designates, the question, “What is masquerade”? Can be answered thus: “Ekpo” is the Annang (Ibibio and Efik) word for “Masquerade”. According to the “Ephraims”, ‘Ekpo’ means ‘spirit’. It also means ‘ghost’. Ekpo masquerades symbolize the dead members of the community. The Ekpo Masquerade institution keeps the memory of the dead and their participation in the affairs of the community alive”(85).

The authors maintain further that before public outing and parade, the masquerades in traditional Annañg society, were always preceded by the herald or attendant (akwa ekpo), who would run out and run back rhythmically, shaking his rattle (ekpood) and chanting songs along his way. Greetings, full rendition and meaning of the songs rendered by Ekpo during their outings, are also discussed in the work by the duo. For instance: inyion ekpo ku top irang ku urua oo! Kwok kwok-kwok, kwok! (Cf. Essien & Okon).

The book also points out that the Ekpo Masquerades represent all kinds of persons in the society. They state that in Traditional Annang society of Akwa Ibom State, Nigeria, these are symbolized on the masks they (Masquerade) wear and how they play out their roles when they are on parade. They enumerate them thus:

AFAI EKPO (Wild Masquerade) was a symbol of insanity and madness

AJARA IKPA (The Leather Wearer) was a symbol of the gorgeous in the community.

INYION EKPO (The crippled Masquerade) was a symbol of suffering in the society, and it was always limping when on parade (ibid).

Functionally, ekpo represents ancestral spirits and acts as an intermediary between our world and that of the ancestors. Ekpo also has a social function: DISCIPLINE. It constituted as it were, according to Umoh, ‘a police Force in Annang Traditional Society (A PHILOSOPHER LOOKS AT ANNANG PERSONALITY, 84-85). From the forgoing, it is easily discernible that Masquerades constitute a spiritual tie binding the dead to their living. Ekpo Masquerade which can be serene and beautiful or fierce and frightening, is not bad in itself as may be misconstrued.

While congratulating the authors for displaying great mastery in all the issues raised, I strongly recommend this book to all lovers of (Annañg) Culture.

For more details on Annañg Culture, purchase Essien’s “Annañg Philosophy, History and Culture: An Inquiry into Afrology and Afrophilia” and/or E. Essien and E. Okon’s “Ekpo Masquerade in Annang Culture”, and read. Your culture is your identity. 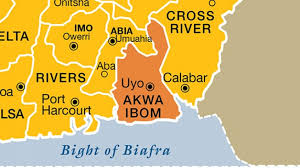 Welcome to the platform. Nice to meet you as well. We happy to have you here!

I am very happy with your presence in Steemit. I wish you the best! Hope you gonna have fun with our community and see you soon.

This blog is a list of the best web apps interconnected to Steem Blockchain. Moreover, any useful feedback on our blog would get back a shared reward. (COMING SOON)

You are cool. Thanks for sharing, hehe. I'm Oatmeal Joey Arnold. You can call me Joey.

Thanks sir am glad to be here

Please take these 2 warnings into consideration and help build a great platform!