Don't believe the mining is not profitable hype. This idea mostly comes from the people who can't do simple math or don't want the mining difficulty to increase. But before we dive into the explanations lets define a few terms...

Coins - Bitcoin is a decentralized digital currency that enables instant payments to anyone, anywhere in the world. Bitcoin uses peer-to-peer technology to operate with no central authority

Ethereum is an open-source, public, blockchain-based distributed computing platform featuring smart contract (scripting) functionality. Ether is a cryptocurrency whose blockchain is generated by the Ethereum platform.

You should refer to https://coinmarketcap.com to get started researching a coin that has your interest.

Bitcoin mining is the process by which transactions are verified and added to the public ledger, known as the blockchain, and also the means through which new bitcoins are released.

Blockchain - a digital ledger in which transactions made in bitcoin or another cryptocurrency are recorded chronologically and publicly.

Wallet - info is a bitcoin cryptocurrency wallet and block explorer service. Launched in August 2011, the service provides data on recent transactions, mined blocks in the bitcoin blockchain, charts on the bitcoin economy, and statistics and resources for developers.

GPU Risers / PCI-E extenders - commonly used in order to be able to put more video cards on a single motherboard and use not only the available PCI Express x16 slots but the smaller x1, x4 and x8 as well that were originally not designed ...

Many of the above definitions are meant to be fundamental and not overly technical. The point is for new people to understand the profitability of mining not to grasp the entire concept in one article.

As I mentioned earlier I will teach you how accurately as possible calculate mining profitability of bitcoin and altcoins. If you are thinking about mining some crypto that everyone has been talking about this is beginner article for you.

So let's dive into it, blockchain technology is designed to be peer-to-peer transaction ledger that is decentralized from any specific party. Same as the concept of a company like Uber or Lyft, both directly connect riders with drivers as blockchain connects transactions of peers. The blockchain is the underlying technology that drives all cryptocurrency. As a miner you are what keeps the blockchain running along with all your peers, it is up to you to confirm and process all transactions.

As an analyst, the one thing I've noticed from YouTubers is the inaccuracy in their profitability calculations. The greater majority will miss use the calculator then tell you "see GPU mining isn't profitable". It's frustrating because people are watching these horrible videos. Whats worse is others are copying and repeating it in their own video with even worse analysis. So what I challenge anyone in the comments below prove me wrong. The first more important step to calculating the profitability of mining is calculating ROI of your hardware. ROI (Return On Investment) is how long it will take you to pay your mining hardware bills back. This step will prevent you from overpaying for hardware just to get into the game. It's like having an appraiser on your house before you but it. You NEVER want to overpay!

As agreed among the truthful miners your ROI should but from a low of 100 days to high of 180 days. Just about anything over 180 days ROI and you just overpaid.

Here is the math: As of today on https://whattomine.com, a GTX 1070 (highly regarded as the best bang for buck card) will generate you $3.60 of crypto per day with Launch price MSRP of $449 (USD). $449/$3.60=125 days ROI. We all understand that now the price of a card has skyrocketed to unreasonable high because everyone wants in but that does not justify overpay for your equipment. With this same card if you pay over 180day*$3.60=$640 you have just been ripped off on your purchase. Now, lets repeat these steps for ASIC miners. If ASIC is so much better then they should fall under the same ROI calculations. At today's price, the S9 Antminer on average is 2,725 USD. Today's Bitcoin Cash returns would be $18.26. So, $2725/$18.26=150days ROI. That isn't too bad, but with ASIC miners you either are going to pay more or you are going to have to wait a few weeks to get your hands on one. Another important thing to note with ASIC they only mine one Algorithm as one the coin tethered to the algo is no longer profitable then you now have a $2725 paperweight. 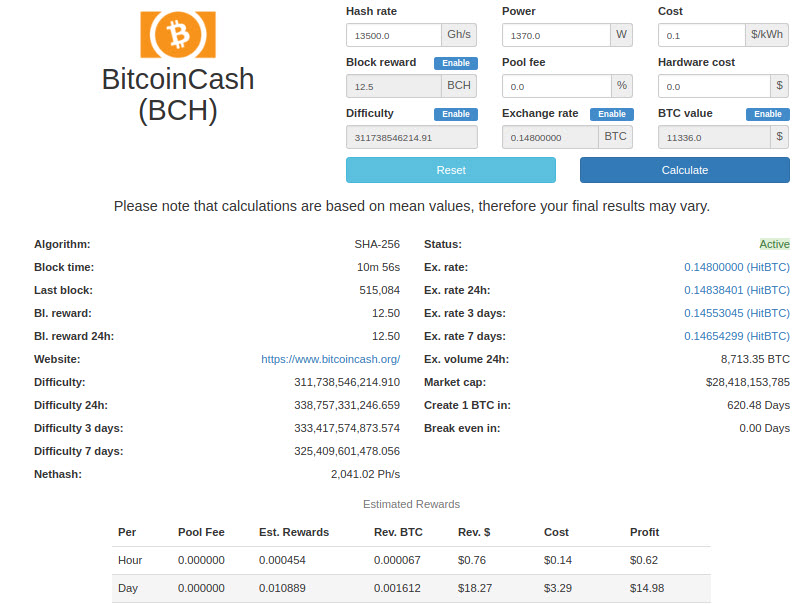 Just to be clear, this isn't the gold standard and things in crypto change daily but ROI is something you should seriously consider. If you have found a way to get your hands one some fair priced hardware check out the few honest Youtube channels left VoskCoin, CryptoCurrency Network and BitsBeTrippin. The listed channels are some that I wish I had watched before I started building my rigs.