Guardiola's "new Iniesta" is the Belgian super kid; once scrapped by Mourinho!

This year in the Premier League the headlights are on Kevin De Bruyne, Man City's midfielder. Pep Guardiola's team is way ahead the table, collecting 31 points out of 33 in 11 games, and the leader of this team is the Belgian guy with red hair and chubby face.

"He can do absolutely everything. With the ball he is in different positions and can assist short and long."

Before they regarded him as a player who mainly fits in counter attack style football only. In the Wolfsburg team that finished 2nd in the Bundesliga in the season of 14/15 he showed what he is really capable of; 10 goals and 20 assists. In that season in many games he was a perfect reflection of modern football's beauty. He was aggressive, fast, ruthless and attacking the goal each time on first intention.

It seemed like he has all circumstances perfect for him to settle in German football, but he really wanted to play in England. He regularly visited relatives in London, who lived nearby Chelsea's stadium and he was a huge Liverpool fan due the influence of his grand dad.

Started his career in Drongen and when he felt it is not enough for him anymore he decided to change and signed for Genk.

He did not have it easy in Genk, he had issues really fitting in the team and in his new environment, when he was placed at a caretaker family, after 10 months they informed the team's management that they no longer would like to have him at their home due to his closed personality.

However despite of the difficulties soon after he started playing for the U21 team where he was assisting a so called Christian Benteke. He was 17 when he debuted at the first team. That was a 3-0 loss to Charleroi. Next season he was a standard player in Hein Vanhaezebrouck's team. Even though Genk changed the manager, Franky Vercauteren arrived replacing Vanhaezebrouck, De Bruyne was irreplaceable at the starting team.
At that time they compared him to Frank Lampard for his shooting power and for his vision, while some (including his previous trainer) called him the new Cruyff. In 2012 Chelsea's scouting team was also convinced that he is an absolute talent and need to be secured; his potential is huge.
Chelsea paid 7 million for him, which was already pocket change at that time for a player of his character. They left him however for 1 more season in Genk, and the following season he went out on loan to Werder Bremen, where he became a leader in the team.
Jürgen Klopp wanted to replace Mario Gotze with him after it was confirmed he is leaving to Bayern. However the Blues did not consider any offer and they did not want to let him go, not even on loan. It seemed like he will be part of a Chelsea team that was being built to conquer the Premier League (Courtois, Azpilicueta, Oscar, Hazard).
That is when Jose Mourinho entered the scene and changed everything. 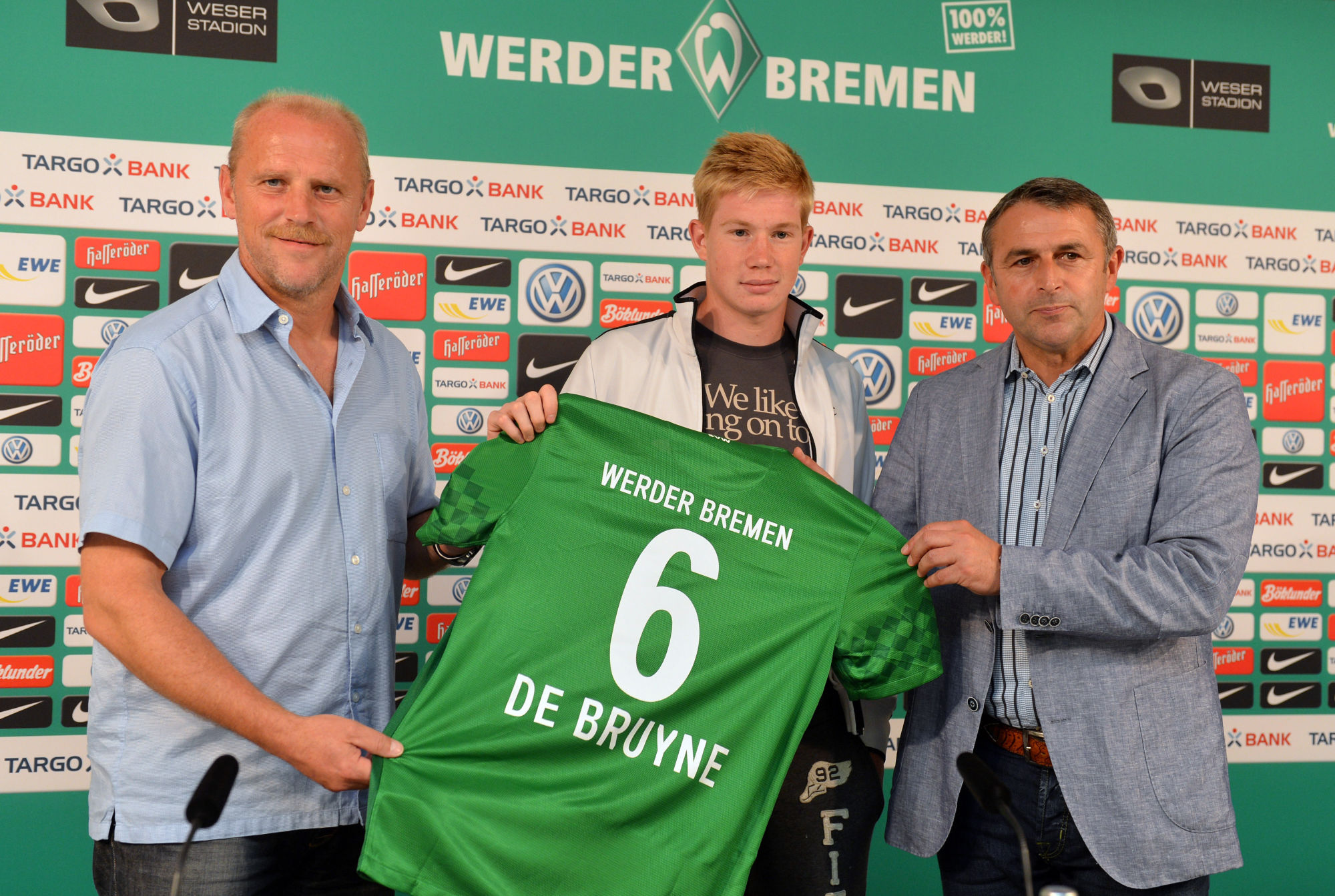 Although he gave him opportunities in his first games at Chelsea once Willian arrived to the club, De Bruyne did not have a spot in the starting eleven anymore and the relationship between him and his trainer turned bad.
Mourinho once called him a crying baby, because De Bruyne was unsatisfied with the lack of opportunities.
Wolfsburg came and paid 18 million pounds for the youngster.

It became clear there that Chelsea made a huge mistake when letting him go. Man City was ready to break the bank for him in 2015 and paid 55 million for the player.
Manuel Pellegrini played him mainly on the right wing but sometimes he had to support the striker from the centre, mainly due to Raheem Sterling.
However he played in the same system as he did in Germany. The question mark appeared when Guardiola arrived. He preferred a different style and formation 4-3-3.

In the first season he got injured and the team lost its initial form by spring.

Now however he plays from his deeper role turning the speed and style of the game around at his will. Long balls, deep cross side balls, straight forward runs and small triangles. In this new role he is the first to get the ball from the defenders and create an impressive link between defence and attack. He is the alpha of attack in his team.

He is already a legend but let's see what the future holds for him and for us enjoying is game.

His performance in the Premier League so far this season in stats: Let me know your comments and your opinion.