Learn to Be a Machiavellian Leader: Beat Your Competitors by Being Cunning 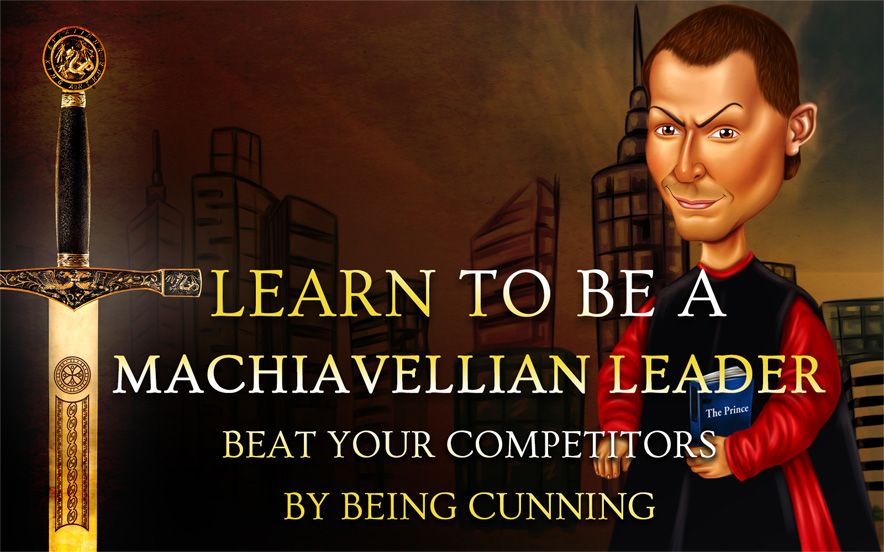 Few historical figures are as divisive and controversial as Niccolo Machiavelli, and despite the fact that this philosophers work is over 500 years old, this hasn’t reduced their impact one bit. Some persons view him as the father of modern materialism which inspires people to do or say anything to achieve personal gain with the end justifying the means. In fact the word Machiavellian, derived from The Prince, his most famous work has come to mean deceit, cunning, and manipulation.

However, others see him as the world’s first realist and one whose principles made a positive influence on modern politics and capitalism. Some are even of the opinion that Machiavelli was the first to apply scientific principles to the study of human behavior by making deductions based on experience, observation, and history.

Regardless of how you see him, one thing is sure, he left a mark in the sands of time, and till today his principles continue to be applied in various spheres of life, especially in everyday psychology, politics, and business. In this blog, we will be critically analyzing some of the principles from Machiavelli’s book, The Prince and seeing how they can be applied in the world of business.

The path to entrepreneurship is no easy one and with the jarring reality that 50% of business fail within the first four years, it is clear that you need something other than the good old ways of doing business. So let’s take a look at ten snippets from Machiavelli’s book, the Prince.

“People should either be caressed or crushed. If you do them minor damage they will get their revenge, but if you cripple them, there is nothing they can do. If you need to injure someone, do it in such a way that you do not have to fear their vengeance.”

Let’s not kid ourselves, the sky might be big enough for all the birds to fly but when it’s crowded, the journey is less pleasurable. Smart entrepreneurs are aware of this fact. It’s always better to enjoy the airspace alone and pleasure in monopoly. To succeed in business, you must cleverly seek ways to thwart the success of your competition. Monopolizing the supply of raw material, buying the competitions resource supply or crashing the price of commodities, especially when you are on top and there’s a good but young competitor behind you is a good way to go about maintaining a monopoly. By employing some smart thinking, you can enjoy monopoly which means more success for you.

By whatever means necessary, crush the competition.

“The lion cannot protect himself from traps, and the fox cannot defend himself from wolves. One must, therefore, be a fox to recognize traps, and a lion to frighten wolves.”

This is a two-pronged principle from Machiavelli. As a business owner, you must not only be strong and smart but be cunning as well, this way; you can withstand any form of attack thrown at you. Often, competition (wolves) comes at you in two ways; directly through beastly attacks or force or by clever traps intended at entangling you.

The lion cannot match a wolf for cunning or the fox match a wolf for brute strength, therefore, a mix of both is needed to survive. The flexibility which comes from having a bit of both trait is the ideal defense in business as every threat you face will come a bit differently, and you need to be prepared, always.

“The first method for estimating the intelligence of a ruler is to look at the men he has around him.”

Weak leaders surround themselves with weak lieutenants. Strong leaders always recruit the best at what they do, and if out of their reach, they look for a way to afford it.

Mediocrity is infectious, and as a smart leader, you must surround yourself with the smartest and brightest brains. In hiring staffs, a leader should not shy away from hiring those as smart or even smarter than him as you not only learn better but this is the true test of management; managing your equals or betters. Only hire the very best, for a general is only as good as his lieutenants.

“It is much safer to be feared than loved because love is preserved by the link of obligation which, owing to the baseness of men, is broken at every opportunity for their advantage; but fear preserves you by a dread of punishment which never fails.”

One grave mistake which most CEOs make is desperately seeking the approval of their employees. When Machiavelli let out the bold phrase “it is much better to be feared than to be loved,” it was a controversial statement, but it applies very well to the modern entrepreneur. This principle is not about creating fear in the minds of your employees but about establishing clear boundaries and aims for them, rather than patronizing them all in an attempt to be ‘loved.’

In fact, there have been studies to this effect as a 2016 study by Personnel Psychology reveals that there is no effect on retention levels whether a manager is perceived to be a good boss or a bad one as on the contrary, workers left both types of managers in equal measure.

“Never attempt to win by force what can be won by deception.”

Brute force is a waste of time and energy. A leader must be able to see threats before they come and deal with them in a manner which is effective yet neat. This way, he not only conserves his energy but maintains his grace and the love of his subordinates.

In many ways, Machiavelli was a pragmatist, so he realized that pursuing a war of attrition earned hate as humans are in his opinion naturally selfish, fickle minded, avaricious and ungrateful and by acting deceptively, a leader reduces the desire for people to seek vengeance.

“Men are driven by two principal impulses, either by love or by fear.”

In leadership, love and fear are the two things which motivate a population towards their leader. In business, one most learn to play on both sources of motivation to achieve the desired goals, and this must always be done at the right moment.

As a leader, you must desire to be loved but never at the expense of being feared because people will easily turn against the ones they love than those they fear.

“He who wishes to be obeyed must know how to command.”

Very few persons possess the incisive eyes to see beyond what is in front of them. Therefore, perception is greater than reality, and as a leader, you must possess the ability to command and do so properly; when you can, you must know enough to fake it.

If you are in a position of leadership and you don’t know how to lead, you will have issues keeping those under you in check. Discipline, experience, and camaraderie help in leadership but you must know how to give commands. Leadership isn’t just about barking orders nor is it about asking people if they would please do something; it is the middle path between both extremes.

Leadership can fail when there is a lack of trust between the leader and the people. It can also break down when erratic, nonsensical or contradictory commands are given. When the business or entrepreneur has no clear goal, failure is unavoidable.

“Men in general judge more from appearances than from reality. All men have eyes, but few have the gift of penetration.”

Perception is key and so is reputation, you must guard both with your life. In business, you must strive to create the illusion of success, not to say you live larger than life and deceptively, rather, you should live and create the impression that you have met your goals. This would not only help keep you on your toes and help you stay striving to reach these goals but it creates an impression on those around you, it makes you look capable and opens doors of opportunities.

This manner of conducting business is risky, but with careful planning, you can easily pull it off especially with well-orchestrated marketing plans.

“Men never do good unless necessity drives them to it; but when they are free to choose and can do just as they please, confusion and disorder become rampant.”

As a leader, you must realize that more often than not, people act in their self-interest, therefore, you must give your employees a sense of belonging or stake in the business venture so they can see a reason to work for you and do so selflessly.

Playing on the need for identity and control which most human’s desire, you can achieve whatever you want. You don’t necessarily have to be in the reins, as long as your interest is being served, you are profiting. One other way to force your employees to act in accordance with your desires is to create a sense of urgency or necessity and you can do this by warning them of dangers (real or imagined) or creating the need for a particular resource which would make them work to meet the goals which give them access to that resource.

“One can say this in general of men: they are ungrateful, disloyal, insincere and deceitful, timid of danger and avid of profit... Love is a bond of obligation that these miserable creatures break whenever it suits them to do so, but fear holds them fast by a dread of punishment that never passes.”

As a boss, you must create a sense of fear in your workplace, not the kind of crippling fear which will leave your employees weak to their knees and unable to function but one which keeps them on their toes always, eager to do your bidding.

In doing this, forgiveness should be abhorred entirely as when those who harm us are forgiven; we undercut those who are loyal. Therefore, an entrepreneur should take the liberty to punish the disobedient as failure to do so undercuts the efforts of the diligent, conscientious members of the team members.

You're right. All this is true when dealing with those who are unconscious, live in fear, ruled by their emotions, easily mind controlled, and do not see the illusion of the trickery. Where there is humiliation involved there is always trickery. The wise are not fooled, and nothing is accomplished by these machinations. The most evolved tool is to raise ones consciousness and leave these manipulations to un-evolved beings who actually think they have power when they really do not.

Nice Article. I upvoted your post. Would You Be Kind Enough To Check Out My Profile And Follow Me? https://steemit.com/@zobaer

You re Awesome @nighttundertaker , please keep sharing such articles