Last Friday I went to my first staff meeting since my employment at the Princeton University Higgins Lab. After 20 minutes of people discussing the usual business, one graduate student brought up the topic of 'The shark tournament'. I thought I must have misheard, a competition for sharks? What?? When she said she was looking for somebody to accompany her this Saturday I figured, 'hey, why not, I have never seen a shark before', and volunteered my assistance.

I had no idea what to expect.

As I said, I have never seen a shark before.. I have never heard of a shark tournament.. and I definitely didn't know what business we, geochemistry lab workers, had there.

The week leading up to the shark tournament, I got some more details.

Hosted by the Star Island Yacht Club in Montauk Long Island, the shark tournament was a fisherman competition in which, crewed personal boats would get two days (Strict Friday 6am-6pm and Saturday 6am-5pm) to catch the heaviest shark for a cash prize. Fisherman typically go 10-30 miles off shore to fish and use a rod and reel to hook and bring in the sharks. The species up for catch are Blue Shark, Thresher Shark, Hammerhead Shark, and Mako Shark. Each species has a minimum qualification weight to be considered in the competition, accompanying a few other rules/methods that the fisherman had to follow for the tournament.

The Star Island Yacht Club has an ongoing agreement with NOAA marine biologists in which, NOAA is allowed to collect any data or samples from the shark body that they want at the tournament. There main study point being the environmental conditions that the shark lived in reflected in bones and tissue.

Through association with the lead scientist with NOAA, the Princeton graduate student got permission to also wait on the docks for the sharks to come in and collect a few samples. Our purpose of study is focused on the calcium isotope composition of old carbonate rocks and, sometimes, old shark tooth fossils. To understand more about how the shark tooth fossils may reflect seawater isotope values, we wanted to collect fresh samples of blood, tissue, and hopefully teeth from shark.

While NOAA was present on Friday, we only came for the Saturday portion of the competition. We left at 6am to get to Montauk at 10am. The fisherman had been out for hours, but it was expected to be several more until any sharks came in.

The first of the day came in at 1:50pm and was a male Thresher shark, weighing 378lbs. We collected blood and muscle from him. The attempt at getting teeth failed as the drill bit we had was not strong enough and the teeth were very small. 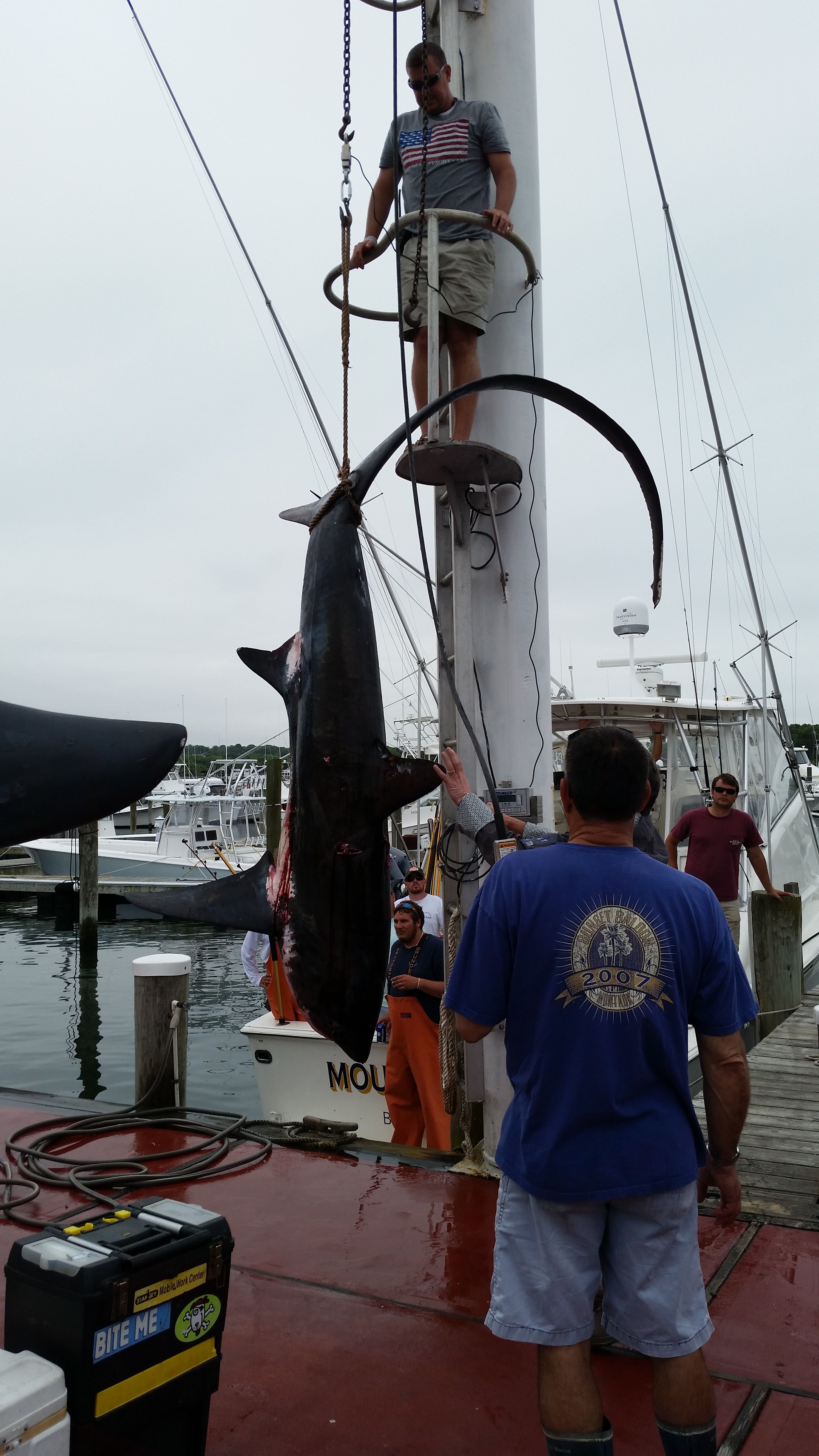 Hours more went by and a large crowd of people of all ages formed. Drinking, smoking, playing in the fool, waiting to see a shark get caught and cut up for themselves (Not the way I'd want to spend a Saturday...) The tournament closed at 5pm, so we all waited in anticipation for more shark to come in.

Finally at 4:30pm a crew came to the dock with a female Mako, weighing 430lbs. We were able to get blood and muscle again but, the crew wanted to keep the jaw bone so we were not able to collect teeth. Quickly followed by a 180lb female Blue. The Blue did not weigh enough to qualify for the competition. The wound from the hook was such that we could not collect blood and, again the crew wanted to jaw so we could not collect teeth so, therefore, did not see point in collecting muscle. 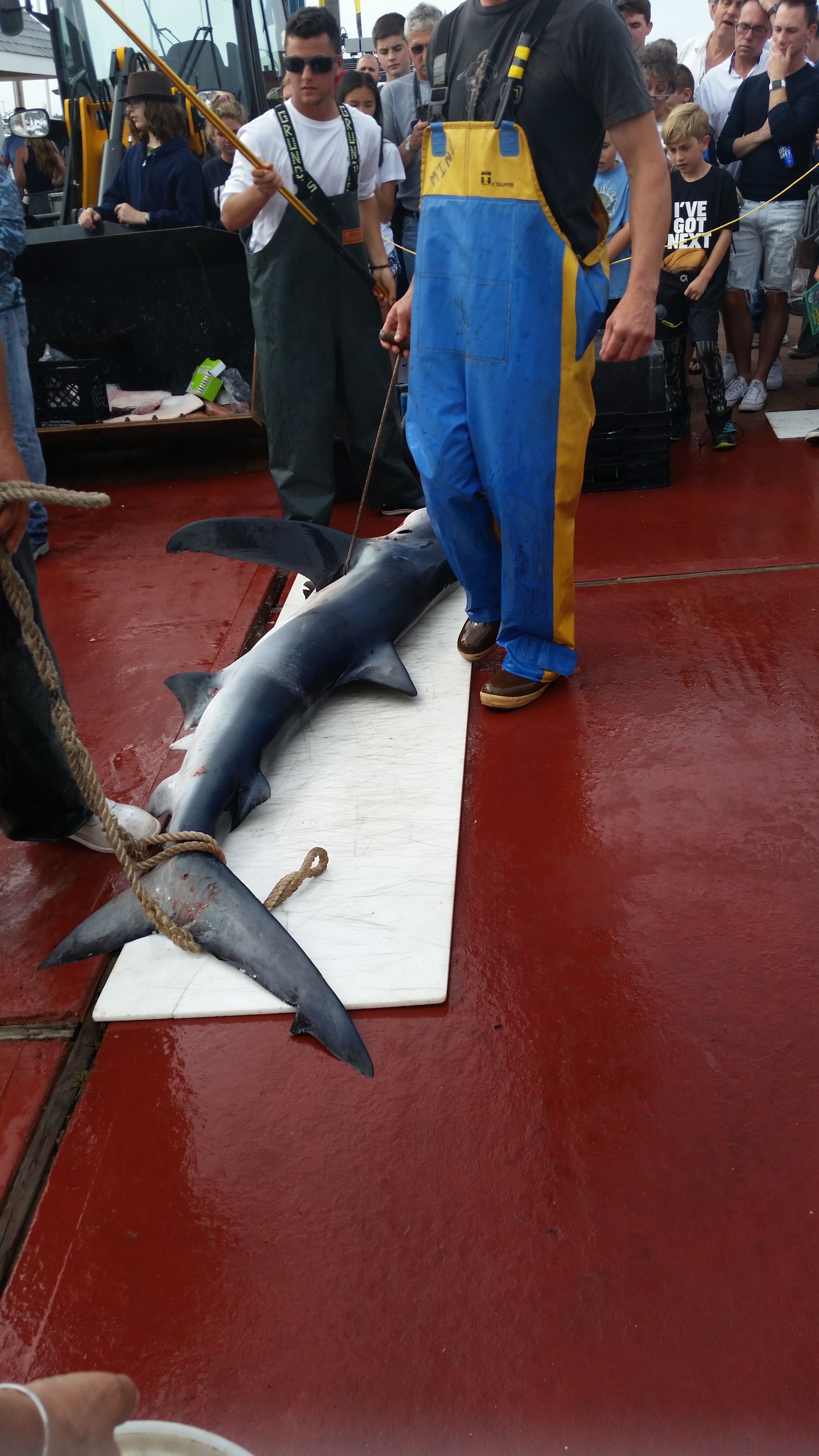 It was an experience I am glad I had, something I never thought I would see. I was not squeamish about seeing or even touching the dead sharks as I knew we were collecting valuable samples and that hunting is a sport many enjoy. Actually, what gave me some chills was the reaction of the crowd! They watched with such excitement for these shark to be killed and dissected even though they had no personal attachment to the project (fisherman or scientist). The announcer would even take the fin and the heart of each shark around for everybody to see, "Im going to put this on the roof of my car". Very barbaric.

Anyway, much was learned on that day in Montauk during my own shark week.

Wow, that's quite an opportunity! I am relieved to read that your purpose was for furthering the study of sharks. At first glance I thought this was just a write-up from the point of view of sports fisherman. I was trying to think of a tactful way of saying I didn't approve of killing sharks for sport, etc. etc. I also hadn't realized Princeton had a lab that studied sharks. It sounds like a wonderful career. I hope you get to have more of these spontaneous marine opportunities and will share them with us.

Thank you for your good post. I am very pleased to read good posts in feeds.

Im pleased to see that somebody actually reads posts! Thanks