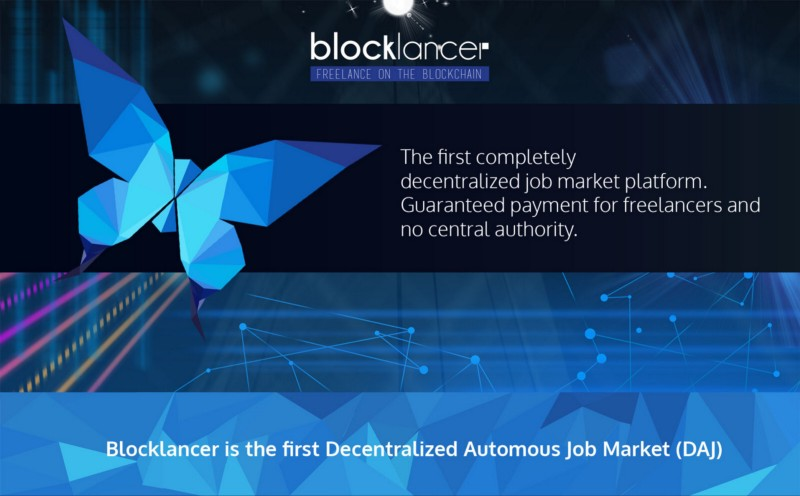 Blocklancer is a blockchain-based platform designed to change the way the freelancing industry works. Read our Blocklancer review today to find out more.

Blocklancer is a distributed autonomous job market, or DAJ, built on the https://bitcoinexchangeguide.com/ethereum/. The platform aims to be a completely self-regulatory platform for finding jobs and completing projects. Overall, Blocklancer wants to change the way freelancing works — both for customers and for freelancers.

In fact, Blocklancer claims to solve “all problems of current freelancer platforms”. It ensures 100% guaranteed payments, for example, and fair and automated dispute settling. It also advertises low fees, no censorship, and all of the benefits we associate with https://bitcoinexchangeguide.com/blockchain-distributed-ledger-technology/ — like an immutable, transparent ledger of transactions.

Blocklancer is preparing for its ICO in August 2017, when it will release Lancer tokens (LCN) representing shares in the company.
Overall, Blocklancer wants to bring blockchain-based disruption to an industry that sorely needs it. Today, the online freelancing industry — led by giants like Freelancer.com and Upwork.com — is riddled with excessive fees. Upwork charges freelancers fees of 20%, for example, along with a 3% fee for employers. In comparison, Blocklancer plans to charge just one single fee: a 3% fee for freelancers.

How Does Blocklancer Work?

Overall, Blocklancer is a freelancing platform built on the blockchain. It’s a distributed autonomous job market that’s designed to be self-regulatory while providing a safe, secure, and efficient environment in which employers and freelancers can operate.

Freelancers can find jobs easily — even if they have no blockchain experience. Freelancers are able to search for jobs on the platform, or build their reputation as a freelancer and get contacted directly by customers requesting your expertise. The platform is designed to be simple and easy-to-use, regardless of your technical experience or blockchain knowledge. What Problems Does Blocklancer Seek to Solve?

Today’s freelancing industry is filled with problems. Some of the problems include:

Blocklancer plans to solve all of these problems by building a feature-rich, easy-to-use system on the blockchain.

Blocklancer advertises all of the following features:

With Blocklancer, you only have to pay if you are 100% satisfied with the work, or if certain milestones are reached. In the case of a dispute, token holders will decide. This means you’ll never encounter unilateral decisions by a biased authority and unfair money loss — say, when PayPal always sides with buyers and leaves sellers out to dry.

Instead of depending on a single authority to settle disputes, Blocklancer has a concept called token holder tribunals (THTs), where the decision lies in the hands of thousands of token holders to guarantee a fair decision.

Blocklancer charges a rate of 3% per job, which they claim is several times lower than the amount charged by other freelancing websites. As the Blocklancer website explains, “Freelancing will finally be a lucrative way of earning money — and reliable as well.” For comparison, Freelancer.com charges a 10% fee (in addition to a 3% fee for clients), while Upwork charges a 20% fee (in addition to a 2.75% fee). These platforms also charge fees for money withdrawal (including fees as high as 2.75% on Freelancer.com), while Blocklancer withdraws money immediately into your Ethereum wallet.

Other freelancing websites might censor users or job postings for various reasons. That doesn’t happen on Blocklancer, where all job offers are recorded on the incorruptible, immutable blockchain. Political correctness and personal feelings won’t play a role in removing Blocklancer from the blockchain: if a job is posted on the platform, it will remain on the platform.

Blocklancer will issue an ICO in August 2017. During the ICO, they’ll release shares in the company in the form of Lancer tokens. Lancer token holders are entitled to a certain percentage of Blocklancer’s revenue. In fact, 100% of the fees earned from jobs on the Blocklancer platform will be distributed among token holders. Token holders also play a crucial role in keeping Blocklancer running: they participate in token holder tribunals, where they settle disputes between customers and freelancers.

Blocklancer is made in Austria. The company is led by CEO, CTO, and Founder Michael Kaiser, a businessperson and computer scientist with experience developing on the blockchain. Other key members of the team include Sabrina Kaiser, COO and Founder, as well as Kevin Kaiser, CTO And Founder. The three members of the executive team appear to be siblings. And yes, both Kevin and Michael are listed as CTOs.

You can contact the development team by email at [email protected]

Blocklancer aims to introduce blockchain technology to another industry that sorely needs to be disrupted: the online freelancing industry. Today, freelancing platforms like Freelancer.com charge enormous fees to both clients and freelancers. Blocklancer sees an opportunity to use blockchain technology to facilitate lower costs, better transparency, and a more efficient freelancing experience overall. They also plan to use a unique token holder tribunal system to solve disputes in a reasonable way — so instead of automatically siding with the seller in every dispute, Blocklancer considers each dispute on a case-by-case basis.

The platform is being developed by a team of Austrian siblings. You can learn more about the project at Blocklancer.net. Watch for the Blocklancer ICO to appear online in August 2017.

For more information visit us on http://www.blocklancer.net