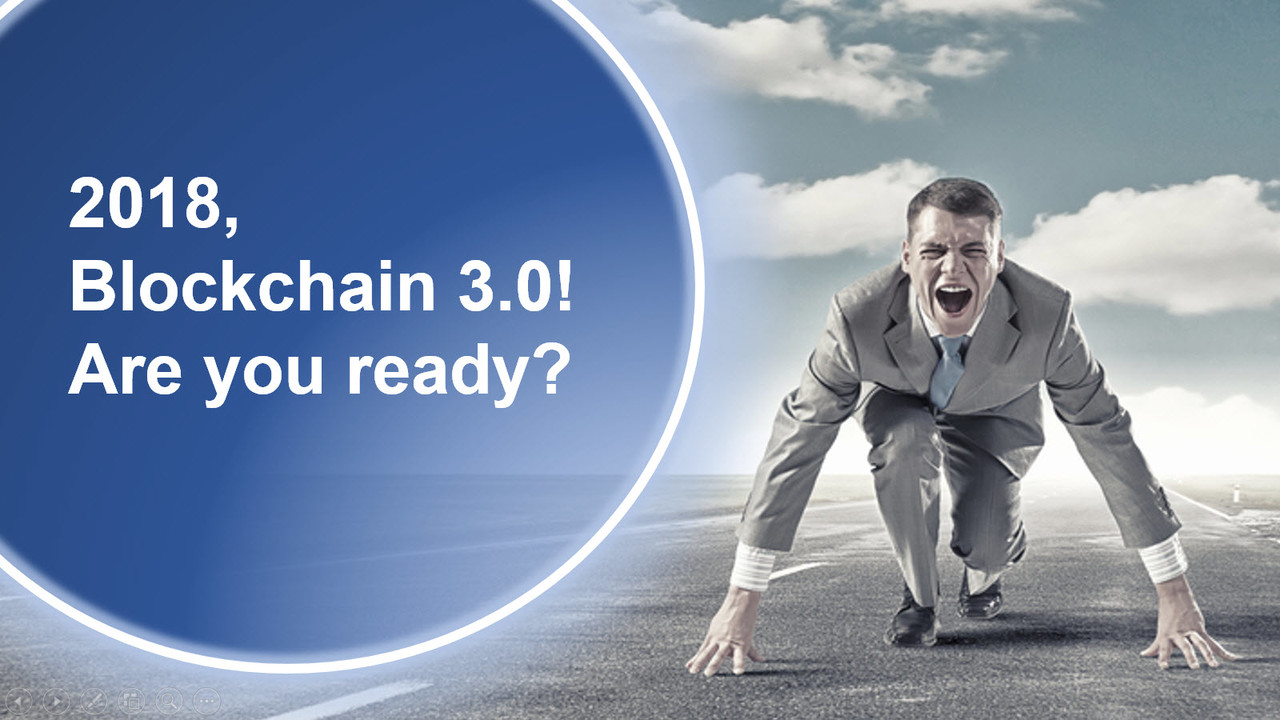 In one of my previous articles “Which Blockchain Technology is the right one for my company?” I talked about the maturity level of the blockchain, stating that the technology is still experimental and hasn’t yet reached the level of maturity needed for being extensively adopted. Currently, both generation of blockchains, the blockchain 1.0 (Bitcoin) and the blockchain 2.0 (Ethereum), are not able to provide the level of performances required by the industries. One of the major issues is how to increase the number of transaction per seconds (TPS), keeping up the unmatched level of security and decentralization that makes this technology so unique, disruptive of the status-quo and capable of transforming our society and most of the current business models.

On the other hand, the expectations and potentialities of this technology in transforming our business models and our society are such enormous that we can be considered the blockchain as the 4th revolution of the information technology era, after the advent of the PC, the Internet and the Social Media. The investments in this technology are enormous, also thanks to the ICOs (initial coin offerings) that have almost entirely replaced, within just a few months, the traditional source of financing from venture capital. In the future, almost everything will run on a “general-purpose,” decentralized, blockchain-like platforms. And this could happen earlier than expected.

We must acknowledge that the innovation speed of the blockchain technology is amazingly faster compared to all the other “traditional” IT technologies so that the developments previously requiring years are now happening in months or weeks. 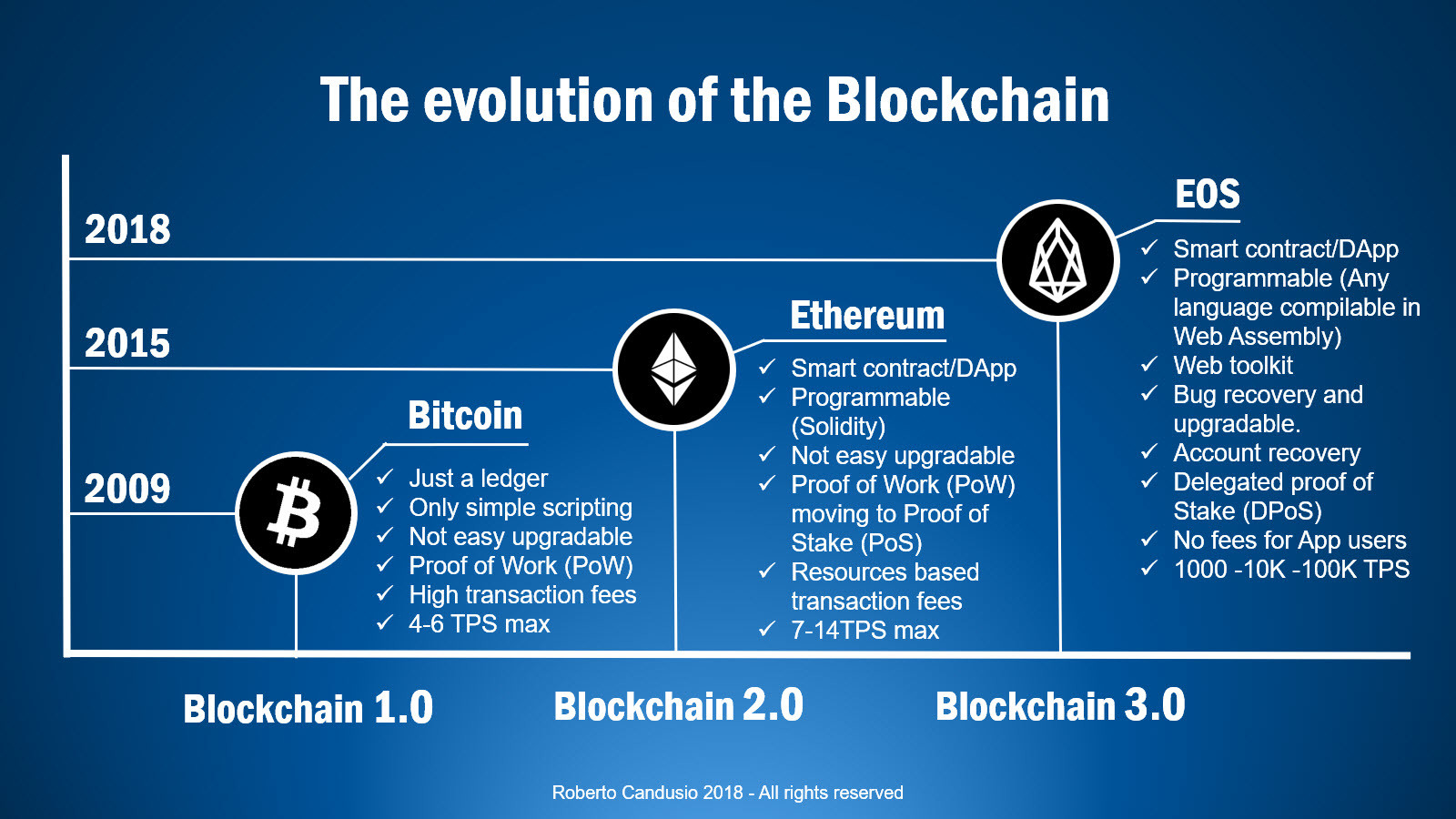 In my opinion, among all, the above projects, EOS is by far one of the most promising one.

The development of EOS is led by Daniel Larimer who is a very well-known developer in the crypto space for having created two successful projects like Steemit and BitShares. It is impressive to know that Steemit and BitShares together are running more transactions on a daily basis than the Bitcoin and Ethereum together.

It is remarkable that the EOS development team was able to keep the schedule of each milestone of the project, and they are now going to release the software on the main net in June 2018.

EOS is the first blockchain operating system. It is packed with all the core features allowing the developers to focus just on the business logic, without having to struggle in building the databases, the authentication and permissions, the scheduling and the internet-application communication, among others. Moreover, EOS promises to solve the scalability, usability flexibility and governance issues that are currently obstruction the mass adoption of this technology. In fact, EOS can run in parallel, thousands of applications each supporting high volume transaction per seconds. It allows to freeze broken apps and be upgraded without hard forks or impacting the existing application running on the network. EOS doesn’t require the end-users to pay fees. Developers can build their apps using any language provided that can be compiled in Web Assembly, and they can quickly develop the application interface using a web toolkit.

It is definitively too early for predicting that EOS is the general-purpose blockchain platform everyone is waiting for, but for the time being, the comparison between Ethereum and EOS seems to have, from any standpoint, a clear winner: EOS.

Ethereum is also evolving toward the Blockchain 3.0
But also, the main exponents of previous blockchain generations like Bitcoin and Ethereum are actively working on improving their solutions.

Ethereum, for example, is progressively moving from the Proof of Work (PoW) to the Proof of State (PoS) consensus mechanism, as part of the new release called “Casper.” Moreover, the Casper release includes the upcoming “sharding” mechanism, which will make possible for the Ethereum to gain a higher throughput. In fact, the current problem is that in Ethereum every single node in the network must process every transaction. With the sharding mechanism, the blockchain is split into partitions (shards), each of which can process independent set of operations. Many blockchains platforms, including Ethereum and Bitcoin, are working on the off-chain parallelization of specific operation to improve the throughput and reduce the transaction costs.

Are you ready to start?
In conclusion; I firmly believe that during the second half of 2018, we will assist closing of the gaps between the promise and the reality in the blockchain technology!

The “wait and see” approach adopted by many companies until today is becoming too risky, considering that any company, small or large, that will lose the train of the blockchain technology will be condemned to downsize itself or disappear forever.

The information and views set out in this article are the author's personal opinions and should not be interpreted under any circumstances as financial advice.

Submit
$0.03
4 votes
3
Authors get paid when people like you upvote their post.If you enjoyed what you read here, create your account today and start earning FREE STEEM!
Sort Order:
[-]
introduce.bot (63)  ·  2 years ago

Congratulations @techsruptive! You have completed some achievement on Steemit and have been rewarded with new badge(s) :