Your future written in the cards…

In the game development philosophy of SKARA, the player is always at the center.

That means more than involving players in the game development process. Once the game is made, the players should be the ones that determine the course of the game’s future.

It’s no easy task. How can one game give control to so many players?

There’s nothing like a good challenge to get a game designer excited.

“We spent a long time to arrive at the final version of our idea,” says Pablo Rodriguez, CEO and chief creative force behind the SKARA Universe. “Some ideas come like bolts of lightning--they come quick--and others are more like canyons, they require time to take shape... Our idea to make a game for leagues built on cards that real players created through gameplay ended up being a bit of both.”

Rodriguez explained how the idea works. 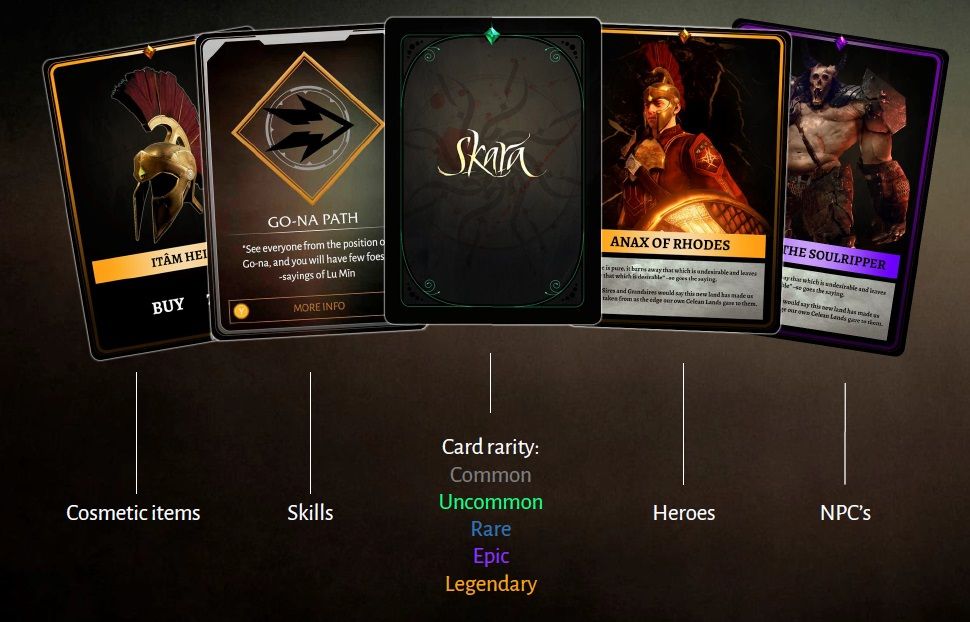 “Every player creates a character, who simultaneously becomes a card,” he said. “The better you play, the better your card is and the more players can use it in their card games.”

Although the card game is meant to accompany the third person action of SKARA--functioning as a way to spend time waiting for matches or to play during some spare time, Rodriguez anticipates that its popularity may even eclipse the main multiplayer.

“It will be something to collect your friends’ cards, watching some of them become ‘pros’” he said.

Only the very best players can achieve legendary status--rendering their cards collectible by everyone for as long as SKARA the game lasts.

The cards may even attract value in terms of the new premium currency Skara is issuing based on cryptocurrency.

“Player cards will become assets, just like special weapons and armors will,” said Rodriguez. “For some that won’t mean much, but others it could create a big economic opportunity--which we are happy to have as long as it is fair and controlled.”

The opportunity is not a joke. Fantasy Football in the US was worth $18.6 billion in 2015.

By opening up the market for peer to peer trading, that profit potential will go largely to players.

“The certainly possible a lot of people will make money playing,” says Rodriguez. “But in the end it’s all about how much fun they are having. If the players have fun, the game is a success.”

Rodriguez says the best part for him will be seeing players change the game’s story, which is taking the form of a series of novels--the first one debuts January 23, 2018.

“Unfortunately not everyone who plays Skara can make an appearance in the novel,” he said. “But at least they can get a taste of glory in the card game.”