scottermonkey (61)in #blockchain • 3 years ago (edited)

Right now is a magical time!

Innovation seems to be accelerating! In a mere fifty years, Neil Armstrong walked on the moon, Matt Damon went to Mars, scientists cloned dinosaurs and made a documentary about it called "Jurassic Park," the Internet was born, and now a rethinking of human interaction.

What if we are finding our way "back" to something like being part of tribes? But instead of "back," it's UPWARD to something more nurturing and challenging than either the current way or the old tribal way?

Before we dive in, let’s answer the question everyone has on their minds. How can we have unlimited pizza while living forever with young healthy bodies? I kid! That's a different story. What I meant to say is: How will dApps affect you?

Is your interest piqued? Wanna know more? Tell me all your passwords.

Let's begin by understanding what a decentralized app is

In a nutshell, decentralized applications (dApps) are pretty much incorruptible, unhackable, and require no condoms to keep you safe. As you will see by the examples below, dApps often provide a solution to a service that previously suffered from requiring a "middle man". Think lawyers, bankers, used car dealers, currency traders, bond traders, stock brokers, escrow agents, et al. 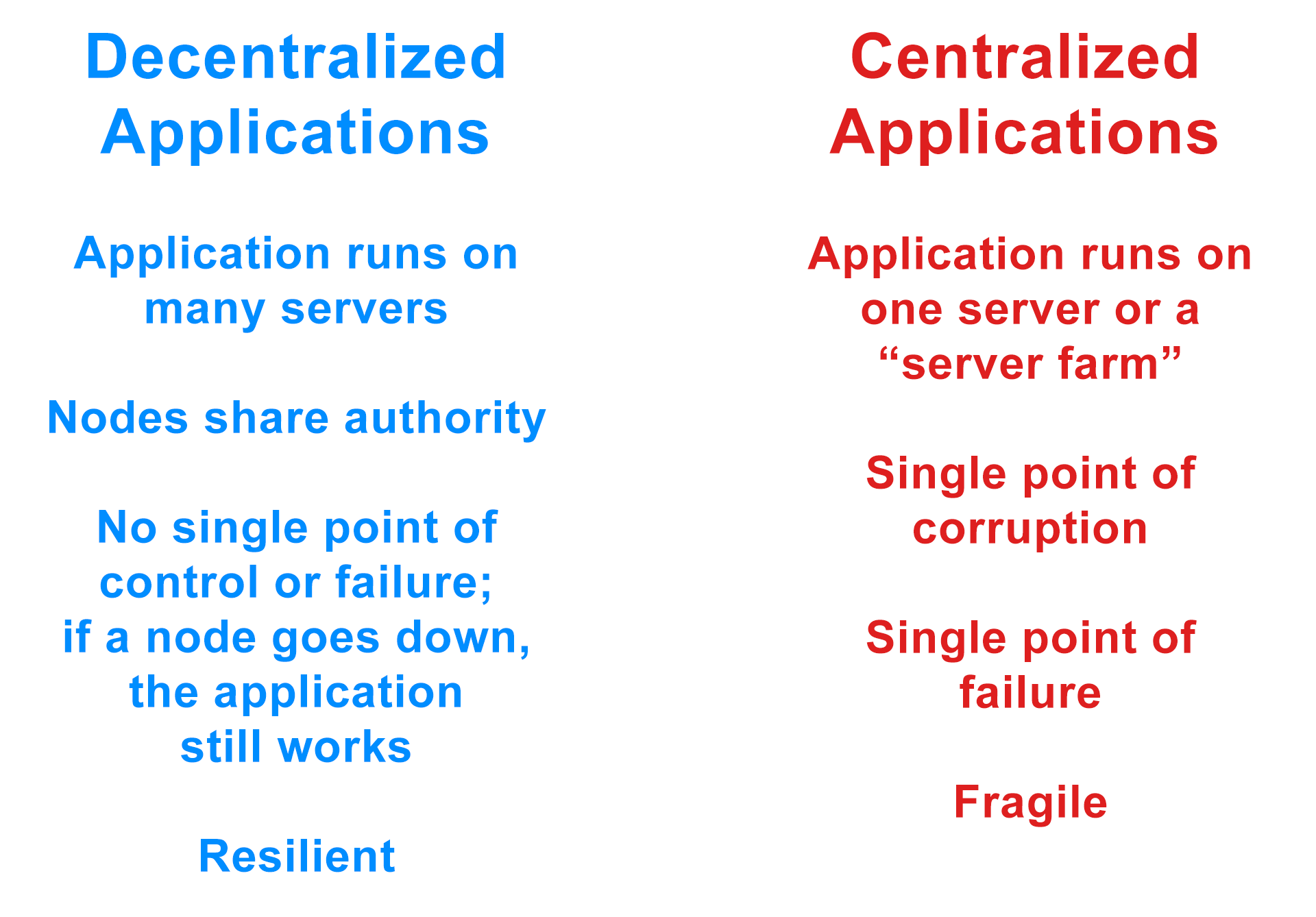 Here are some pretty pictures showing some ways smart contracts will be used and how they work: 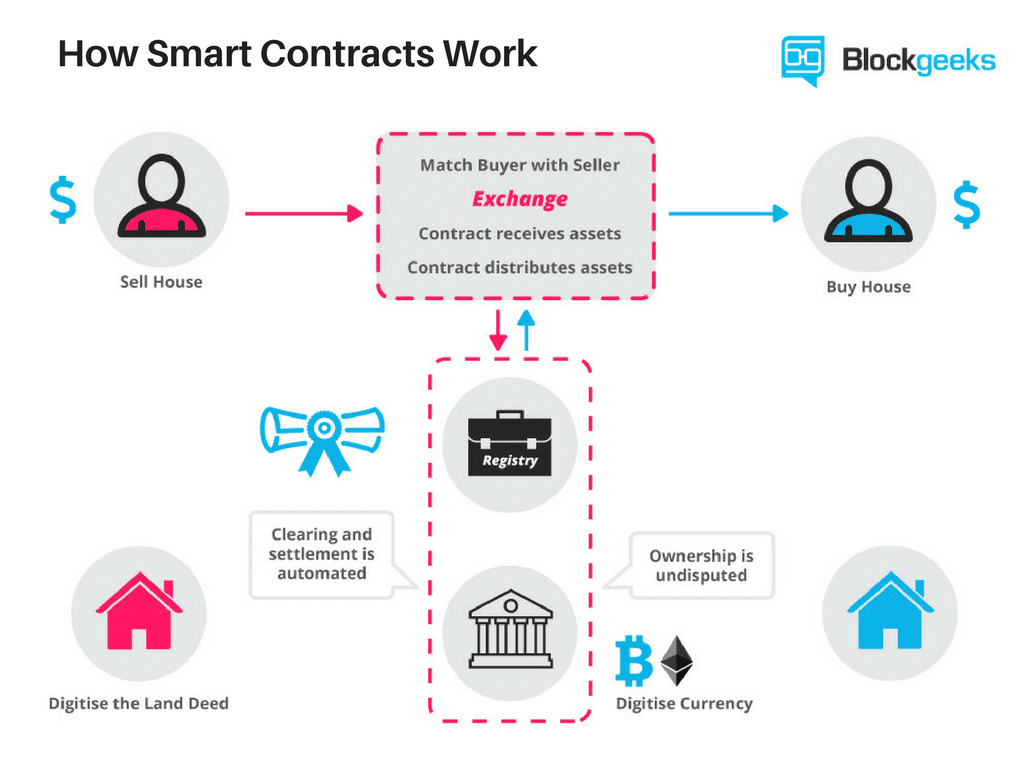 Now that you see a few of the gazillion ways dApps can be useful, let's zoom out and talk big picture for a moment. Not that far out, silly. Let's focus on Earth for the moment.

Speaking of Earth, how will the rise of decentralized applications change your world?

I'll start by expanding on the short answers given at the start of this article. Then I'll relate those items to how these technologies will help you and - by extension - humanity.

One example of corruption seen in the financial system of any Country sporting a central bank: The Federal Reserve prints money and loans it out at super low interest to banks owned by their buddies. This causes the value of the currency to drop. This affects the entire economy in various negative ways, including destruction of savings and incentive to be in debt. That system could no longer work in the cryptocurrency world because no one entity has sole control over the currency.

With the only "middle man" being software that is fast and predictable, we remove the cost in time added to any process when humans are involved.

Blockchains are not hackable, primarily because they exist simultaneously in so many places. Take one down or corrupt it and the network will immediately know that corrupted ledger doesn't match the 28,500 other ledgers that do match each other.

Decrease in cost of services.

Because of the added efficiency mentioned above, a computer doing calculations is usually quite a bit cheaper than the time of a human.

Maybe we'll finally get our sex robots and flying cars? I'll be satisfied for now with a car that drives itself and even runs around town giving people rides, earning me money when I am not using the car. The sex robots? I'm not sold on that yet but I can see it being a very useful and popular item. Not even going to talk about a.i. in this article :-)

Let's back up a tad and tie these ideas together. I mean, if you are done staring at those robotic nipples above.

It starts with economics

Decentralization tends to drive down cost while driving up quality. The rich will get richer. And. The poor will get richer! "Poor" will come to mean someone who has to work 3 hours a day to afford a house most of us would drool over nowadays, sex robots, and yearly vacations to hang out with Matt Damon on Mars.

Before "blockchain" became a mainstream word, we were already seeing the disruptive and positive results of decentralization. Think Uber, Lyft, AirBnB, Torrenting, Craigslist, Ebay, Zappos, open source software, and even your brain.

Brain what? OK. Sure, your body is centrally controlled by your brain. However, the brain itself is a network of neurons. While the loss of certain parts of the brain will cause loss of specific functions like appreciation for Rick & Morty, it is possible for the brain to rewire itself as it learns new things. Conclusion for reals this time

Right now is a magical time! Innovation is accelerating! In a mere fifty years, Neil Armstrong walked on the moon, Matt Damon went to Mars, you are feeling deja vu, scientists cloned dinosaurs and made a documentary about it called "Jurassic Park," the home computer was invented by Al Gore, the Internet was born, Phillip K. Dick wrote books, and now a rethinking of human interaction using - for now - technology as the tool.

About that last part. Is it obvious that I mean blockchain tech?

What decentralized applications do YOU see coming?

Interesting read. Will be interesting to see where blockchain tech will take us in just a few years.

Congratulations! This post has been upvoted from the communal account, @minnowsupport, by ScotterMonkey from the Minnow Support Project. It's a witness project run by aggroed, ausbitbank, teamsteem, theprophet0, someguy123, neoxian, followbtcnews, and netuoso. The goal is to help Steemit grow by supporting Minnows. Please find us at the Peace, Abundance, and Liberty Network (PALnet) Discord Channel. It's a completely public and open space to all members of the Steemit community who voluntarily choose to be there.