The Governance of Blockchains

A glimpse into governance structures the world has never seen before

Blockchains are generally hard to relate to for non-engineers. But governance is something that a larger group of people can relate to. We are all part of companies or countries that have traditional governance structures with centralized decision makers who directly impact our lives. The governance of blockchains may prove to be as important as the computer science and economics of blockchains and it’s important that we broaden the discussion about it.

A blockchain establishes a new paradigm in governance

Governance in cryptocurrencies relates to decisions about two things: the rules of the protocol (the code) and the incentives the network is based on (the economics).

Centralization of governance can have benefits (fast execution, reduced conflict, accountability, etc.), but it can also present problems (weak security, easily susceptible to abuses of power, lack of transparency, etc.). Until Satoshi Nakamoto’s breakthrough in 2009, there had not been any successful attempts to build communities that agree on rules and incentives without relying on central organization. Thanks to Satoshi, we’re now seeing it in the wild with Bitcoin.

Is Bitcoin governance a feature or a bug?

Since 2009, Bitcoin has been the most reliable and secure financial network in the world. While the reliability and security have increased over time, the governance is one area where some see room for improvement.

Bitcoin is structured as a tricameral system with checks and balances between three different constituencies: developers, miners and users. All changes to the code and economics of Bitcoin need participation by all three constituencies to be implemented. Developers write the software that runs on the the protocol, but miners and users must vote for the software by running it themselves. Satoshi has disappeared, so there’s no benevolent dictator for the Bitcoin community to look to for guidance on decisions about the rules of the protocol. Given the tricameral structure and lack of a benevolent dictator, no person or group in Bitcoin has significant influence on the developers, users and miners. This helps explain why Bitcoin has not made protocol changes like improving scalability, which has been a lingering source of conflict in the community for the past year and a half. Despite the Bitcoin Core development team coming up with Segwit, a solution to scalability, the miners have not shown a strong willingness to approve this change to date (see Segwit adoption here — 95% of nodes need to approve this change in order for it to be enabled).

Some view Bitcoin’s governance structure as a positive given that it helps ensure a culture of security, makes the blockchain [antifragile]https://en.wikipedia.org/wiki/Antifragile) and allows it to gain trust over time with reliability. Others view it as a negative given that it makes the protocol slow to adapt and improve and also does not empower users to have much choice about decisions. I don’t have a strong view and think it’s generally too early to say for sure, but am glad to see experiments like Ethereum and Tezos, which seek to maintain the benefits of Bitcoin while eliminating the drawbacks.

Ethereum’s governance is similar to Bitcoin in that it uses proof-of-work mining to reach consensus (for now — the plan is to eventually switch to proof-of-stake) and a tricameral structure that requires a proposal from developers and approval from users and miners. But the difference is the project is led by Vitalik Buterin, an active leader the community looks to on important protocol and economic decisions. 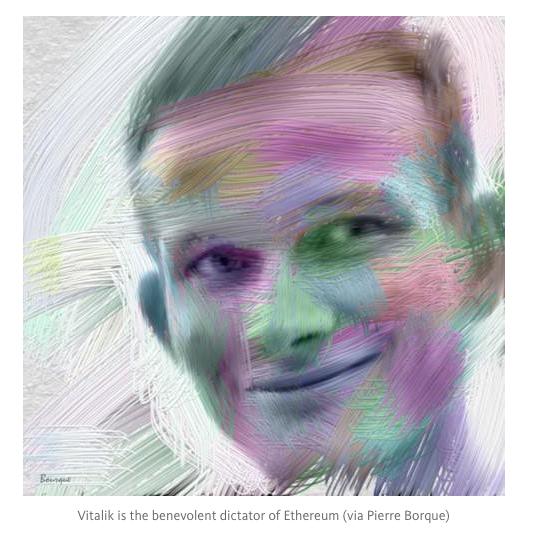 In the case of last year’s Ethereum hard fork, Vitalik championed it and the miners and users approved it. There was a small segment of the community that disagreed with the changes that Vitalik and the Ethereum Foundation championed; they split off to create a new blockchain and community called Ethereum Classic. But the vast majority of developers, miners and chose to reverse the DAO hack and stay on the chain led by Vitalik and the Ethereum Foundation.

So far, Ethereum has successfully executed a “move fast and break things” culture led by Vitalik, though it’s still quite early and it remains to be seen if the benefits of a benevolent dictator will outweigh the drawbacks.

Building on what has been learned about blockchain governance to date

While Bitcoin and Ethereum are more decentralized than anything before and both blockchains are live and battle-tested, they both resemble traditional governance structures in that much of the decision making process is not explicit and efficient and users aren’t completely empowered. Improvements can and will be made, but it’s unlikely for either to drastically change their approach. The governance of both is already set in stone and both projects are already worth billions of dollars

Tezos is one of the most promising governance projects

That opens up an opportunity for other blockchains that improve on governance by putting in place an explicit and efficient process for evolving the protocol and empowering users to participate in the decision making process. One such project is Tezos, which is led by Arthur and Kathleen Breitman. Tezos has been in the works since 2014 when the original position paper was published. It is not live yet but is planned to be in the coming months. The basic idea of Tezos is to create an amendable ledger that enables users to vote on protocol changes directly (and assign votes if users choose to do that). This is a project worth paying attention to — empowering users further and putting clear processes in place on how to upgrade is the future of blockchain governance.

To learn more about blockchain governance, check out the following resources: About me: I run The Control and am an investor at Runa Capital, an early stage venture fund. Previously, I worked on business development and marketing at Coinbase. Follow me on Twitter, signup for our newsletter, and support us by upvoting below.