mindsportsio (55)in #blockchain • 3 years ago 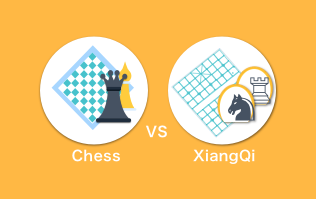 Discussion and comparison between the two is often a popular topic. Chess and Chinese Chess are different in terms of moves and rules, but the two games share similar structure — which is to grasp the spatial relationship. Although the complexity of both games can be subjective. We can review the technicality of the game by comparing the points that pieces can land on. By determining the results with game-tree decision, Xiangqi is approximately 10¹⁵⁰ whereas International Chess is 10¹²⁰, making Xiangqi more complex.
In both games, the goal is to capture the opposing King.

However, here are the noticeable differences: One of the most tangible and visible distinctions between international chess and XiangQi is found on the physical manifestation of the board. The addition of the boundary of the Chu and Han River on the middle of the board in XiangQi allows the promotion and limitation of certain pieces in their movement after they have crossed the “river”. Another material difference is the location of the pieces in relation to the board itself. Chess is played on a checkered 8x8 grid with pieces placed inside a square, XiangQi consists of a board of 9 lines wide and 10 lines long, with pieces placed on the intersections of the lines. Also, in XiangQi, there is the demarcation of a “palace”, which is the boundary where the moves of the king and guards cannot overpass. The general principle is to create opportunities in which the player puts the opponent in a situation of zugzwang, forcing him to move to a slightly more disadvantageous position. 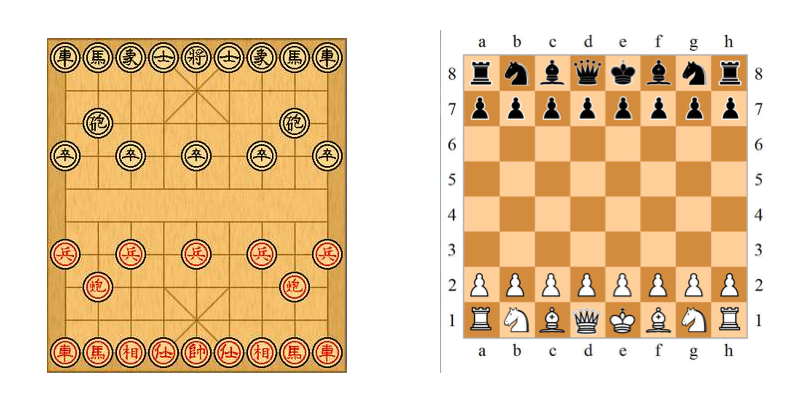 King: only moves one square horizontally or vertically, being restricted to the nine blocks of the “palace”
Guards: moves one square diagonally, limited to the palace as the king is
Elephants: moves two squares diagonally, but cannot jump over pieces; cannot cross the river boundary
Knight: moves one square vertically or horizontally, then another square diagonally; cannot jump over pieces
Chariot: moves an unlimited number of spaces either vertically or horizontally
Pawns: moves one space forward only and never move backwards, but unique to XiangQi, once it crosses the river, it can move sideways; cannot move two squares on the first move like as in the case of chess, nor can it capture another piece diagonally
Cannon: unique to XiangQi; can move an unlimited number of spaces horizontally and vertically, but if intending to capture a piece, must jump over another piece, which can be the player’s own piece or another piece of the enemies

At the end of the day, both games are equally fun and demanding if played in a transparent setting. Although presently, computers beat humans in both games, our mission is to promote the social aspect and cognitive benefits of playing such games that has over 800 million players worldwide. Stay tuned for our upcoming Beta release of MindSports IO and news on how to participate in the token sale for the most trusted online board game network.

As a chess lover I can't wait to try Chinese chess. Is there already a date for the beta release of the platform?

Hi there we will announce our beta release next month.