Fees Collected on the BitShares blockchain through September 2017

To assist BitShares stakeholders with understanding the source and quantity of fees that are collected by the network, a report has been prepared that covers the collected fees since the blockchain's inception in October 2015 through September 2017. Note that the fees collected are the fees paid by users for operations that they submitted. A summary of the report appears below. 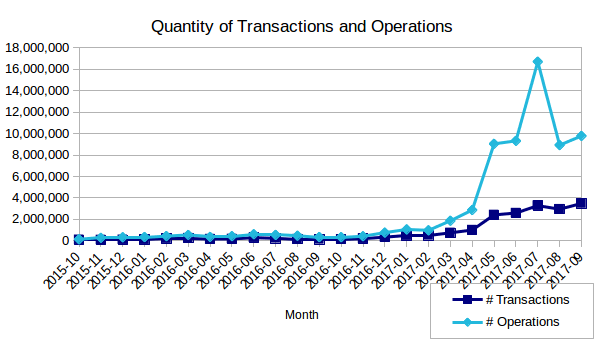 Fees for each operation can be found here: https://bitshares.org/wallet/#/explorer/fees

Interesting. I have been trying to compare BTS with Etrade. Using the 5 cent price for BTS; 3.2 million BTS is $160,000 of revenue per month or (times 12) about 1.92 million per year. Lets call it $2 million. eTrade has revenue of 2.3 billion a year and is worth 12.7 billion market cap. About 5.3 time revenue. If you call it 6 times revenues. If BitShares is worth 6 times annual revenue ($2Million) then it is worth 12 million in market cap. Currently the market cap is 134 million. The BTS price has been all over the map from less than a penny $0.004 to $0.40. We can now guess a fair price for BTS; lets say 10 cents. That makes the BTS worth 24 million; or BTS is $.20; BTS is worth $48 million. That said BTS is one of the few cryptocurrencies that actually has a working product and positive revenues. It is in a wildly growing industry and posed to completely revolutionize finance. In the early dot com days no one wanted to be profitable because then people would start doing ratios on the companies and they would look overvalued. It is interesting also that most of Etrade Revenue comes from margin Interest and most of Bitshares revenue comes from asset creation. Trading is almost free on Bitshares! This is one alt coin that I think is undervalued long term. And with revenues like this it can survive long term.

Awesome analysis!!
However, your fundamental number crunching is missing one thing: Technical Analysis of Charts. That's what I do and here is my projection of BTS target of $0.75 which would be 1.5 Fibonacci of white colored wave 1. However, it could go to 1.618 Fibonacci which would be at $0.81. 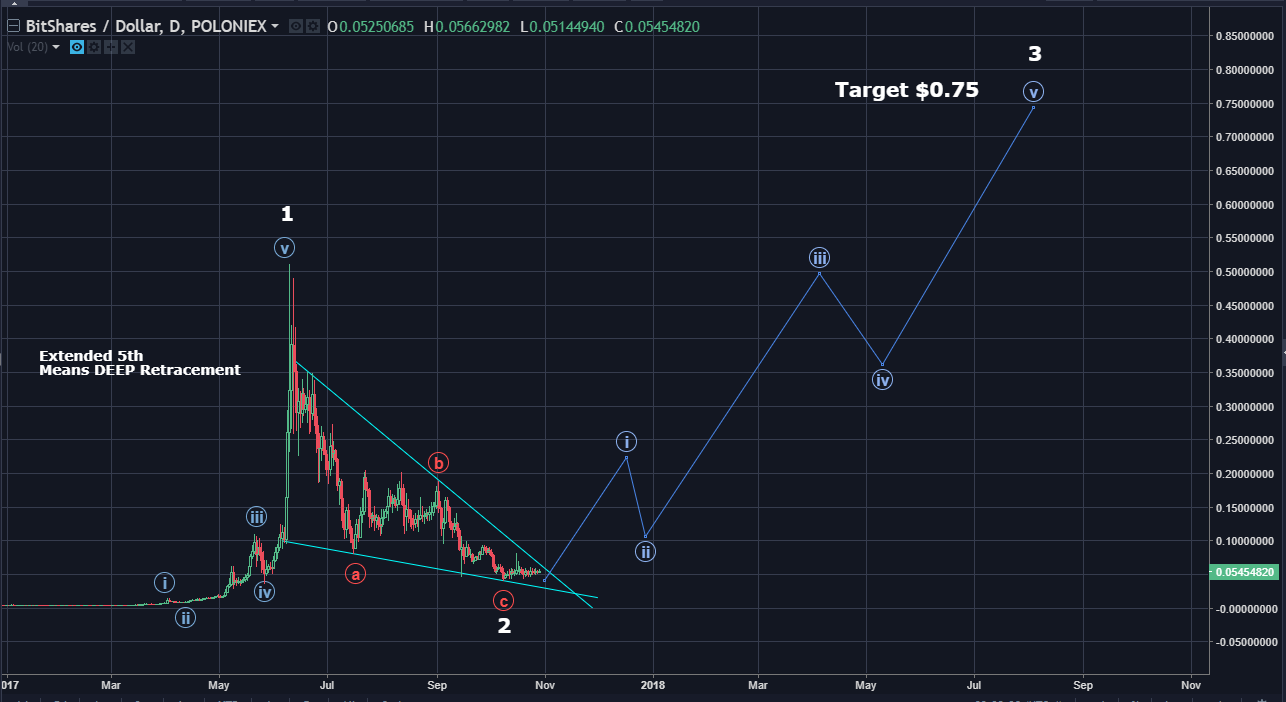 Now, will be at the peak of white colored Wave 3; so after a Wave 4 retrace, Wave 5 could provide a sky high level of $1.20 as shown via Elliott Waves: Interesting. From a technical standpoint how long does consolidation (or floating in the 5 cent range) need to take place before conditions are right for the next up move?

Timing on correction completion is very hard to project. I know this, five waves for wave c are in so....anytime. Just like BCH...many were very frustrated and took their losses. Not me, I stuck to my EW counts and chart pattern analysis and just bankd almost 37% profit!

All the cryptos have this "hurry up and wait" syndrome. They quickly place the impulse waves and then take their time on the correction side....i mean a real long time. That's why I've been saying the best tmie to buy is at the terminal end of the c wave of an a,b,c, correction. To know this, one has to know how to count EW.

Great answer. BCH was a critical example of patience. I'm learning to buy only amounts that I know I have all the patience in the world for!

I don't think you can compare E-trade with Bitshares. E-Trade is valued based on its potential for growth (no room to grow) and ROI (in the form of dividends) to investors. Bitshares is similarly priced based on potential for growth (trillions of dollars of cash it can represent as well as being the mechanism that will allow the unbanked in the world to store and trade things of value easily) and in this sense ROI in the form of fees taking tokens out of circulation is just but a small part of the asset's overall valuation.

I swear this exchange is so massive and so undervalued, it just stumbles the imagination..they have been established for quite some time now and every time i pick up a new article a new business is rolling over to them..just very impressive..thanks for the article

It's moon time sooner or later for bitshares