Fees Collected on the BitShares blockchain through October 2017

To assist BitShares stakeholders with understanding the source and quantity of fees that are collected by the network, a report has been prepared that covers the collected fees since the blockchain's inception in October 2015 through October 2017. Note that the fees collected are the fees paid by users for operations that they submitted. A summary of the report appears below. The BTS fees collected since the inception of the blockchain are plotted below. Note that a fee paid in BTS does not necessarily mean that the operation itself involved BTS. For example, the fee to transfer BTS could be paid with BTS, bitUSD, or any other asset. It just happens to be that the majority of fees are paid with BTS. 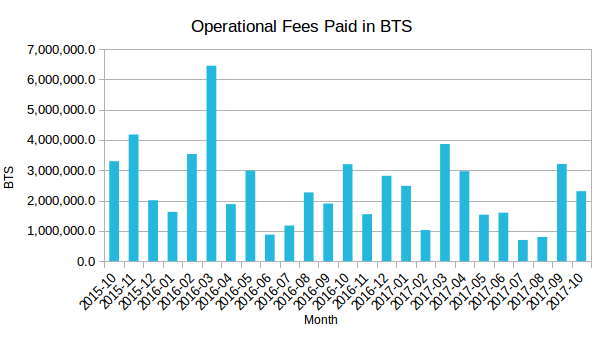