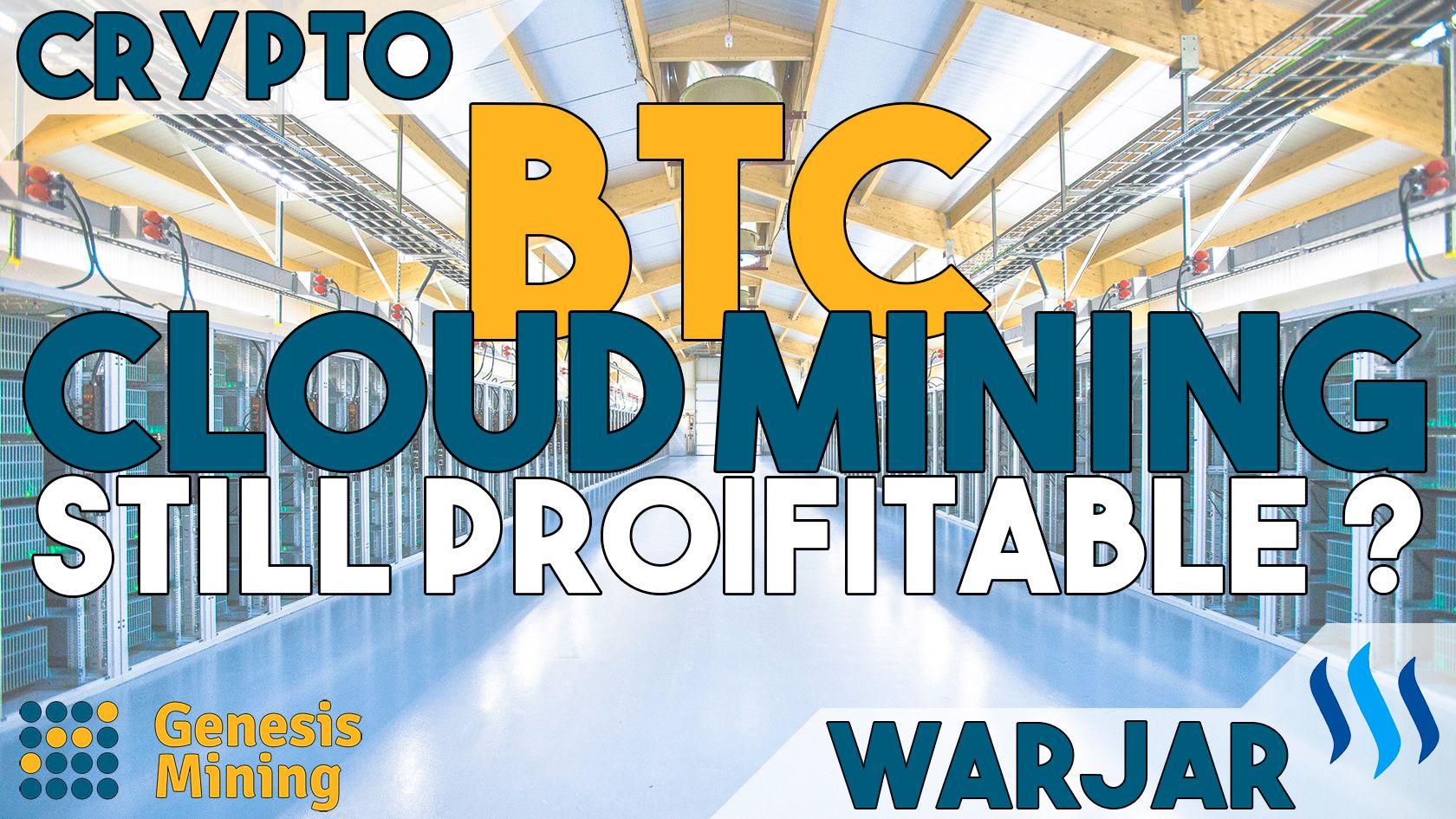 Back in August last year I wrote a post on BTC cloud mining, only days after having made some investments at Genesis Mining. In the comments an essential question was brought up by @janusface; “why not invest directly into BTC instead?”

Put simply; mining is only profitable over buying coins if the invested amount rewards you more coins than what you could have purchased directly for the same investment at the initial investment time. Simple enough.

In this post I will share the results of my returns so far with Genesis Mining, including my estimate on where it could end up before the contract eventually is terminated.

A QUICK UPDATE ON HOW A GENESIS MINING BTC CONTRACT WORK
When starting the BTC contract you pay a one-time amount that grant you a certain amount of hash power. The amount of hash power is yours for a “lifetime” and determines how much BTC you can mine per day. (Along with the mining difficulty, BTC reward per block and some good old fashion luck.)

GM will also take a maintenance fee, currently at 0.00028USD per GH/s per day. This fee is deducted from your daily BTC reward, and is the reason the “lifetime contract” won’t last you a lifetime. The contract is terminated when the daily payouts is no longer sufficient to pay the maintenance fees over a period of 60 days.

THE RESULTS
Below is a graph showing the historical payouts and my estimate for future rewards. The estimate is based on the pervious history, and is becoming increasingly accurate as more data is added. At this point, having received 76% of the initially invested BTC, the estimate is fairly stable and thus equally accurate. The calculations required is a little bit more complicated than one first might assume, and I will not be going in full details at this point.

The graph is showing the following information:

Figure 1: Graph showing the daily and accumulated BTC payouts from Genesis Mining, including the future estimates.

The predicted daily payouts are based on a linear percentage increase in BTC mining difficulty (note that it is not a linear difficulty increase). The BTC difficulty is adjusted every 2016 blocks, roughly every two weeks. The difficulty is directly related to the BTC mining rewards. Since this contract was opened the monthly average BTC rewards have been reduced by 6.93%.

If the mining difficulty continues to increase with the same average trend, there will be a 32.6% profit in BTC on this investment. Shortly after uploading the first post on this in August 2017, I started to prepare a post similar to this one. I never posted it as the interest appeared to be low. However, while making that post I made my first calculations on a predicted profit. I based my calculations on the BTC mining difficulty for a year back in time, and my estimate then was a 32% profit. Since August the auto-adjusting estimation in my spreadsheet have fluctuated from sky high, into the negative. As the amount of data points have grown, the estimate is stabilizing, and it is now interesting to see how close it is to my initial estimate.

For reference. To only break even the monthly reduction in BTC mining rewards have to increase to 16.15% from this day on. Which at this point seem highly unlikely.

The contracts in this investment was purchased at a 3% discount, and has not been boosted by any affiliate rewards.

IN CLOSING
There are several other factors that have an impact on the daily BTC reward, directly and indirectly. These can be the maintenance fee, the BTC price, transaction fees, etc. Those could be a topic for later, should there be an interest.

I am not recommending everyone to go invest in cloud mining. I’m merely showing my own results and that the potential to make a good profit is still there. Timing is an important factor in making a profit, and the hardest to predict. Make your own evaluation of the situation before making an investment.

Should you decide to invest make sure you give yourself the best odds for success. At Genesis Mining you do this by using a 3% discount code when purchasing a contract. Use a friends code, or you can use mine which is posted below. My second tip would be to purchase the contract that gives you the best price per hash power. Those would normally require a higher investment amount. If that feels too risky at the time, perhaps it is not the right time to invest in cloud mining at all. In that case investing directly into coins/tokens might be a safer option.

My 3% discount code for any Genesis Mining contract:

Thank you for reading and the best of luck with your investments!

This is the first post I have read about mining. At first I thought it would b e boring, but I was here and I read fast. By the end I was engrossed and very interested. Thanks to your post I have a new nugget to mine. LOL

thank you sir.i'm very lucky for your good a information. you are creative person.i hope all steemit member follow.i try share your information.

Glad you found it interesting, tariqul95.

I've always known that there's more to this mining of a thing. But I still wish I could afford it in the next minute.

Ohh well it is an informative one 😊
Thanks for sharing.

Hello warjar, nice meeting am Hilary from Nigeria. Just joined steemit recently, but I have not been finding it easy understanding the system here, also I have tried my best to be consistent with my posting, but am not get much attention, so I need to no the way to go about to make it on steemit....Thanks, would be expect a reply from you

Hello Hilary,
pardon my late reply. I hope you've made yourself comfortable on the platform by now.

If your concerns still apply, my two cents would be something like this: Educate yourself on the basic mechanisms and functionalities of the steem blockchain. This information is made available by many good posts, searchable on this very platform. I've touch onto some of this in my own posts.

When you know how the platform works, start directing more of your search for answers inwards, rather than outward on the established steem-icons. The entire idea of a decentralized platform is that there should be no elite, no rulers to dictate your participation and behavior. You, yourself have the power to impact and try form it as you see best. For me the cornerstone to build upon is the fight for freedom of expression. Something that is under serious attacks, also on this platform.

As for raising attention, one could learn to understand and manipulate common human psyche. Play on peoples’ greed, appeal to fame and authority. However, as a human with a healthy dose of empathy I doubt you would feel very good about it. Instead I would choose to embrace a topic of my own interest. You would have a good time creating your posts and attract likeminded people with a genuine interest.

I hope you have a great day!

Congratulations @warjar! You have received a personal award!

Congratulations @warjar! You have completed the following achievement on the Steem blockchain and have been rewarded with new badge(s) :

Hi @warjar would you like to support @steemingcuration community curation account? We give 100% of our curation reward in both steem and TRX to our delegators. On top of that, we also give about 35% APY(from your total SP delegated) to our delegator and this percentage is varied from month to month as it depends on this account's total monthly earning. Thank you in advance for your support!