Believe it or Not - are they related? 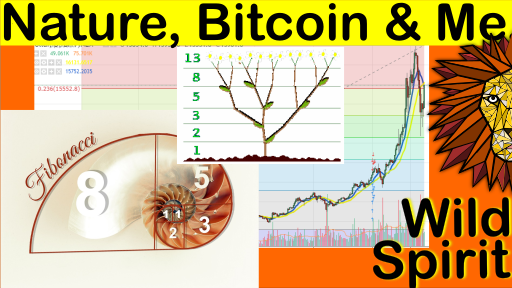 A series found in nature predicts the levels to which Bitcoin price is likely to correct ...

Amazed to hear this? What mumbo-jumbo is this you may ask. Well, this is nothing that I am inventing. It is a very old Stock market theory and I am merely examining here for applicability to recent Bitcoin price corrections.

As you are probably aware, I am no crypto expert but am a keen observer of nature. As such, my qualification of speaking about Bitcoin price corrections is limited to making certain observations and drawing correlations. I would like to put out a disclaimer that no one should base any investment decisions based on my observations. However, everyone is welcome to either be amazed or criticize the hell out of my observations.

So - what is this series found in nature I am talking about?

The design sequence nature uses in practically everything...

Have you ever seen some patterns in nature and wondered, how is this so pleasing to the eye? Have you also noticed that certain patterns, proportions etc. are commonly seen in nature - in petals of flowers, branching of trees, beehive construction, scales on a pineapple, shell proportions and shape of a snail's shell....

All of these wonderful proportions follow a mathematical series, named by us humans as 'Fibonacci series'. The series is obtained by starting with one and progressing it such that each number is an addition of two previous numbers.

The ratio of each number to the number behind it in the series tends towards 1.667 as we go higher in the series. This number is the 'Golden number of nature' since it provides the proportions most pleasing to eye and more importantly, helps to utilize space and resources in the most efficient manner possible.

For example, when a tree is growing, the branches follow the natural Fibonacci sequence to maximize the exposure of sunlight for all leaves. There are many such examples in nature where Fibonacci series and the Golden ratio number are found. 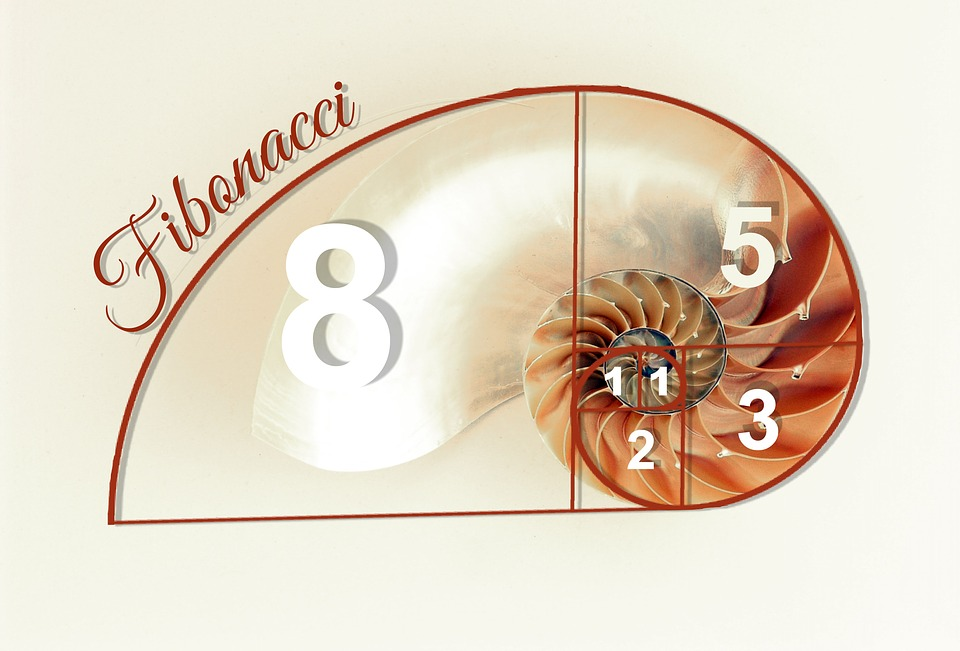 Even the human heartbeat has the golden ratio between the QS and T peaks!! Those who trade stocks regularly have always noticed that the stocks never move up or down constantly. Any strong move is always followed by a 'retracement'. Traders also know that these retracements depend on market (or the public) sentiments and therefore, are governed by the laws of human psyche and ultimately by Nature!

When a strong uptrend starts in the market, everyone starts buying and this rapidly drives price up. The doubting Thomases in the crowd then start taking some profit at some level, because they are not sure how long the ride is going to last. The dip caused by their selling causes a panic reaction in common traders and selling starts, which dips the price rapidly. This continues for some time till people standing on sidelines, waiting for the share price to come down start buying and the price starts going up again.... People have observed that certain Fibonacci levels (ratios) are very capable of predicting how long the public sentiments run in such corrections. An example is shown below: 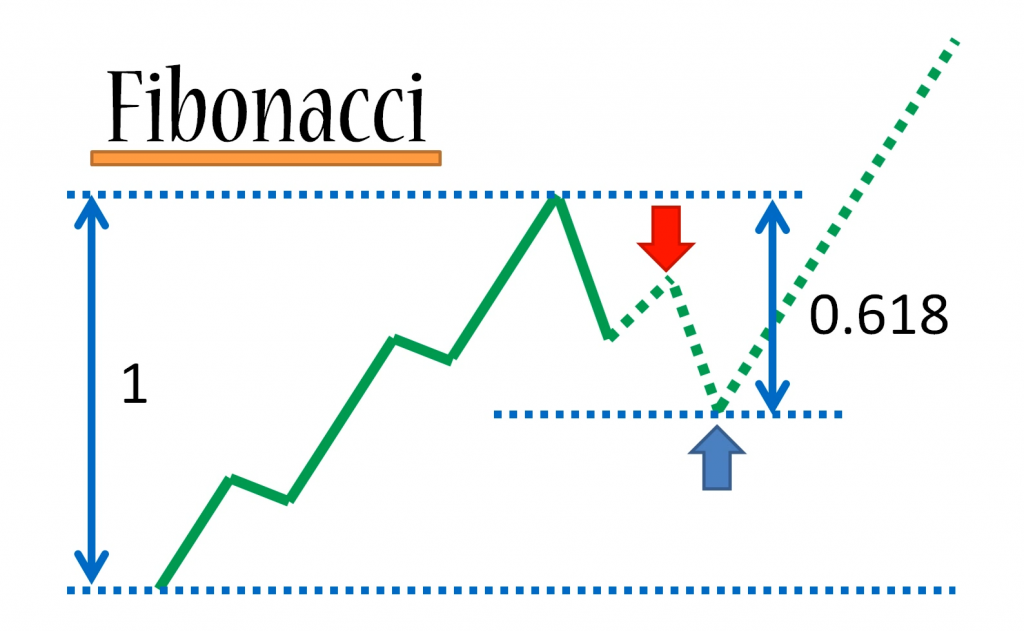 The example shows that, if the peak is considered 100%, then a typical retracement level at which support could be found by buyers is at 0.618 or 61.8%

I studied a BTC vs USD price (Bitfinex) chart on Tradingview.com and checked correction levels and support/rebound at three different instances ( So called 'CRASHES of BITCOIN') in 2017.

As we can see, the price retracement went exactly to the important Fibonacci level of 50% and then rebounded! 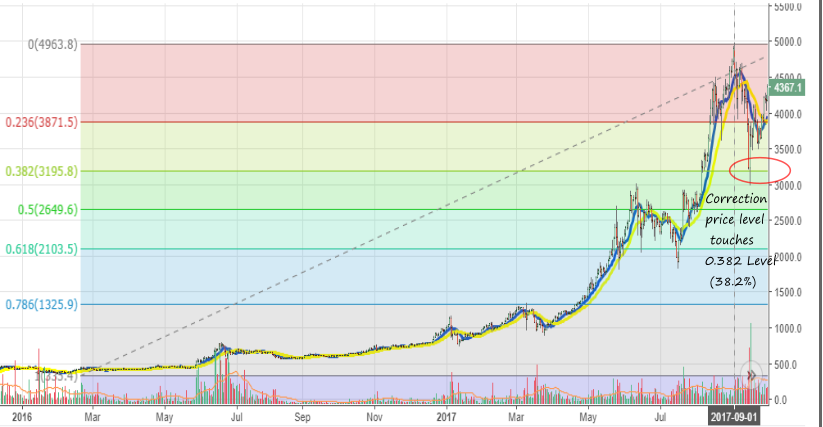 As we can see, the price retracement went exactly to the important Fibonacci level of 38.2% and then rebounded! As we can see, the price retracement went exactly to the important Fibonacci level of 38.2% and then rebounded!

Again - I am no expert on Bitcoin, market pricing or correction levels but this does seem to be an interesting correlation between something in Nature and Bitcoin doesn't it? This leaves ME mesmerized. How about you?

The Volatile Bitcoin price may be well in sync with Nature's laws??

Steemians, please comment freely to share your experiences, knowledge and views about my observations. I would love to learn more and know if I have made any mistakes in this analysis.Thanks.

Note: All images except for the wildlife photos and the title image created by me are from pixabay.com except where source is explicitly mentioned.

Thanks Nainaz. This was rattling around in my brain since September when I thought I saw a correlation. Last night, when I saw the recent correction also following the same trend, I thought I should put forth my observations and seek input from Steemians. Hope Bitcoin does go higher again. Thanks. Upvoted your comment

This is very interesting... I think you should do further research with other currencies for comparison. With enough supporting data, you could be onto something. If Fibonacci is controlling currency, then it's controlling everything and these number are indeed sacred and are the keys to expanding consciousness and finally evolving. Awesome post!

Thank you for your thoughtful comment. I will continue to observe and report. Upvoted your comment. Thanks for your visit to my blogs and your kind words of encouragement

Your posts are informative as always, god bless you.

Thank you for taking the time to read and appreciate. Upvoted your comment

Thanks. Your support is appreciated

Isn't it? Nature works in strange ways! Thanks for your comment. Upvoted it

Thank you for your kind words of appreciation and for taking time to visit my blog. Upvoted your comment.

Thanks. I am glad you found it interesting. Thanks for visiting my blog

♥Your posts are enlightening as usual...♥

Pls I need ur upvote guys on my post. I will be very grateful if I can get an upvote from @vm2904 on all my post and from all of u guys too. it will go a very long way. Thanks guys....if I may ask can u introduce me to any community that u belong so that I can be with you guys and generate vote for my posts? thanks

You are welcome. Thank you for taking time to visit my blog

what an astute observation now if we could only work that into a good strategy!

My amazement is that fibonacci finds application in nature as well as a trading tool. Your analysis is very correct. And it reinforces what trading analysts believe too...

I support you with my resteem service

Congratulations! This post has been upvoted from the communal account, @minnowsupport, by vm2904 from the Minnow Support Project. It's a witness project run by aggroed, ausbitbank, teamsteem, theprophet0, someguy123, neoxian, followbtcnews/crimsonclad, and netuoso. The goal is to help Steemit grow by supporting Minnows and creating a social network. Please find us in the Peace, Abundance, and Liberty Network (PALnet) Discord Channel. It's a completely public and open space to all members of the Steemit community who voluntarily choose to be there.

So useful to know it!
Yes, I have notices that there're many sign anf ymbold in nature that can be met in absolutely different spheres, but they have definite meaning and even give promts! Like in your examples!
I'd like Btc go to the sky height, and we all found many proofs for it in nature)

Yes it is. I keep seeing examples of it in any subject I touch, I was really surprised to find that it has applications even in space - Galaxy spirals also are based on Fibonacci.
Thanks for taking time to visit and for your kind words of appreciation.