Bitcoin crashes towards $12,000 during 'cryptocurrency bloodbath' 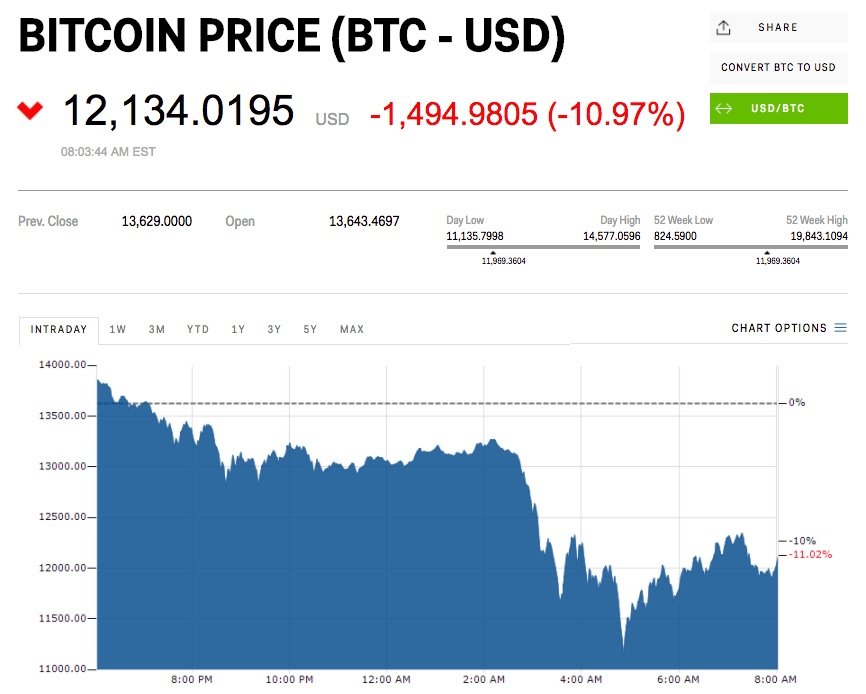 The 10 biggest cryptocurrencies by market capitalisation were falling Tuesday morning.

Declining Japanese and South Korean trading volumes have been blamed for spooking the market.

Cryptocurrencies surged in 2017 but have been marked by volatility this month.

Bitcoin fell as much as 14% in early trade, falling through both $13,000 and $12,000 levels, but has recovered slightly. The decline appears to have spooked the market, with other coins selling off at the same time.

Fawad Razaqzada, a market analyst with Forex.com, described the selloff as a "cryptocurrency bloodbath" but said: "Suggestions that this is the start of the demise of cryptos is very premature."

Increased regulatory scrutiny from South Korea has dampened sentiment in the sector. Mati Greenspan, an analyst at the trading platform eToro, said declining volumes from Japan and South Korea appeared to be behind Tuesday morning's sell-off.

Crypto prices in these markets typically carry a premium, which pushes up average prices globally. Traders in these Asian markets are generally buyers too, meaning a tail-off in activity could create a big mismatch in buyers and sellers.

"The volumes have been declining steadily both in Japan and South Korea over the last few days," Greenspan told Business Insider. "This morning, the combined volume from these two top cryptotrading countries dropped below 30%. Looks like they're tired of overpaying for cryptos and waiting for the market to even out."

"China is said to be targeting websites and mobile apps that offer exchange-like services, in a bid to block access to platforms that deliver centralised trading on cryptocurrencies. In addition to developments in China, South Korean Finance Minister Kim Dong-yeon reiterated on Tuesday that the government is actively considering an outright ban on crypto trading."

Elsewhere in the cryptocurrency space, deVere Group, an independent financial adviser with $12 billion under advisement, announced plans to launch its own cryptocurrency app. deVere Crypto will let people store, transfer, and exchange five major cryptocurrencies, including bitcoin and ether.

DeVere's CEO and founder Nigel Green said in a statement: "Traditionalists who declare cryptocurrencies 'a fad' are akin to King Canute trying to command the tides of the sea to go back.

"deVere Crypto is designed to meet the growing need and want to store and transfer cryptocurrencies. It’s meeting the evident demand."