There has been a lot of talk in the last couple of weeks about BitCoin Cash (BCH).

In particular, there have been many public accusations of insider trading at Coinbase. So much so that they had to make a statement acknowledging it, and briefly suspend trading of the coin. Is insider trading of a cryptocurrency illegal? Is it even possible? In this post we will answer these questions and more.

BitCoin cash first appeared on the scene after a BitCoin fork on August 1 2017. It traded as low as $200 on August 5, then cracked $1000 on August 19, before trading back down. The price started to move again above $1000 on November 19, and started appreciating solidly from Dec 13.

Here is the chart of BCH's performance since it launched (from Coinmarketcap): 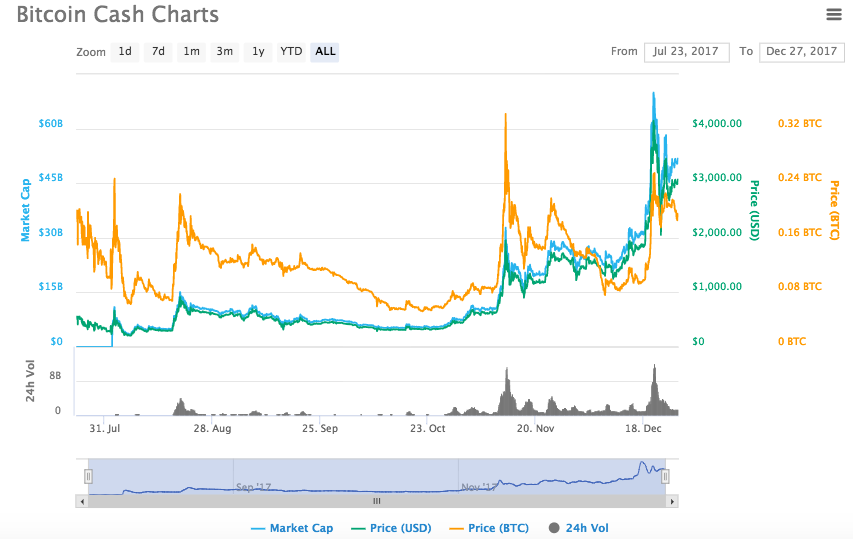 The recent spike in Bitcoin Cash was record-setting in US dollar terms, but was not as high as its previous price spike measured in BTC. Note the volumes and Bitcoin prices were about the same

Coinbase first announced they were going to support Bitcoin Cash on August 3, 2017

They said they would support it by January 1, 2018. In fact they delivered it a week ago, on December 20

The BCH price went nuts, spiking 70% in a day. The spike began hours before Coinbase made their announcement. By the end of the trading day on the GDAX/Coinbase exchanges 1 BCH was trading for USD$8500.

(Pro-Tip - do your cryptocurrency transactions on GDax instead of Coinbase and avoid the fees and transaction size limits of Coinbase.)

Coinbase's CEO Brian Armstrong was forced to comment, saying that the company's employee trading policy prohibited employees from trading in BCH.
"All Coinbase employees and contractors were explicitly prohibited from trading Bitcoin Cash and from disclosing our launch plans over a month ago. This was communicated multiple times via multiple channels to employees. For instance, I made sure it was emphasized at our Friday Q&A sessions, and in emails sent to all employees."
Source

Just to be sure, they told us that on Twitter as well.

Given the impossibility of linking every wallet on every exchange back to individual employees and their family and friends, were these many warnings from the boss really preventing this trading? Or was it a "nudge nudge, wink wink" hint at them to do it?

Anyone who ignored the boss's repeated warnings certainly did well for themselves.

Later that same day, Coinbase/GDax suspended trading in BCH for almost 24 hours due to "significant volatility". 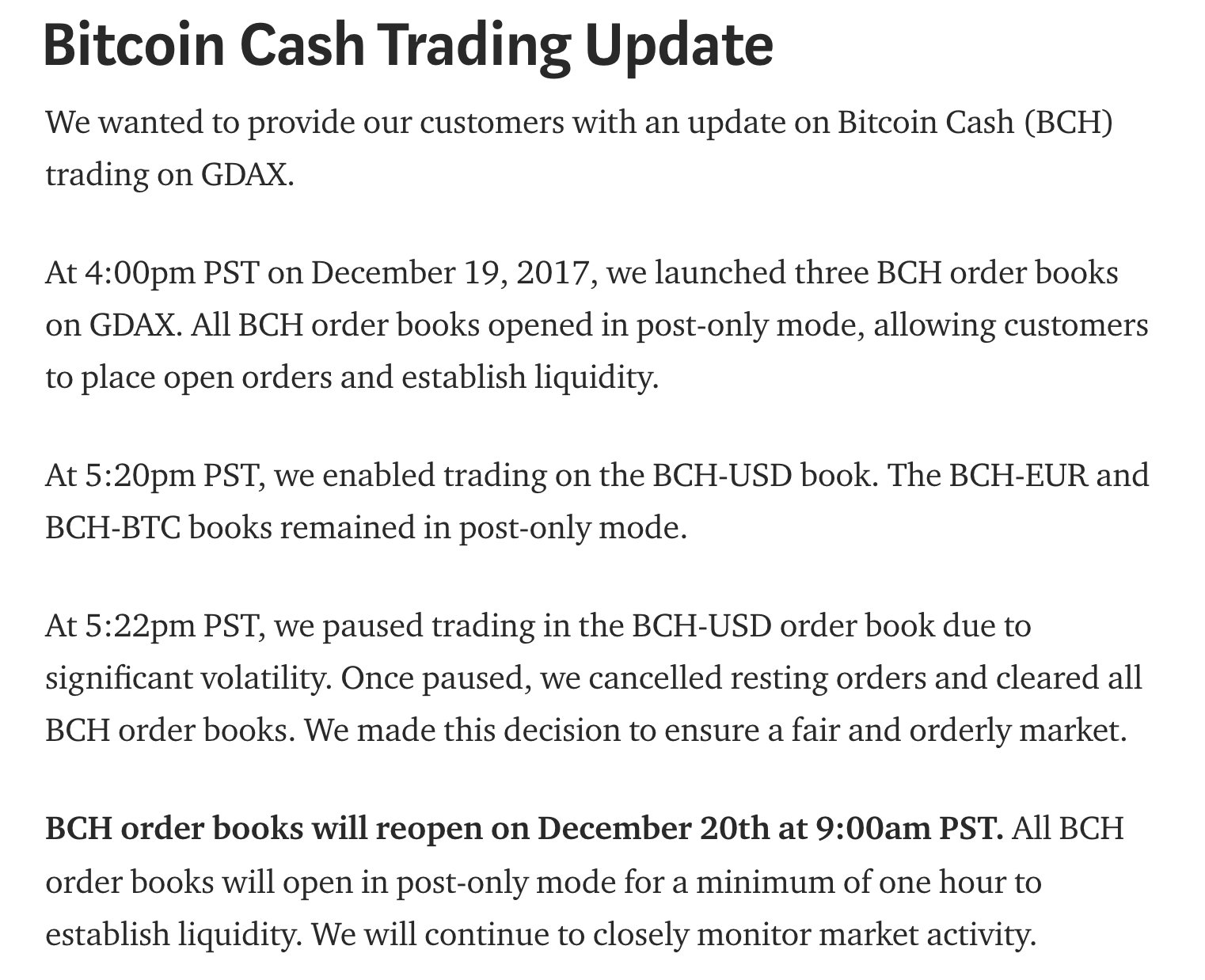 Was this when the real insider trading began? It seems like the divergence in pricing between Coinmarketcap ($4329) and Coinbase ($8499) is indeed a significant anomaly. 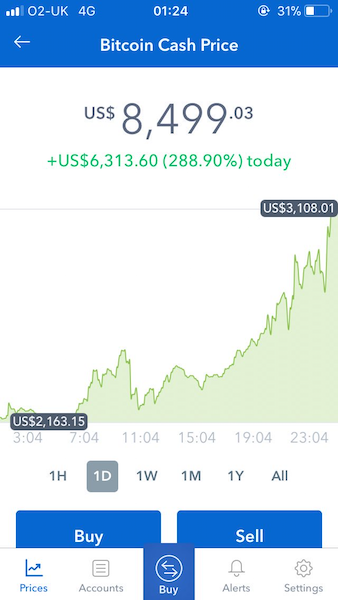 Does this signify insider trading? Or price manipulation?

Artificially inflated prices create opportunities for money laundering, as you can learn from this fascinating Miles Mathis essay about the art world.

Despite all the company's protections and policies, Bloomberg was quick to say "this shows that the SEC must regulate Bitcoin"...or words to that affect.

The Bloomberg journalist says Coinbase was being attacked by hackers, but I have not been able to find any stories confirming this. Bitfinex was hit by a DDOS attack on December 12, but Coinbase just said their site was down for "site maintenance".

Employee policy aside, is insider trading of cryptocurrency a crime?

Trading by specific insiders, such as employees, is commonly permitted as long as it does not rely on material information not in the public domain. Many jurisdictions require that such trading be reported so that the transactions can be monitored. In the United States and several other jurisdictions, trading conducted by corporate officers, key employees, directors, or significant shareholders must be reported to the regulator or publicly disclosed, usually within a few business days of the trade. In these cases, insiders in the United States are required to file a Form 4 with the U.S. Securities and Exchange Commission (SEC) when buying or selling shares of their own companies.

Were insiders buying or selling shares in Coinbase? No they were not. So what about material information not in the public domain? First of all, this is a private company. There is no requirement that private companies have to make material information public. Secondly, Coinbase had already announced that they were going to support Bitcoin Cash by January 1, 2018. It seems quite clear to me that the information was in the public domain.

Bitcoin is more like a commodity than a share. Are employees of oil companies banned from buying oil?

Was there manipulation of the BCH price, particularly on GDax? This to me is the bigger question. The divergence between the GDax and Coinmarketcap prices seems unusual.

Methinks the whales in the market are making a lot of money off these roller coaster dips.

The activity last week looks similar to the previous BCH run up at the end of November. Then, Bitcoin punched through $10,000 for the first time, then broke $11,000 almost immediately. Then it crashed back to $9500, as BCH was rising to record new highs. Coinbase suddenly went down. There have been outages corresponding with significant trading volumes and price moves on Dec 1, Dec 7, Dec 11, Dec 12, Dec 20, Dec 21. (Source Coinbase )

There seems to have been a co-ordinated effort to dump Bitcoin, driving the price down for a 30%+ "flash crash" that #hodlers are familiar with. This was accompanied by a simultaneous spike in BCH. The "dump-and-pump", if you like.

Then, after BCH reaches a peak, or BTC reaches a trough, Coinbase stops trading.

Maybe Coinbase was under a DDOS attack, maybe their platform struggles to keep up with $10 billion+ trading days, or maybe they suspected insider trading and had to halt things while they investigated. It will be interesting to see if this same pattern happens again in the future. But is this insider trading? This was posted in a comment on Reddit about Ripple (XRP). There is no evidence that the leaker traded BCH - or, for that matter, the commenter. However they did delete their account, which is somewhat suspicious. 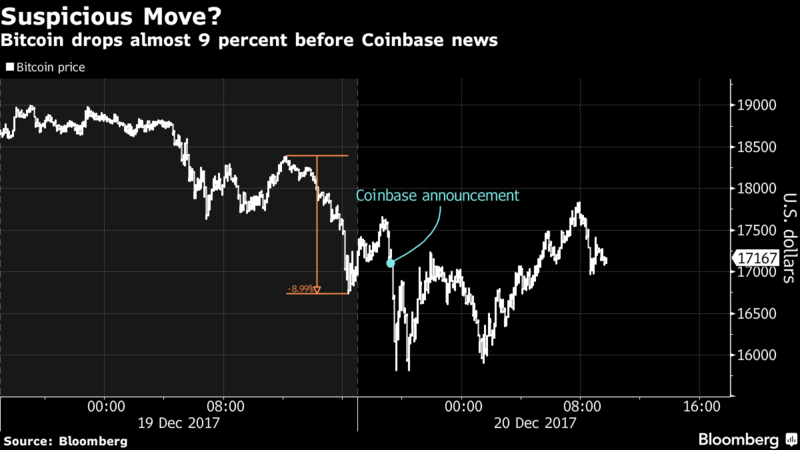 Did Coinbase employees trading on insider information cause the 9% drop in BTC price as well? The trading volume in Bitcoin on Dec 19 and 20 was almost $40 billion - if this is Coinbase employees, they are obviously ridiculously well paid!

As best as I can tell, Coinbase has 106 employees, so either each one of them was insider trading Bitcoin with an average trade size of $377 million and pumping the Bitcoin Cash price up with an average of $112 million - or the price movement is not attributable to the employees. 2 other founders, Fred Ehrsam (ex Goldman Sachs, left jan 2017) and Olaf Carlson-Wee (left July 2016) are involved with crypto hedge fund Polychain Capital. Union Square ventures and Andreessen Horowitz put in $10 million; they were lead investors in Series A and B rounds for Coinbase. Other investments from Sequoia, Founders Fund, and Bessemer Venture Partners increased the size of Polychain's "seed round" to $200 million. These are blue-chip Silicon Valley VC firms. 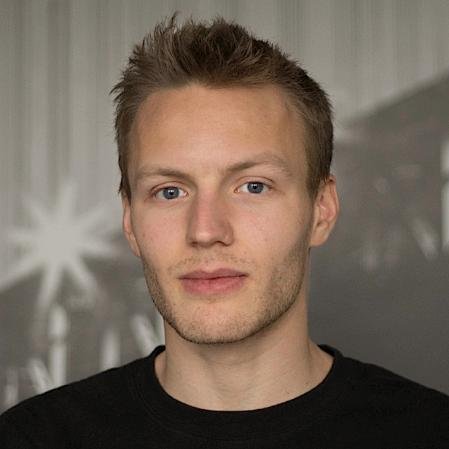 Coinbase began as a YCombinator company in 2012 and has raised $225 million in 6 financing rounds - about half of that in a series D in August 2017. Big name investors include Draper Associates, Greylock Partners, Andreessen Horowitz, Bank of Tokyo-Mistubishi, Institutional Venture Partners, SV Angel. (Source: Crunchbase)

You think any of those guys may have known that the company was going to beat its deadline on BCH trading by 12 days? Does the CEO brief the investors who put $200 million in on how the company is executing their publicly-stated plans? It would be strange if he didn't. You think the Bank of Tokyo-Mitsubishi is big enough to handle $11 billion transaction volumes? They are the 8th largest bank in the world, with $2.6 trillion assets under management.

Who's behind Bitcoin Cash? 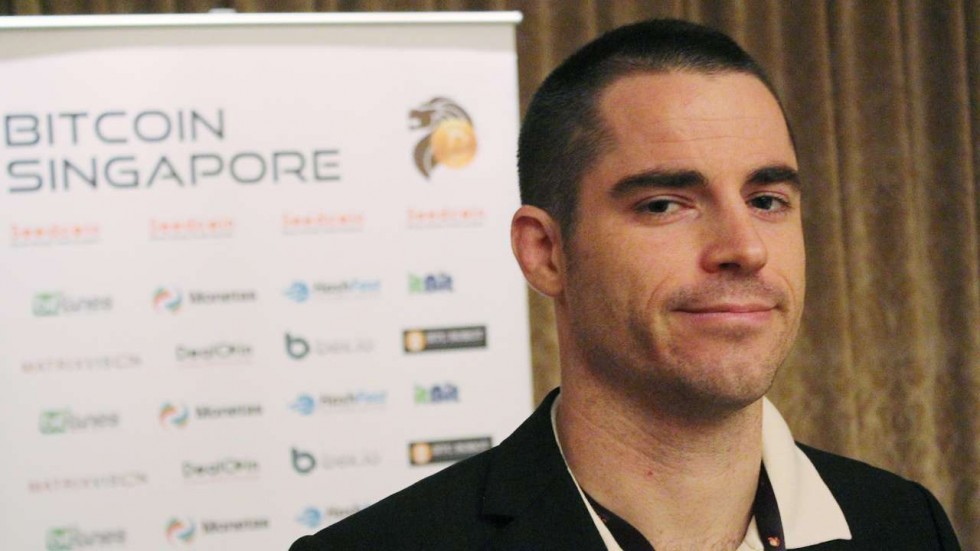 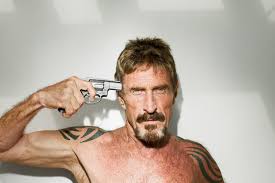 Gavin Andresen Real name: Gavin Bell - Satoshi Nakamoto "passed Bitcoin onto him" when he left the scene in 2010; blocked out of Bitcoin development in 2016 over Craig Wright/Satoshi scam Craig Wright - claims to be Satoshi, confirmed by Gavin, but his evidence turned out to be a scam 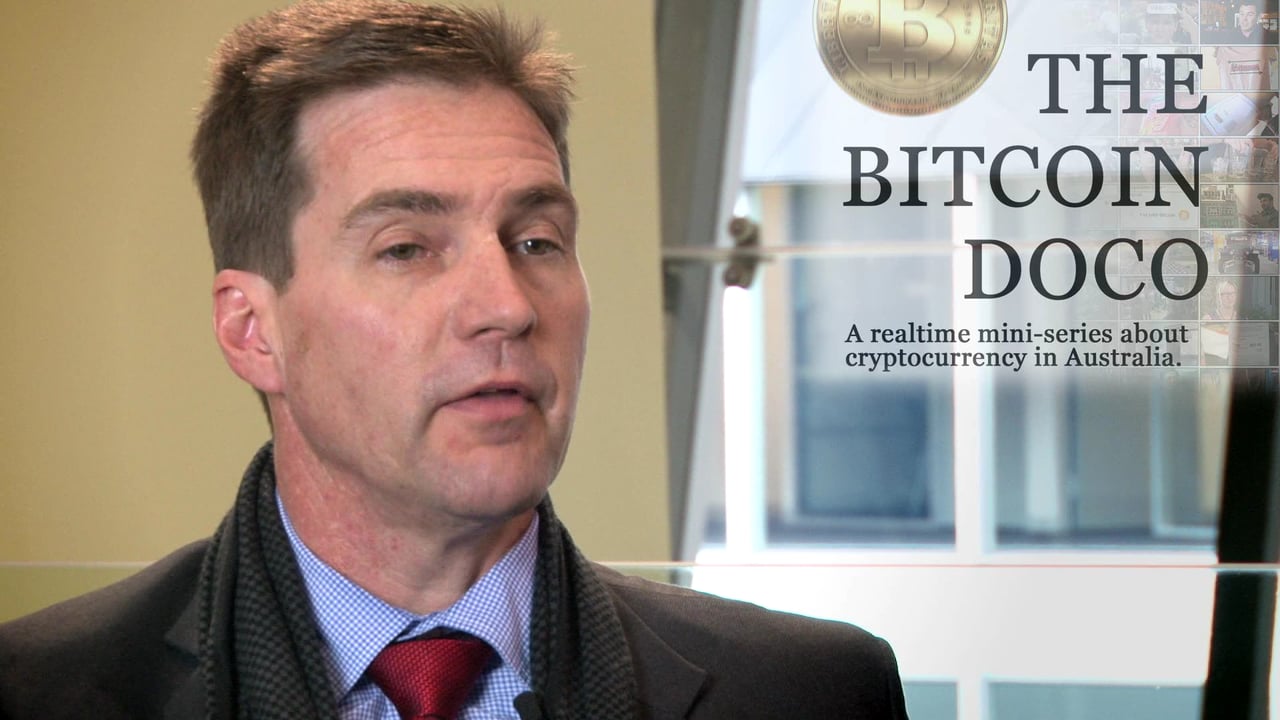 Are the largest mining pools in the world able to influence prices? McAfee says they're gonna stick together:

“I'm hanging with Jihan. That's where the money is. And yes, he is a great friend. And the smartest man I've ever met.”
(Source: Cointelegraph ) 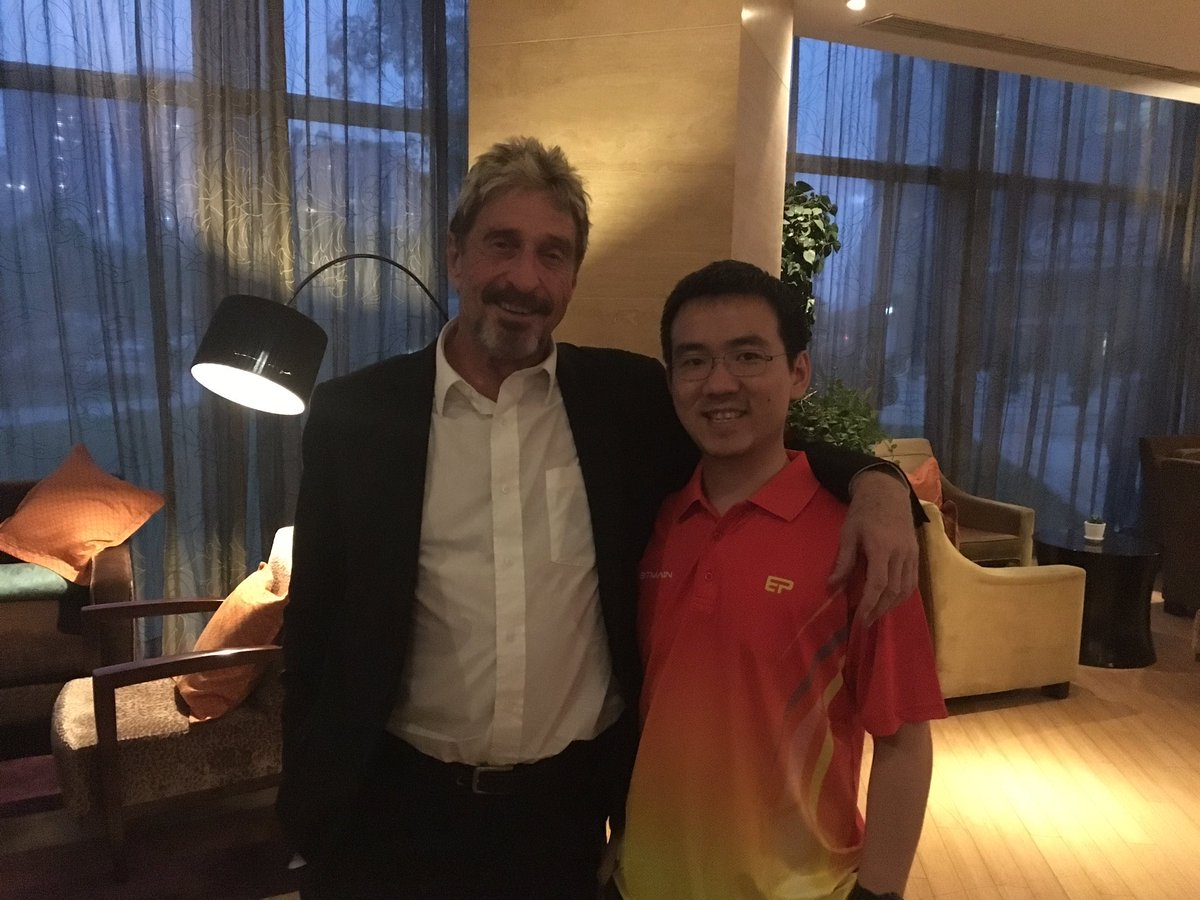 Roger Ver is Chairman of McAfee's cryptocurrency advisory board. Before the Bitcoin Cash fork he had 300,000 Bitcoins (today's value: approx US$5 billion) and said he was going to dump them in the event of a hard fork. Here is a transaction where he sent 25,000 of them to Bitfinex. At the time, Bitcoin hit a record intra-day high of $7776. It suddenly dropped about 30%, but within a week bounced back to push through $8000.

Dumping a few hundred million dollars of Bitcoin at once could definitely move a market where daily trading is a few billion.

John McAfee is also a major player with an ability to move markets. He sold his anti-virus company to Intel for $7.7 billion in cash. 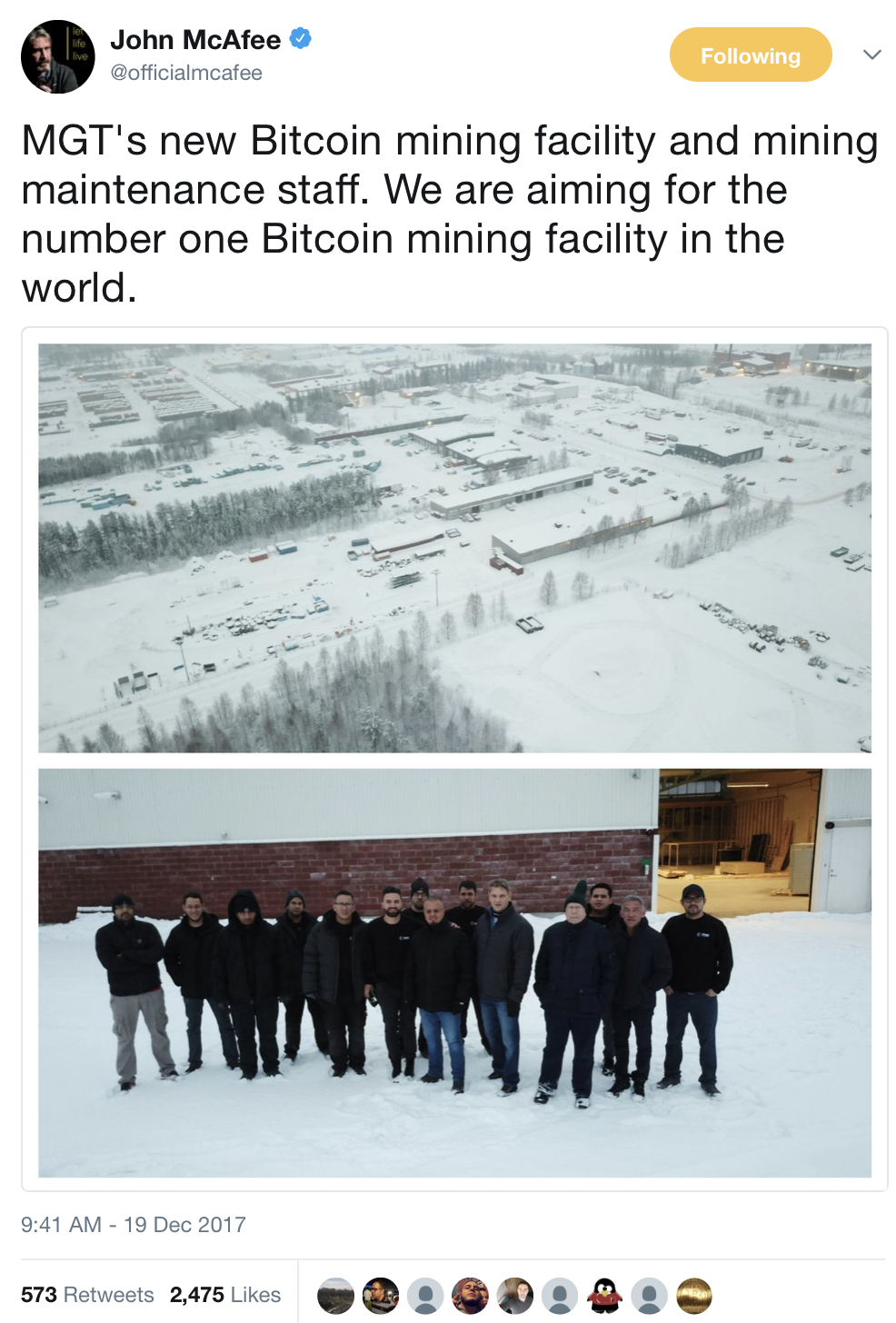 He is not afraid to use the media to influence prices. In 2002 Roger Ver was sentenced to 10 months in Federal Prison for selling explosives. (Source: Wikipedia ). John McAfee (ex Lockheed Martin, NASA) was arrested in 2015 in Tennessee for DUI and gun possession and fled Belize when police there came to discuss the murder of his neighbor. He claims to have been the worst drug abuser on the planet and was a regular for many years on the Bluelight drug discussion forum where he posted about making bath salts.

So, we have 2 scam artists claiming to know "the real Satoshi" (who is probably some Deep State team, not an actual person); 2 convicted criminal billionaires; and a 30 year old Chinese kid who somehow controls more of the world's mining than anybody else.

Do these guys have the means, motive, and opportunity to affect Bitcoin and Bitcoin Cash prices? In my opinion, absolutely. Bitcoin forums have in the past accused Jihan Wu and Roger Ver of precisely such manipulation.

An email shared on Pastebin on July 30 2017 outlines details of this plan. Also see this Reddit post speculating on how Jihan could manipulate markets. 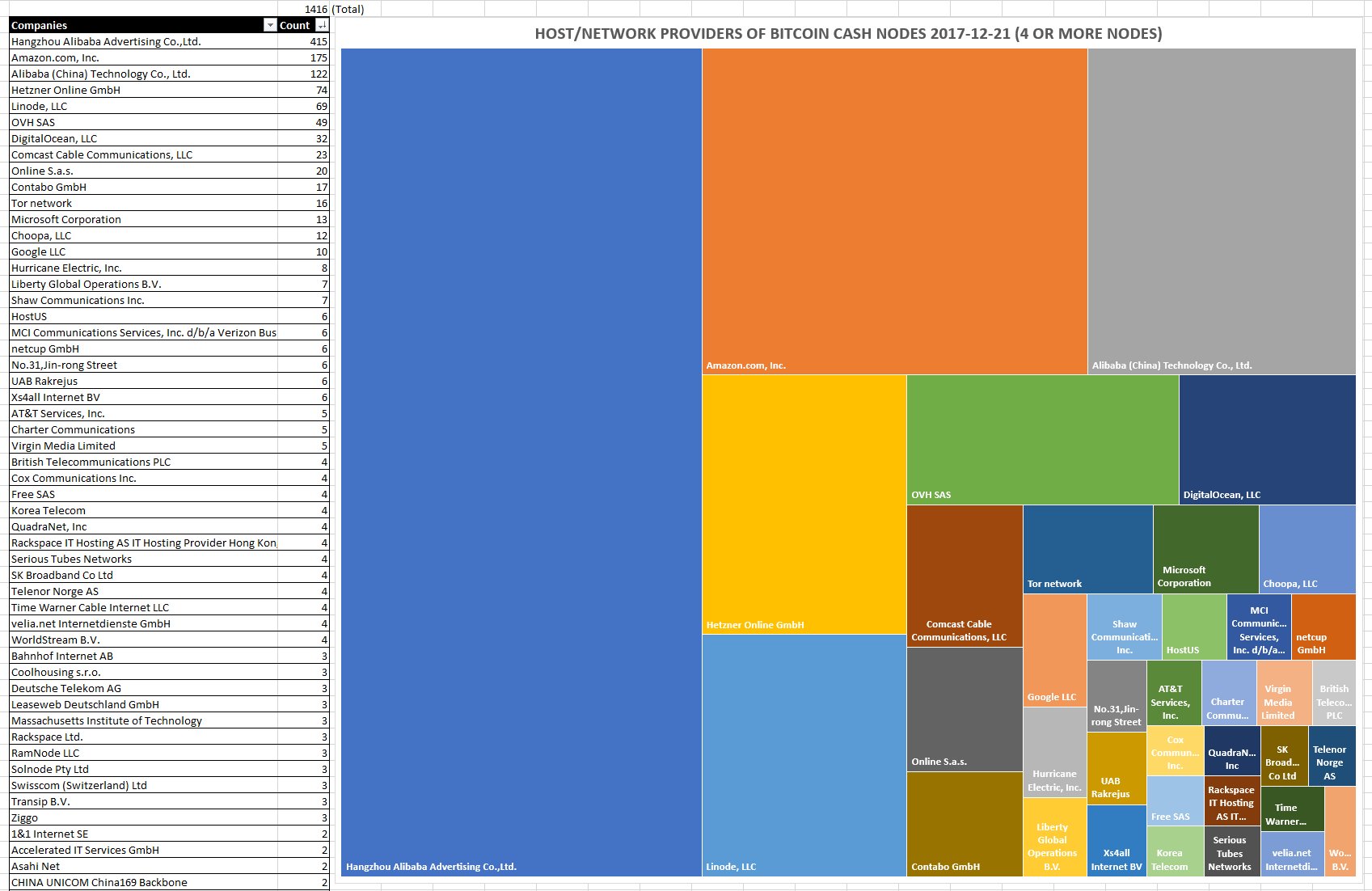 Which one to #hodl?

Both look good, but BitCoin has the brand name and is the clear winner in the popularity contest. It is hard to see BCH overtaking it at this point, but that doesn't mean it couldn't be the percentage gain winner. Personally I think there is far more upside to be had in the early stages of alt-coins, but I like BTC as a store of value. It has proved itself now to be extremely anti-fragile. Buy this book at Amazon.com

Note that another BitCoin fork SegWit2X is coming up on December 28. Not sure where is the best place to hold your Bitcoin to get the fork coins, Crypto Rebels recommends Binance.

BitCoin Cash is supposed to solve the problems of BitCoin transactions being too expensive, taking too long, and the size of each block being too small.

So does BitCoin Cash have a future? Or is it just an attempt to cash in on the BitCoin brand name and market recognition?

The addition to Coinbase has certainly made it a viable cryptocurrency that is appreciating rapidly. I think it is here to stay, but so is the price manipulation. The Coinbase employees have been unfairly tainted with the insider trading accusations, which seem to be a red herring to cover up for more nefarious market manipulation by the whales.

Thanks for reading, please let me know your thoughts in the comments.

Well written post. A lot to digest here and everyone loves a good conspiracy theory.

I guess we'll have to stay tuned to see how everything plays out.

Congratulations @steveouttrim! You have completed some achievement on Steemit and have been rewarded with new badge(s) :