PayPal aims to make digital transactions easy, fast and secure. Although PayPal has gained a lot of acceptance in the mainstream world, people in the cryptocurrency scene are generally not the biggest fans of paypal - and that's because cryptocurrency is basically the next-generation paypal.
Cryptocurrency is also fast, but it's much more secure and offers only very minimal transaction fees. A few months ago, the cryptocurrency world was eagerly awaiting "the flippening" - the moment when Ethereum's market cap would surpass that of Bitcoin.
This would mean that Ethereum would have replaced the original cryptocurrency Bitcoin as the most valuable diigital currency - for the first time ever.
But that didn't happen, and Bitcoin significantly separated itself from Ethereum's market cap after it started to surge in march 2017. It represents that cryptocurrency has finally achieved a certain level of mass adaptation, and that it was able to overtake its "rival" PayPal, who has always been very adamant about not supporting Bitcoin.

PayPal market cap = half of the whole cryptocurrency market

Although Bitcoin's total value might have surpassed that of PayPal, the cryptocurrency world still lacks usability. It is still way too difficult and complicated to actually use your crytpo assets as real world payments.
While the bitcoin network has managed about 47 million transactions in the first 2 quarters of the year (260,000 transactions per day). PayPal fielded about 3.5 billion transactions during the same time span - almost 100 times as many. David Sacks has been COO of PayPal 15 years ago and has since been an influential Silicon Valley investor.
In a recent Interview with CNBC, he stated that cryptocurrencies are now fulfilling the original vision that PayPal had when the service established in the 1990's. “For those of us who lived through the dot-com era, this feels reminiscent. You have some of the same speculative excess and random enrichment. But you can also feel that something revolutionary is happening. Money is being made programmable. That's a fundamental change with implications we can still barely see.”

A payment is just a credit to one account and a debit to another. That's a database entry. We believed that, if we could get enough people to participate, money would never need to leave the system. PayPal could become the database of money.
We added features like interest and debit cards so you'd never have to withdraw funds to the legacy banking system. When we got acquired by eBay, that project kind of stopped.

This statement is a big deal, especially since PayPal has been quite reluctant and negative about cryptocurrencies.

And now hearing that one of their original visions was to create a database of money, a system where people didn't have to rely on traditional banking systems anymore is quite interesting.
Like stated above, PayPal tried to achieve this in a centralized way, but stopped after being acquired by eBay.

Cryptocurrencies are now following through with the same objective in a decentralized way and through Blockchain Technology!

That's the thing though. I don't think Ethereum will ever surpass that of Bitcoin. Part of Bitcoin's value will be based on that it was the first, most popular, and technically never been hacked.

This is huge and just another milestone Bitcoin as passed, it's still early too.

Litecoin is going to do every well so I would buy some Litecoin...

I personally feel, bitcoin will be taken over by other crypt currency in the long run. The reason being bitcoin is only popular but not backed by any value add as technology. Steemit or other platforms like iota , which will add some value and good use cases, will win in the long run.

To the step that the bitcoin goes I believe that in a future will be more commercial than the American dollar, I do not know if I am exaggerating but it is my perception ... the bitcoin is breaking down barriers enormously in the market of the cryptomonedas and it is difficult that it had to have again A strong drop as it had a few weeks ago ..

This post has been ranked within the top 10 most undervalued posts in the first half of Aug 17. We estimate that this post is undervalued by $59.42 as compared to a scenario in which every voter had an equal say.

See the full rankings and details in The Daily Tribune: Aug 17 - Part I. You can also read about some of our methodology, data analysis and technical details in our initial post.

Hey, I was thinking about his idea:

Not fork. Split. Meaning all the blocks before the split will be forgotten / archived. Index of all accounts will be preserved, thats no problem because index is small compared to blockchain.

Right now BTC blockchain has terabytes and we are FAR from mass adoption. Wheres the limit of size that will become extremely hard to handle?

Maybe (probably) my thinking is flawed, but still....do you know?

I think the blockchain technology of Ethereum with smart contracts and all the possibilities associated with it will be the future.
Ultimately, bitcoin will somewhere in the series of currencies.
The original thought behind Bitcoin has fallen victim to greed and commerce!

Just like @sirwinchester says. Although this image shows few days earlier result, you can clearly see here that Bitcoin(BTC) is in first place followed by Bitcoin Cash(BCH) in third place 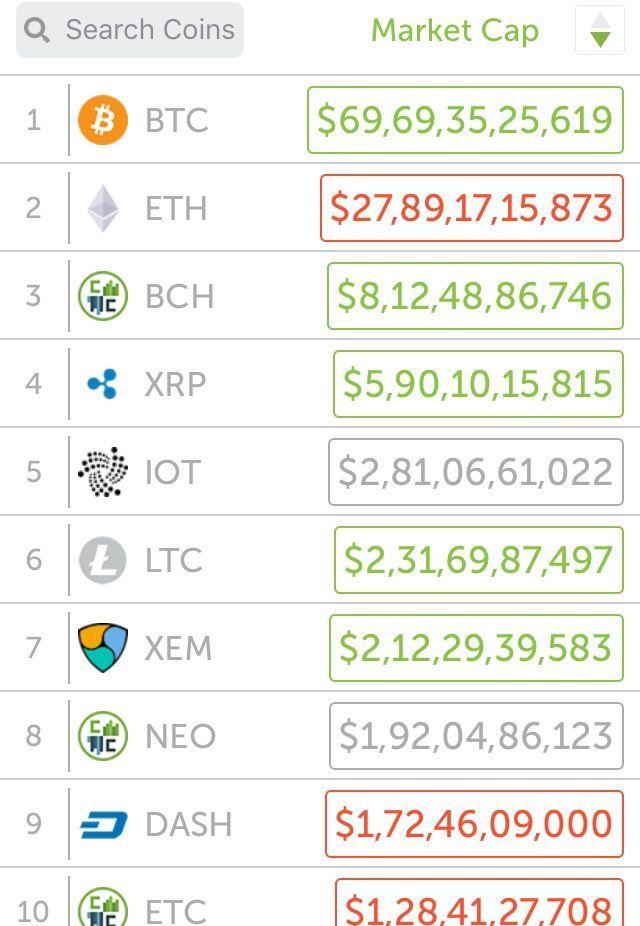 Hi paypal, BTC replaced you! They don't trust your kind of money, so as a friendly advise it's time for you to find a good coin and back it up! I suggest take a look on steem and you never regret it.