HashFlare is the next BitConnect (Hint: Stop Investing!)

oraclefrequency (45)in #bitcoin • 2 years ago 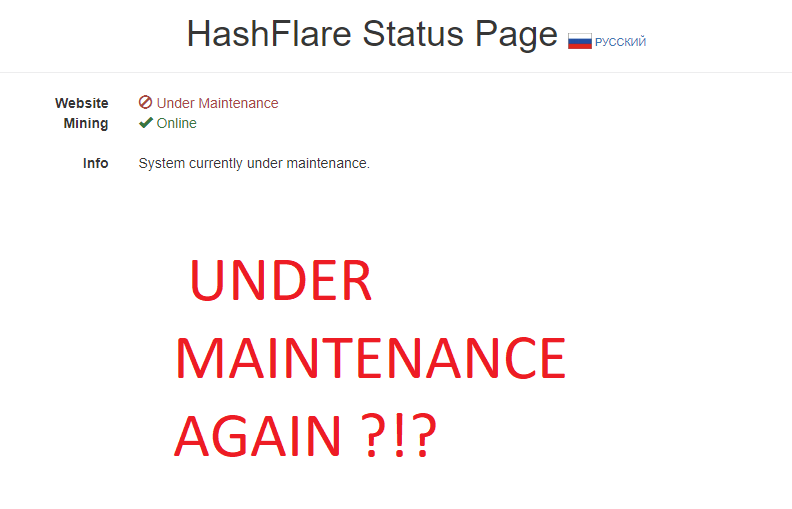 HashFlare is down for maintenance, yet again. In a post 2 weeks ago, I detailed how the company's website was down 31% of the days between Nov 1st and Dec 20th.

Then after two months of spotty service, they jacked their minimum withdrawal limit to 0.05 BTC. If you check HashFlare's twitter feed you'll notice the company has also failed to respond to 1,000's of angry tweets over the last month, asking if this increase will be lowered or if it's permanent.

Instead of reassuring their customers by giving an explanation or timetable, HashFlare's gone silent on the situation for over a month now. Apparently, they are hoping this goes away on it's own....but it won't.

Now, imagine that you purchased cloudmining with HashFlare around early December. At the time, you picked up 7 THS for $1,050 and the minimum withdrawal was 0.01 BTC

In the above scenario, the customer should have been eligible to withdraw approx every two weeks or so, but just as they would have reached their first 0.01 BTC, the minimum withdrawal was increased 500% - up to 0.05 BTC.

Instead of hitting the withdraw threshold every 2 weeks, it will be closer to 10 weeks.

And you've signed up a couple friends, but never got your referral commission...

Then you notice, you're actually being paid 1/3 less satoshi per day then when you started just a few weeks ago...

You gave the company over $1,000 thinking you'd be able to start making some of it back within the month, yet it's now going to be over 13 weeks, or 25% of the year before you will collect enough bitcoin to reach a minimum withdrawal. Is this what you signed up for?

Due to the numerous issues HashFlare's had over the last 6 months, along with their reluctance in paying their customers for the last month, I would strongly advise against investing with them until we get some answers, and more importantly, our bitcoin.

Instead, save you're money and wait on Genesis Mining to offer new contracts.

I'm so tired of these scams. All of this stuff is actually good technology. People should do good business.

Firstly, it is very easy for cloud mining sites to run away with funds from their users. Aurora Mine is a very good example.

Secondly, the authentic ones (that don't promise high returns), tend to have rather lacklustre ROIs and it is very possible to even end up with a net loss at the end of a cloud mining contract.

As always, do your due diligence before deciding whether to invest your hard earned money anywhere.

I wish they're really improving their services...

Sounds like a sticky situation. I believe that hashflare is the next bitconnect just off of the above scenarios. Ponzi scheme after ponzi scheme, but you know i never understood why people would invest in services such as these. But then agian im not as seasoned on the topic. But i did figure that bitconnect was a scam weeks before it was revealed to be.

Bitconnect is not a scam. They could not handle the pressure. They are trying to make it right and working w/ Lawyers to do so

@oraclefrequency you really need to do better research bro.

Hashflare is currently in the midst of shifting their servers and a newer version of Hashflare is supposed to come around March 2018.

Since Hashflare has gotten a huge influx of new customers they are unable to handle the current load on servers.

As for the minimum withdrawal that I really wish it goes down again after the server upgrade.

And BTC payments keep decreasing over time due to the rise in mining difficulty of Bitcoin. It got nothing to do with Hashflare.

i mentioned it 24 days befor.... see the link
https://steemit.com/bitcoin/@mmshah/beware-to-invest-in-hash-flare-mining

This post has received a 1.13 % upvote from @booster thanks to: @oraclefrequency.

This post has received a 58.82% upvote from @lovejuice thanks to @oraclefrequency. They love you, so does Aggroed. Please be sure to vote for Witnesses at https://steemit.com/~witnesses.

Always best to build your own rig and keep control and versatility of your mining investment....