The Bitcoin network compensates Bitcoin miners for their effort by releasing bitcoin to those who contribute the needed computational power. This comes in the form of both newly issued bitcoins and from the transaction fees included in the transactions validated when mining bitcoins. The more computing power you contribute then the greater your share of the reward. 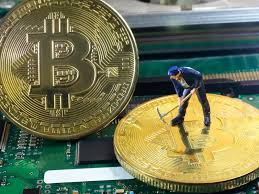 Step 1 - Get The Best Bitcoin Mining Hardware
Purchasing Bitcoins - In some cases, you may need to purchase mining hardware with bitcoins. Today, you can purchase most hardware on Amazon. You also may want to check the bitcoin charts.
How To Start Bitcoin Mining
To begin mining bitcoins, you'll need to acquire bitcoin mining hardware. In the early days of bitcoin, it was possible to mine with your computer CPU or high speed video processor card. Today that's no longer possible. Custom Bitcoin ASIC chips offer performance up to 100x the capability of older systems have come to dominate the Bitcoin mining industry.

Another option is to purchase in Bitcoin cloud mining contracts. This greatly simplifies the process but increases risk because you do not control the actual physical hardware.

Being listed in this section is NOT an endorsement of these services. There have been a tremendous amount of Bitcoin cloud mining scams.

Hashing 24 Review: Hashing24 has been involved with Bitcoin mining since 2012. They have facilities in Iceland and Georgia. They use modern ASIC chips from BitFury deliver the maximum performance and efficiency possible.

Minex Review: Minex is an innovative aggregator of blockchain projects presented in an economic simulation game format. Users purchase Cloudpacks which can then be used to build an index from pre-picked sets of cloud mining farms, lotteries, casinos, real-world markets and much more.

Hashnest Review: Hashnest is operated by Bitmain, the producer of the Antminer line of Bitcoin miners. HashNest currently has over 600 Antminer S7s for rent. You can view the most up-to-date pricing and availability on Hashnest's website. At the time of writing one Antminer S7's hash rate can be rented for $1,200.

NiceHash Review: NiceHash is unique in that it uses an orderbook to match mining contract buyers and sellers. Check its website for up-to-date prices.

Eobot Review: Start cloud mining Bitcoin with as little as $10. Eobot claims customers can break even in 14 months.

MineOnCloud Review: MineOnCloud currently has about 35 TH/s of mining equipment for rent in the cloud. Some miners available for rent include AntMiner S4s and S5s.