As we wipe the sweat from our foreheads and calm our emotions we start to look for perspective.

From an analytics point of view it is easy to look at the long term direction of a financial instrument but much harder to pick the short term movements (ordinarily that is left to the automated algorithms). The bitcoin market essentially is a stock index on steroids. Its cycles are extremely volatile from a percentage viewpoint and the bull bear cycles don't last a year, let alone 8 years like the current US share market cycle.
There are many lessons to be learned from share market investment that can be applied to the cryptocurrency market........at least for now.
The first lesson is never invest in something you don't understand. During this bear market cycle on bitcoin, we have seen every over 70 year old get a spot on mainstream media and explain why their feelings suggest bitcoin will go to zero. No discussion on the blockchain technology, no thoughts on the benefits of a distributed ledger just the basic Q&A,
"What do you think of bitcoin oh wise investment billionaire", shortly followed by the response "I think it will go to zero and its a fraud and a ponzi and every other trigger word that exists on the planet so as to not threaten my knowledge on what made me rich". All they had to answer was "I don't understand it, so I won't be investing in it". Instead they FUD with hyperbole that becomes a head line because the younger crowd are genuinely interested in this revolution we are part of.
The second lesson is a quote from the movie Wall street. "Bulls make money, bears make money, pigs get slaughtered". If you are trying to bottom pick or selling on the first sign of movement, you will lose. Trading is an essential part of the market as it provides liquidity but making non rule based decisions based on feelings generally doesn't get you anywhere. Bulls or bears, or bulls who become bears, generally have a well thought out strategy that provides them sufficient evidence to create an action.
The third important lesson is that markets don't always go up. We saw this with the DOW recently and we see it in the cryptocurrency market. A lot of people who got their fingers burned from the hype may never return to the crypto markets because of the lack of understanding that markets do not always go up. People who were buying bitcoin at 16 or 18 even 20 thousand didn't take into consideration the fact that markets do not always go up. If they still hold their coins, they are still holding value and the price will return at some stage. But those who bought at 18k and sold at 8k most likely do not understand the cycles that markets make and also gave into get rich quick hype.

Now that we have that out of the way, I'd like to highlight some technical information as presented in the chart below: 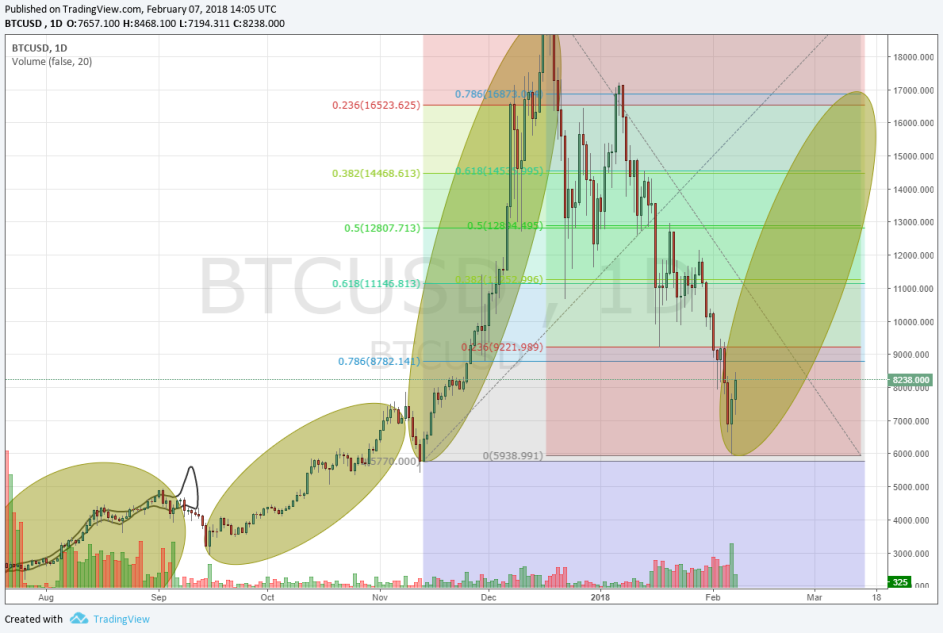 This is an image of the daily chart, all the colours and numbers might be a bit confusing if you are new to analytics but required to generate a perspective.
The baby poo brown coloured eclipses are highlighting the bull cycles the market for bitcoin has had over time. You will notice that each cycle became more intense in terms of volatility and was often followed by a relatively short drop of between 23% and 50% of the bull cycle. Then we have the "screaming bubble" bull cycle, the movement that produced a rise from around 5000 all the way up to 20000 (depending on where you are trading). It was followed by an almost 100% retracement. The people who are clutching onto their Tulip bubble chart with a tight grip don't realise that most markets (especially money markets) regularly complete 100% retracements during price discovery. This is often caused by multiple factors, the main factor being profit taking.
Now, on this chart I have drawn the fibonnaci retracement levels for both the move up, and the move down, with this down cycle being the longest of all the highlighted movements. It was slow and painful, which is why we believe it is profit taking. Since the retracement was just off 100%, the 50% level at 12889 becomes a very important level for the direction of bitcoin over the long term. A failure to get above this level will see a new lower high, and will indicate that the downtrend is here to stay. A break through it will indicate a new bull cycle has occurred and we should be looking for a trend extension, with the important extension levels being at 28447 and extreme levels at 42358.

If we factor into the equation the recent news that the US government may nurture cryptocurrency technology with soft regulations, as well as indications that the Korean and Indian markets will still be able to access crypto in some shape or form, we should look to favor the upside break during this year as the probability of a new bull market is higher than a continuation of the bear market at these price levels. This doesn't mean we will go straight up, it means that the momentum will likely be bullish. We should not expect a mania cycle like the move from 5k to 20k but a more steady and stable market, like a share index bull market.

Let us know your thoughts!