I increased the amount of Bitcoin I used to buy Bitcoin Cash by 8 % by selling it with a profit. Let me illustrate what was going on. I am still learning and improving this process, so let's learn together.

I decided to look into the BTC (Bitcoin) BCH (Bitcoin Cash) pair after reading here on Steemit on an interesting future developement:

This would generate massive interest by the masses (on coinbase), but at the same time for longer term coinbase users, the bitcoin cash from the fork at that time will be released on that platform.

I shared my point of view under the post, but the post is also worth reading and up-voting:

No comment right now that holding back the BCH at the time of the fork for about half a year in which BCH went down in value. OK, perhaps a small side story:

I think most users will sell the "free money" from the BCH release at coinbase planned for January 2018.

Here is when the fork happened (Source: my cointracking.info account - I highly recommend this tool, it's free but I use the pro version)

Right after the fork of BCH, it spiked to 0.166 BTC value. Now (after much up and down) it is 0.096 BTC. The overall Euro value is up for both (due to BTC's crazy developement) but you would have much more money if you would have sold BCH.

Which was not possible for Coinbase users. (Next time: have your coins your own wallet)

Anyways, this is why I think some Coinbase users will, when they finally get their hands on BCH, try to get rid of them for BTC at the best possible price - of course, all at the same time.

Jumping into the trade to make some profits - with my team

As I posted before, I work with a team of Virtual Assistants to do daytrading of altcoin:

Else, I would not be able to stay on top of this and still have a life.

On 11. December, my team members who are monitoring the different Altcoin for me already made me aware of BCH getting to an interesting "break out point":

And at that time, it would have been a very good time to buy BCH with fiat (dollar / euro).

After I read the steemit post mentioned before, I immediately asked my team within Trello if they can confirm to me the current "buy signal" I thought I would see. 30 min later, my VA from Serbia (PhD in Finances) confirmed:

I prepared myself in the meantime
-reviewing the prices,
-setting my exchange up, -
unfreezing my funds so that they are ready for trading...

During that time, my second VA (from Pakistan) confirmed - it was already high time before the profit train leaves! 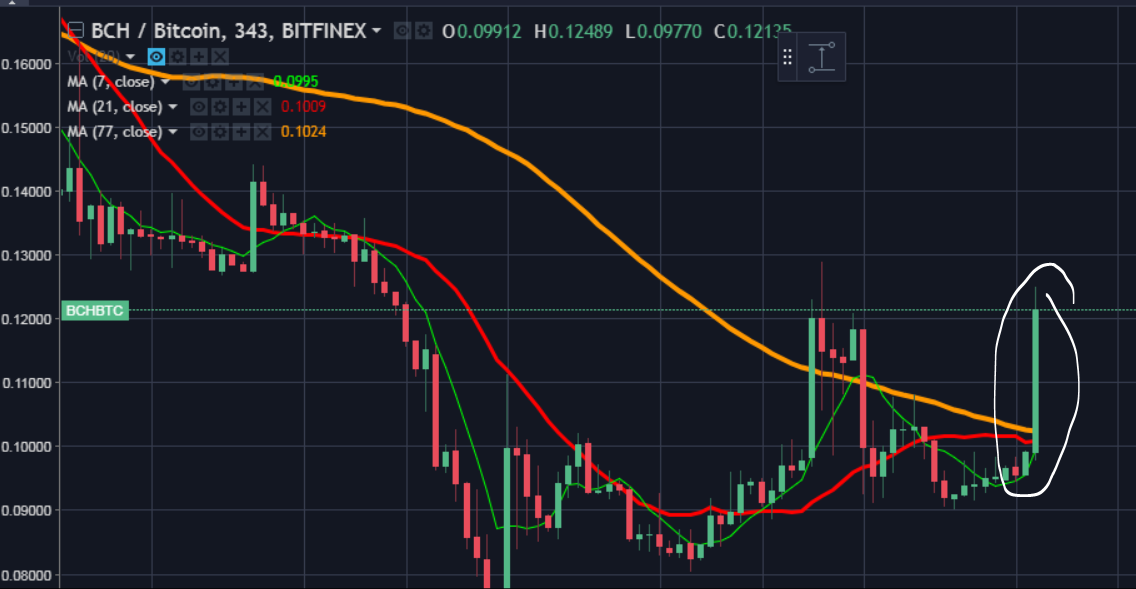 I purchased (see white note) and let it rise up, then sold when it started going down again

This led to a profit of 8% on my bitcoin.

Why did I sell? The price went up to 0.12, but then started to drop back down. I did not want to "lose" the gains quickly and decided to lock in my initial buy back with the 8% as gains.

Could I have waited longer? Not without further analysis of the price development, possibly by analyzing the "energy" or resistance levels as BK does it. Perhaps we can review those after my sale and see if it drops further or goes up much further.

As you see, even as a relative beginner, and doing it quick and dirty, I still made some profits and have now more Bitcoin than before. How much more? That will be my secret.

This is how much I made in good, hard cash:

But this is peanuts! I want to make big money!

Well, 8% is relative. If you invest 1 BTC, you have a hell lot more money. I am still learning - and if you are reading this far, so are you.

It makes sense to start with small investments to see it works, and fine tune the process. Then, increase the amount of BTC you are willing to trade.

Know that you do this at your own risk and can lose significantly if it goes wrong!

Now, I like to finish with some lessons learned for myself as a note and for you to not repeat my mistakes:

Things that went well for this trade

Things that we can further improve

This post is based on my personal notes during this trade, but I thought it might be useful to you to learn a bit by looking behind the scenes. Let me know in the comments if something makes no sense to you.

Thanks for taking the time to read this post!

The @OriginalWorks bot has determined this post by @nosebear to be original material and upvoted(1.5%) it!