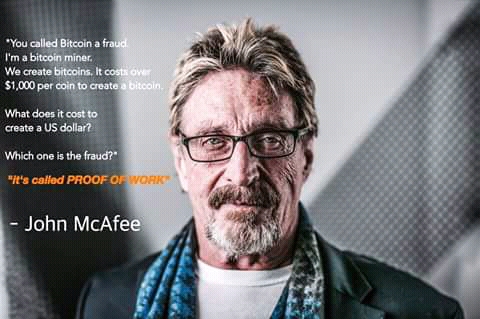 Before i dish out my own thoughts on Bitcoin, i have a few questions to ask:

1.Do you really believe bitcoin is a fraud?

2.How would something that uses alot of energy in terms of electricity and cost to mine and find be a fraud..?

Every cryptominer know what it is and what it really takes to mine bitcoins.Its one of the hardest things that someone has to work for. If mining bitcoin was as easy as A B C, everyone would be mining bitcoins on their own instead of buying or cloud mining. I personally tried mining BTC using a USB Block Erupter and it wasn't as easy as i had thought it would be. My mind would tell me that if i left my PC mining ,go to sleep and wake up the next day, I would find loads of coins inside my BTC wallet and i would be stinky rich in just one night.Instead, i only found a few satoshis ; lesser than what a bitcoin faucet or app would offer in a day.
It wasn't profitable at all. It was like i was only doing it for fun and probably for the purposes of learning.
Since i needed money ,I gave up mining bitcoin on my own and opted for cloud mining.
In the early years when bitcoin was introduced to us, anyone would mine it on a regular pc and laptop and i wish i was among those people. With its increased difficulty within the years, mining bitcoins and other cryptocurrencies on a regular computer is just a mere dream. You'd probably have to wait for more than 50yrs to get a single coin or never get any at all even with pool mining. Infact all mining pools that i know only support Asics for bitcoin mining.
Bitcoin is one of the most legit unique precious digital mineral we can brag about in our century. Its a gem and a treassure that has been increasing in value. I couldn't believe it when i learnt that at some point ,the value of 1BTC was only $2. From 2 dollars to roughly above 3k in just a few years? How? Yeah It was kinda crazy. Clearly shows there is something very special about this coin.
Its one of the best currency technologies human has ever invented and i'm pretty sure there comes a time when the entire universe will fully embrace this smart technology. And i mean every single corner and part of the world; continent to continent.
Then ,there will be no more paper money.
We'll be paying for everything and doing every transactions using BTC.
From paying medical bills to tution fee, purchasing food stuff, paying for gas,rent and every single service.You name it. There will be Bitcoin ATM machines all over and you'll only need a bitcoin hardware wallet to store your coins. Obviously monthly salaries will be paid in bitcoins.
I don't think there will be regular banks anymore.By then,all regular banks will have closed and the value of 1 bitcoin will be so expensive; probably at 100k or a million or even a billion per BTC.
As much as some people would say otherwise, in my opinion;
"No matter what,however the cryptocurrency graphs go,up or down, wavy or straight,cryptocurrency is a huge Kingdom in the making.
Bitcoin is King in the making.!

If at all we share the same thought or you agree with this, resteem and make sure to give this post an upvote.
Cheers!!