The big risk when Bitcoin miners are no longer profitable... $ 8,000 is a very important level for Bitcoin. It is a kind of make-or-brake level for many Bitcoin Miners. If the price remains around or below this level for a long time, many small miners will have to close because they are not profitable. And that brings the necessary risks.

A longer period around this level or a further decrease of the Bitcoin price can accelerate the consolidation of the miners. This makes the largest cryptocurrency in the world vulnerable to the dominance of the big miners.

Mining Bitcoin is becoming a real industry in which a lot of money is involved. There is a growing trend towards greater economies to reduce costs and increase profitability. $ 8,000 is an important level because it is a break-even level for many miners. 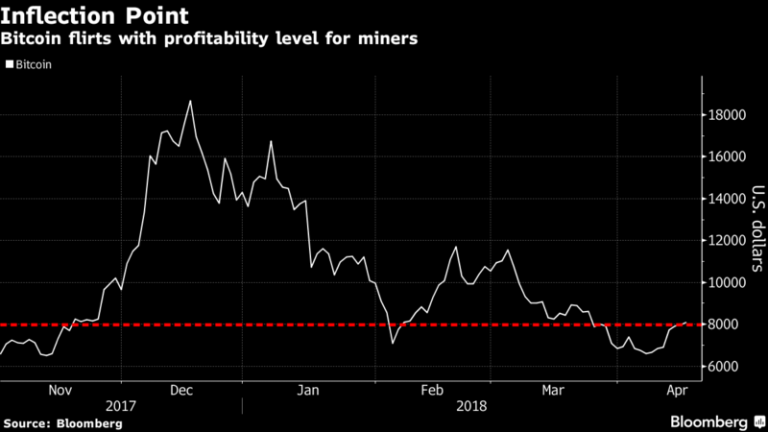 A handful of Bitcoin miners in the world

According to Bill Tai of Hut 8 Mining Corp, the financial branch of the Bitfury Group in Amsterdam, only 5 to 10 miners will remain in the world. The lower the price of Bitcoin, the faster the consolidation will continue.

Miners possess between 20% and 30% of the Bitcoins. According to Tai, Bitfury has already mined more than 1 million Bitcoins. It has already had to sell Bitcoins to cover the operating costs. When miners are forced to sell, the price will come under pressure.

With the mining power or hashrate in less and less hands, the risk also increases that the miners can launch a 51% attack. With this they could change the code in their favor.

"It has been a dangerous standpoint, since a single entity could use its power in terms of hashrate to disrupt the network."